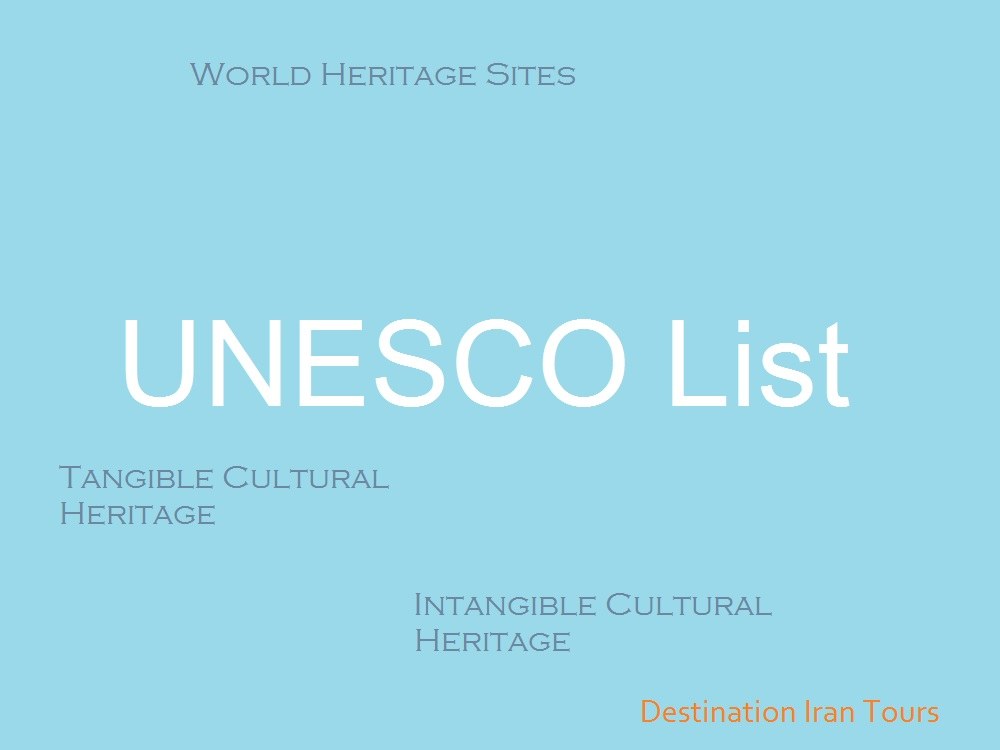 UNESCO List is a major reference as a universally recognized source of World Cultural Heritage. It covers tangible and intangible cultural heritage properties and elements among other entities. Iran has got several already inscribed there and many more on the waiting list.

The United Nations Educational, Scientific and Cultural Organization (UNESCO) selected the tangible and intangible cultural heritage of all nations and inscribes them as entities having the cultural, historical, scientific or other forms of significance. So, UNESCO makes lists of such legacies of each nation under two major lists recognized globally.

Iran, as an ancient country in the Middle East, is the home to a huge number of such legacies. Iranian Cultural Heritage, Handicrafts, and Tourism Organization (ICHHTO) is the official body for the registration and preservation of cultural heritage in Iran. Some of them are historical sites and some are cultural rituals, customs, traditions, skills, etc. They are inherited from our ancestors since several centuries ago.

In order to get to know UNESCO list of tangible and intangible cultural heritage, it’s best to quickly review cultural heritage first. All communities in the world have inherited certain lifestyle and monuments form their forefathers. Such lifestyle includes movable instances like indigenous and national rituals and traditions, skills and related crafts, religious convictions, arts, literature, and all the remained valuables. The monuments include immovable instances like historical buildings, structures, etc.

This UNESCO list covers several World Heritage Sites that are sources of pride for Iranian and attract many enthusiastic world travelers every year to Iran. They are interested in learning about the history and culture of Iran.

To learn about each of the above in details, please go to the Tangible Cultural Heritage of Iran!

According to national and international definitions, intangible cultural heritage refers to the particular behavior, symbols, skills, means, indigenous knowledge and know-how, handicrafts and cultural spaces of a nation. They are handed over from a generation to the next.

Of course, a lot more is on the waiting section of the UNESCO list or at the documentation process in ICHHTO. They will be introduced to the world sooner or later.

To learn about each of the above in details, please go to the Intangible Cultural Heritage of Iran!