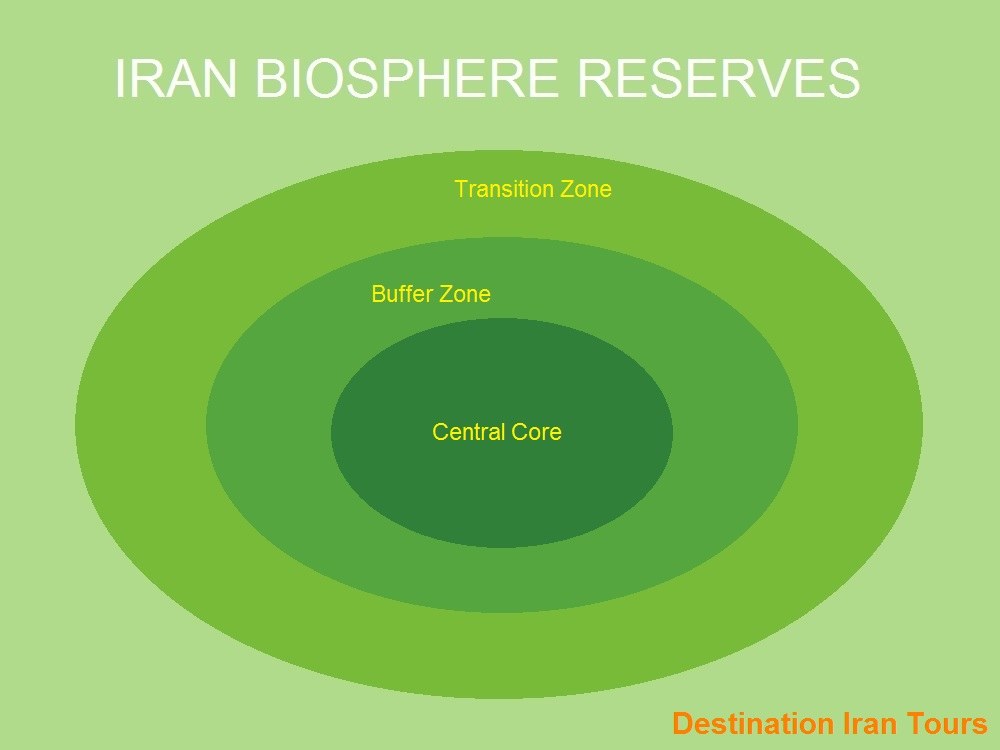 To learn more about Iran Biosphere Reserves, you have to have some general information learning about such areas first. Then, you can see why UNESCO has recognized these areas as such. So, here is more to learn about it:

The Prelude to the Recognition of Iran Biosphere Reserves

The protective program of UNESCO, known as the Biosphere Reserve, is one of the leading and effective programs in environmental protection. The program is a combination of human activities, research, and protection of the natural environment and sometimes tourism, run by UNESCO.

In the 1960s, environmentalists and top experts agreed on a new and modern idea: Biosphere Reserve. The initial idea was to announce certain areas as “Biosphere Reserves” and to identify them as the areas for both protection and sustainable development.
The idea came up in 1968 at the UNESCO World Conference on Biosphere. The conference was the first gathering and exchanging views of governments in the world on how to take advantage of nature while protecting it. Later, the other global sources and agreements registered this issue as “Sustainable Development”.

Since then, UNESCO has seriously pursued the establishment of the biosphere reserve. In this way, UNESCO was accomplishing the protection and management of ecosystem-rich areas of high plant and animal genetic richness. Biosphere reserves were also effective by considering local communities and their participatory role in the process of sustainable management and development.

What distinguishes biosphere reserves from other protected classes is the proper manner implemented in its planning and management. The manner is based on multifunctional uses and entrusting a vital and constructive role to local communities.

The planning considers the interconnection of human beings, natural resources, and sustainable use. Consequently, the conservation and protection of plant and animal genetic resources provide continuous environmental research, monitoring, and control.

Since years ago, Iran has provided different divisions to protect its natural resources, biodiversity, and landscapes with its biodiversity. For example, national parks, national natural monuments, wildlife sanctuaries, protected areas, and hunting prohibited areas are part of this category. In addition to the said areas, Iran has identified and registered 9 areas as biosphere reserves in 1976. Now, Iran has expanded the number of these areas.

Objectives and Actions of the Plan

According to the UNESCO Conference Documentation, the primary purpose of the Biosphere Reserve Plan was conservation, research, capacity building and genetic reservations as a program of cooperation between governments and the world. The program was later called MAB (Man and Biosphere).

In addition, UNESCO established a special organization in 1970. After the creation, MAB set the agenda to introduce the biosphere reserves worldwide.

The first practical step in implementing this plan was to provide a model for selecting areas and ecosystems in a way that would allow biodiversity and geographical coverage of the world.

In 1975, UDVARDY provided bio-geographical regions or provinces to the whole world in a global division. This classification was the base of the selection of biosphere storage plans.

In 1983, in collaboration with FAO and IUCN, UNESCO and UNEP, organized the first World Conference on Biosphere Reserve in Minsk. One of the valuable achievements of this conference was the presentation of an International Action Plan for Biosphere Reserves.

The action plan became operational at the eighth session of the ICC in 1984. Other important approvals of this conference were the formation of the World Network of Biosphere Reserves that all participants approved.

The World Network of Biosphere Reserves, run by six regional MAB organizations, has provided widespread coverage to coordinate, facilitate exchange information and share experiences among different countries around the world.

Before we get to know Iran Biosphere Reserves, we need to find out which organizations are in charge of such reserves.

According to the approvals of the conference of Minsk in 1995, the third international congress of Biosphere Reserves was held in Seville, Spain. The congress approved the general policy of biosphere reserves for the next 10 years.

Here is the global segmentation of Biosphere Reserve:

Features and Purposes of the Biosphere Reserves

The most important features and purposes are:

It consists of three levels of classification:

Iran Biosphere Reserves follows the same divisions you will find anywhere in the world. So, it will be useful to see how zones are allocated to such reserves.

At the center of the Biosphere Reserve, there is a central core highly protected. Another area, playing the role of a protective shield, called the Buffer Zone, surrounds the central core. In the Buffer Zone, experts monitor carefully traditional human activities such as gathering edible plants and preparing firewood for home use. At the same time, the researchers and experts can do some non-destructive research in this area.

Around the Buffer Zone, there is another area called the Transition Zone. In this latter, people implement some forms of sustainable development such as small-scale agriculture. In addition, it is possible to extract natural resources such as selective cutting and experimental research.

The overall strategy suggesting that there is a series of buffer zones and transitional zones around the core is important, as it encourages locals to support the purposes of protected areas.

The following are the biosphere reserves that UNESCO has recognized in Iran:

Threats against the Biosphere Reserves in Iran

Although the Iranian governments have developed detailed zoning plans in the past decades for tourism and conservation alongside local communities, we can see a downward trend in these areas. The pattern of sustainable exploitation of local people and the conservation of biodiversity now has changed and overgrazing in habitat, hunting, etc. has transformed the situation.

The fact is that human populations will continue to grow dramatically in the coming decades, and resources such as firewood, medicinal plants, and hunting meat will become increasingly difficult to find. Conflicts will inevitably increase as the density of agriculture and habitat increases near protected areas.

Visit of Biosphere Reserves in Iran

You can make a visit to any of the Iranian biosphere reserves introduced above. However, the best will be to arrange for special permits from the related organizations to enter these areas beforehand. In practice, the Iranian tour operators that are active in ecotourism can obtain such permits for you before you arrive in the country.

As it can be time-consuming to obtain such permits, it is highly important to make sure you have them before you start traveling to Iran.