Tabas is known as the Desert Bride in Iran consisting of several tourist attractions. It has the great and fresh gardens of sour orange, magnificent palm groves, and numerous springs. Tabas dates back to the Achaemenid period. There is also a collection of historical attractions and monuments such as the Hadarbash Tower, Takhir-e Shah Abbasi Dam, Korit Dam, Golshan Garden, Khan Caravansary, Ismailites Castle, and Tabas Castle.

This city is located in the northeast of Yazd Province. It reaches Bardaskan and Shahrud counties on the north, Ferdows and Birjand cities on the east, Kerman Province on the south, and Naein, Ardakan, and Bafq on the west and southwest. Tabas is about 690 meters above sea level.

The city is located in an area with a desert climate. The summer is very hot and the winter is relatively cold there. The average annual temperature for this city is 13˚C. The temperature difference between the hot and cold months is more than 50˚C.

The precipitation in this city is very rare and most of the months are dry and without rain. The average annual precipitation of Tabas is about 80 mm.

This particular condition has allowed Tabas to have several natural attractions around it.

There are different ways of traveling to Tabas:

The first and the shortest route passes from Tehran to Damghan, then Jandaq and Khur and after a distance of 854 km, it reaches to Tabas.

The second route leaves Tehran to Naein, after passing through Anarak, Choopanan, and Khur, and a distance of 923 km, it reaches to Tabas.

Tabas is 540 km away from Mashhad and 270 km from Birjand. The nearest county to Tabas from the northeast is Ferdows city, 210 km away, and from the southwest is Yazd City, 365 km away.

From Mashhad, Tehran, Birjand, Ferdows, Yazd, Tehran and Naein cities, there are daily buses to Tabas.

Tabas has an airport. There are flights to Tehran and Mashhad once or twice a week.

You can travel from Tabas Railway Station to Tehran, Mashhad, Yazd, Kerman and Bandar Abbas.

To travel from Tehran to Tabas, it takes about 16 hours. It takes you through Pishva, Garmsar, Semnan, Damghan, Shahroud, Sabzevar, Azadur, Neyshabur, Kashmar, and Torbat-e Heidariyeh stations, and then you will arrive in this city.

If you take the train leaving from Mashhad to Tabas, you will pass through Kashmar and Torbat-e Heydariyeh, and arrive in Tabas in about 7 hours.

If you take the train leaving from Yazd to Tabas, you will pass through Bafq and Chadormalu stations, and arrive in Tabas in about 8 hours.

If you take the train leaving from Kerman to Tabas, you will pass through Zarand, Bafq and Chadormalu stations, and arrive in Tabas in about 10 hours.

If you take the train leaving from Bandar Abbas to Tabas, you will reach the destination in about 3 and a half hours. This route passes through Gol Gohar, Sirjan, Bafq and Chadormalu stations.

Population and Economy of the City

Based on the 2016 Iranian Population and Housing Census, the population of Tabas was 39,667 people.

The coal mines in this city are among the richest national wealth of Iran. Many local people work in these mines. Therefore, they play an important role in the economy of this city.

The economy of this city is due to its location and proximity to Kerman, Isfahan, South Khorasan, and Razavi Khorasan provinces. Other factors involved are the presence of Nahrein, Korit, Darreh Bid dams and transportation facilities, railways, airways, and roads.

The vastness of the area and the various climatic zones (climate diversity) have made it possible for Tabas to have 34 types of agricultural crops and 23 types of fruit crops, including cold, temperate and tropical region products, as well as the crops in need of plenty of water such as rice.

This city has gone through lots of ups and downs. That is why Tabas has got several historical attractions today that brings many people to this desert city.

In the Achaemenid period, it was a section of Parthia (Great Khorasan), a region where most of the Ancient Persian emperors lived.

According to the documentation provided by Herodotus, the Greek historian, one of the most famous Zoroastrian cleric lived in this city. He was the stepfather of Cyrus the Great and grow him up in this area until his sixteen years old.

At the time of the Seleucid era, Tabas was away from the cultural influence and military strike of the Seleucid Empire, but at the same time, the local people paid the tribute (tax) to Izad Khast Great Garrison.

During the Parthian era, the city was an important garrison for Western borders. The different dynasties ruled in the city sometimes.

In the Sassanid period, it had the same condition as the Achaemenid period. Yazdegerd III, the last Sassanid emperor, settled in Tabas during his escape to Marv for a few months.

Throughout this time, Tabas has been the communicative center between the East-Northeast and the West. In fact, the important and strategic route from Parthia, Ecbatana, Susa, and Mesopotamia to the Pasargadae pass through Tabas. Several fortifications and Chapar Khanehs (ancient Persia’s post offices) were constructed along the road of which some remnants are still there.

During the post-Islam era, In 650, the Arab Muslim Corps entered this city and conquered the city. During the rule of the Umayyads and Marwanids, local people paid heavy taxes. The reason was that the hot and difficult-to-pass central desert was a natural and difficult obstacle to passing the troops and equipment.

Tabas was one of the major centers of the Ismailites in Khorasan during their rule. The Ismailistes settled down on Tabas and built many strong fortresses on Tabas Mountains.

The Mongol invasion did not damage Tabas and the city welcomed many immigrants at this period.

In the last days of the Zand dynasty, Lotf Ali Khan suggested the construction of Golshan Street during his travel to Tabas.

In this period, Tabas flourished economically. The construction of magnificent buildings, gardens and pavilions, water reservoirs, large and clean bathrooms, mosques and Tekyehs dates back to the Qajar Era.

During the reign of the Pahlavi dynasty, the majesty of Tabas declined. The devastating earthquake struck Tabas in September 1979 and destroyed many parts of the city.

This city has got several historical wonders of which we introduce some here:

Hadarbash Tower
In distant times, local people have built the towers, called Hadarbash, for protecting and maintaining their palm groves. The towers protected the agricultural lands against the influence of robbers and wild animals. The date of construction of this tower is still unclear. 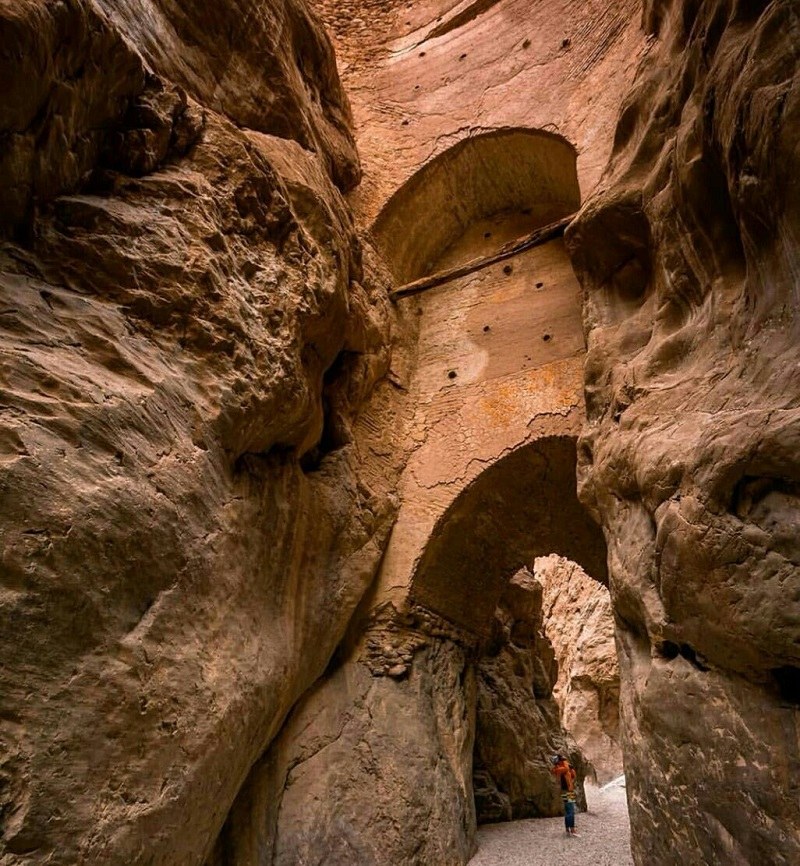 The architects have constructed the dam in a way that no sediment is stored behind it, and we can expect that this unique structure will perform perfectly without maintenance and management for thousands of years. Takhir-e Shah Abbasi Dam is also known as Taq-e Abbasi among the local people. This dam is more than 700 years old. 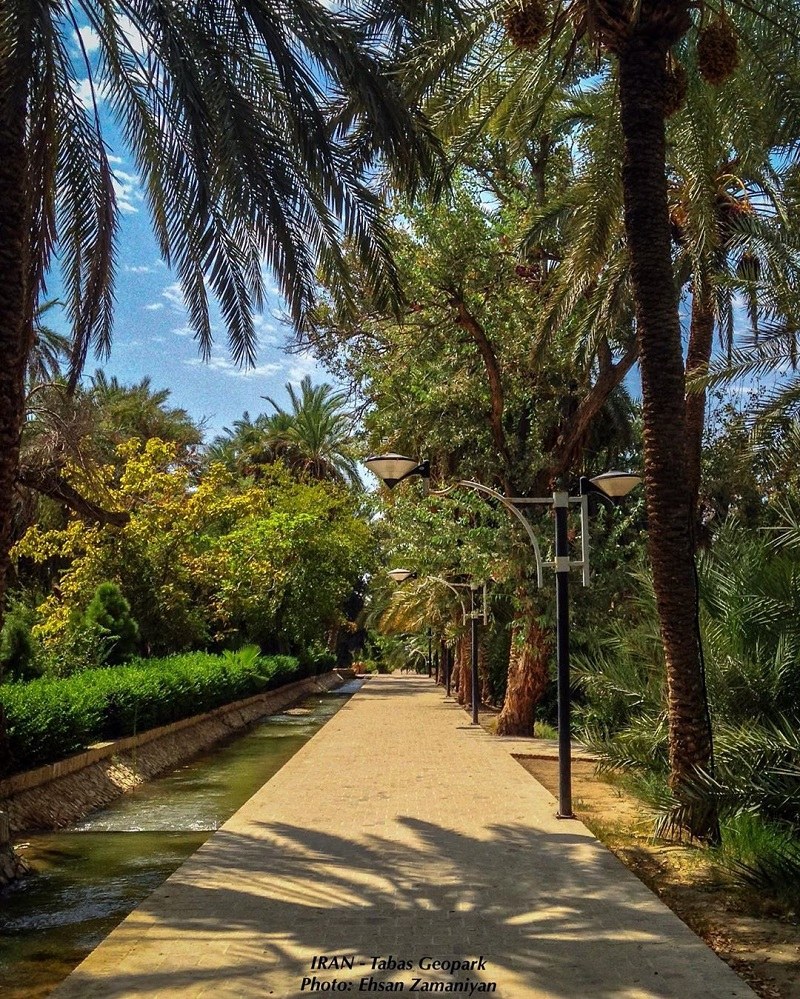 It is a garden in the middle of the desert! This complex is one of the rare Iranian gardens with a constant flow of water and a major historical attraction of Tabas. The third Afsharid ruler of Tabas built this complex under the command of Nader Shah. The devastating earthquake of September 1979 destroyed the entrance building of Golshan Garden, but the Iranian government has constructed a building with the same plan in the same place.

Imam Zadeh Hussein ibn Mussa ibn Kazem
The construction of the initial building dates back to the 11th century. In 1979, the earthquake destroyed the building, but the Iranian government restored it after some time. 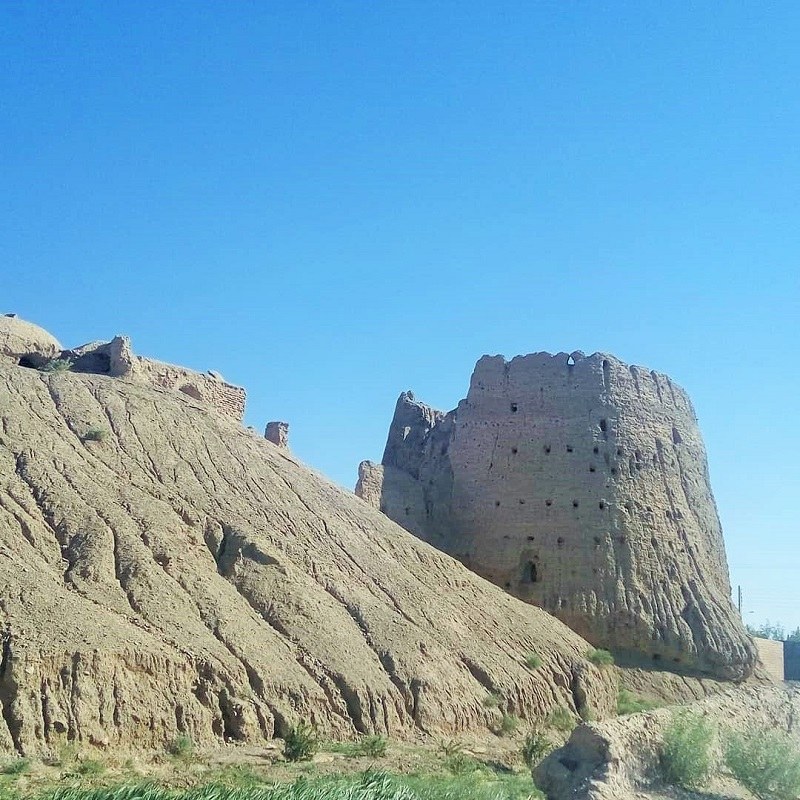 This building dates back to the time before the advent of Islam in Khorasan. It is also called Masina Castle. In the east, west, and north of the castle, there are just mountains, and we can see nothing except the summits. However, Tabas Plain is located in the southern part.

There are several interesting places to visit outside the city including: 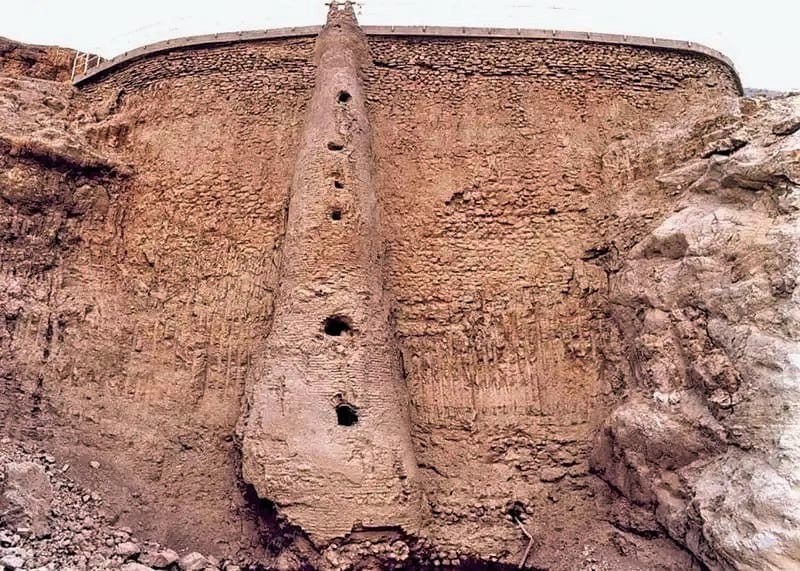 With a volume of more than one million m3, this reservoir has supplied the water of the lower villages since the past and has contributed to the development and livelihood of local people significantly. The dam is located 42 km away from Tabas City, and unfortunately, there is no information about its construction history.

Khan Caravansary
This building is located on the Tabas-Yazd Old Road. The distance from Tabas is about 30 km. This building is rectangular and has a wind catcher and a Shahneshin.

Ismailites Castle
In general, such castles are historical attractions you may find on the Alborz mountains. This building dates back to the Seljuk era. It is also one of the strongest monuments built between the mountains of Tabas County. It is located near Kharavan.

Here is a list of beautiful places in nature close to this city: 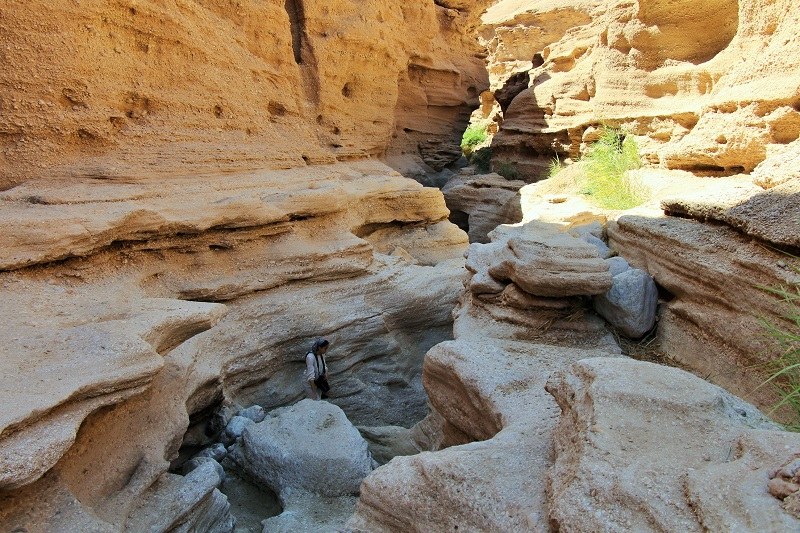 The area dates back to hundreds of years ago. There are water channels and pits in the valley which date back to 1500 years ago, the Sassanian era. There is a spring inside the valley in which hot and cold waters flow simultaneously. 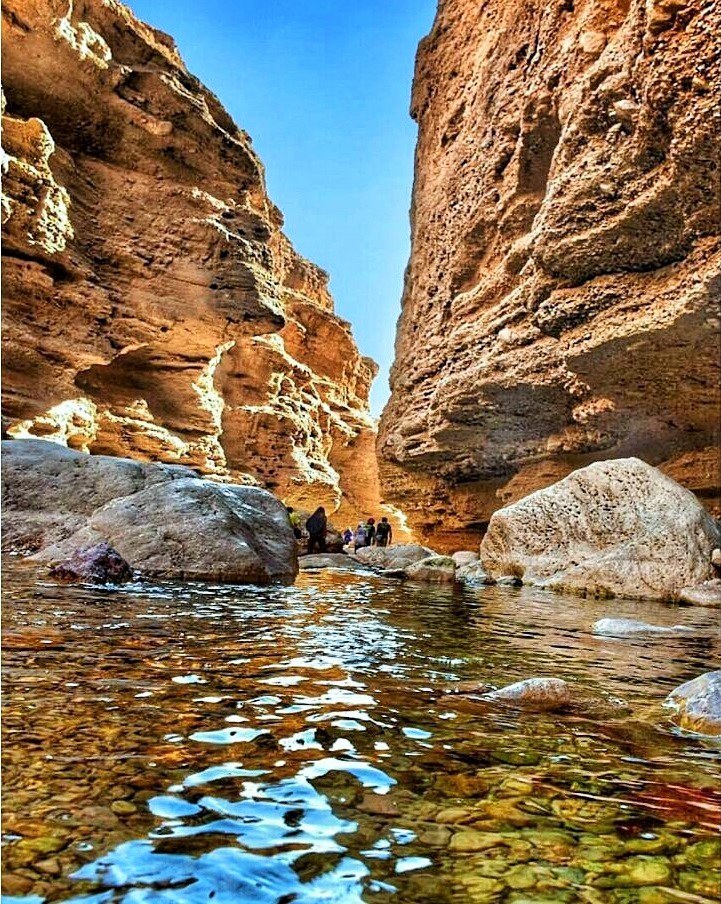 This natural spring is quite amazing as it pours out both hot and cold water. It is 27 km away from Tabas on Kharv village route. 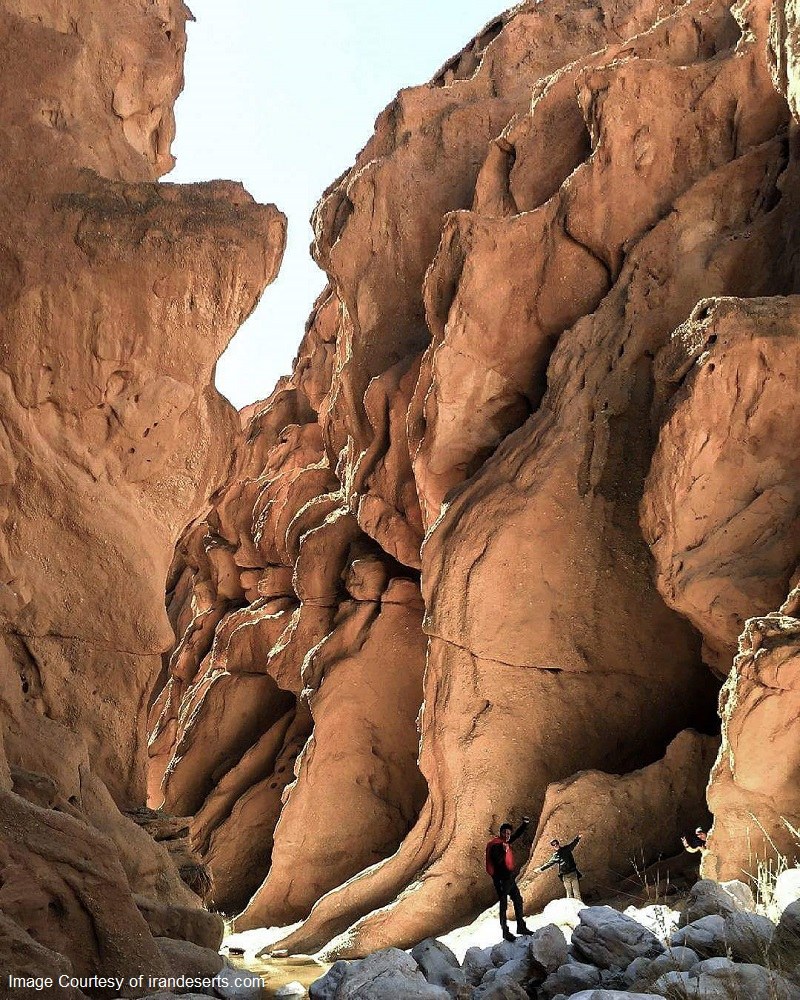 This area is an ancient valley close to this city, also called the valley of jinn. The archeologists have found some signs of the Sassanid period. This valley is located in the north of Tabas, near Azmiqan Village. This is a mysterious land and a natural attraction of Tabas. The old natives believe that it is the territory of jinns and one should not travel alone there.

Halvan Cave
The site is located in the Halvan Village, 75 km west of Tabas City. According to archaeologists, the cave dates back to 160 million years ago, belonging to the middle Jurassic era.

Halvan Desert
Beyond Halvan Village, there is a sandy desert called Halvan. The desert has salt and clay marshes and various vegetation.

Seno Forest
This area is precisely located 24 km from Tabas City and has difficult-to-pass heights. The researchers have identified 800 different plant species in the area. Despite the nature of this city is in the middle of the desert, it is a remarkably amazing natural attraction of Tabas to have such a green area.