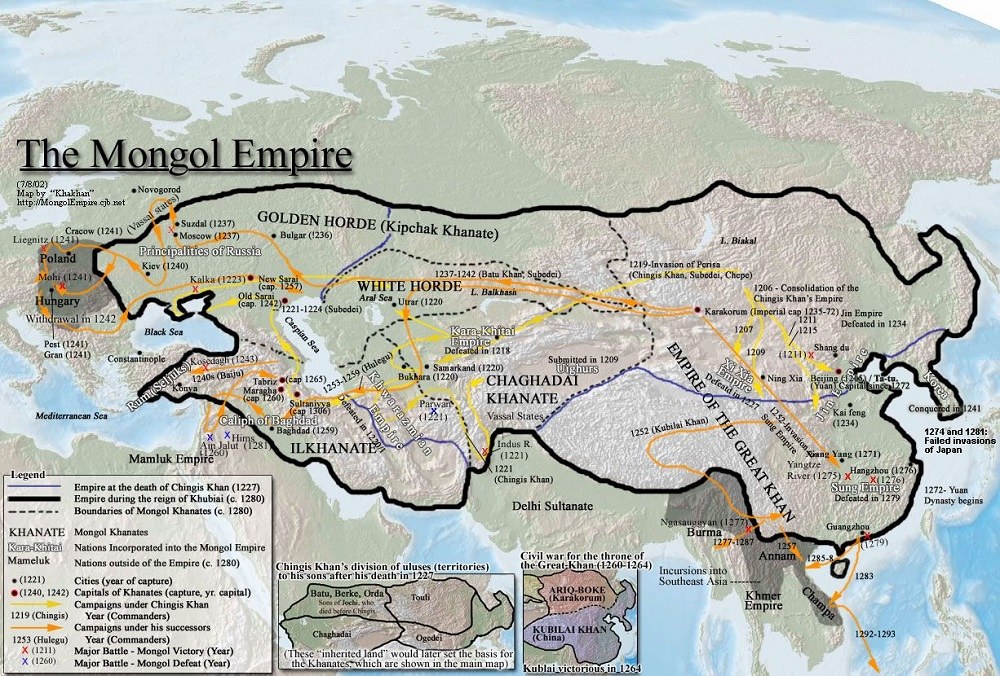 Before you read about the history of Ilkhanids, you need to know who Mongols were. There were various tribes living in the eastern part of the Transoxiana. “Mongols” was the name attributed to the union of these tribes. Some historians believe that they had been the descendants of Huns. If it is not true, one can at least compare their skills in archery, combativeness and using daggers with Huns. Also, the devastating invasion of Khorasan and Iraq, as well as their consequences, were some reminders of the Huns and their treating neighboring nations.

Chengiz Khan led Mongols’ army in attacking Iran. What he accomplished in Iran was revengeful devastation and plunder. After 40 years, when another Mongol leader called Hulagu invaded Iran for the second time, he founded Ilkhanid dynasty. By word, Ilkhanid means a system in which the heads of tribes rule.

Chengiz Khan sent some Muslim Mongol merchants with friendly messages to Kharazmians. There were rumors spreading everywhere in Iran that they had been spies. Authorities ordered all 400 of them to be killed and their presents to be confiscated. Later, Chengiz sent his emissary to Iran with an objection message. He was also killed. These events drove Chengiz extremely outrageous and caused him to wage a deadly dreadful invasion on Kharazmians’ territories. The army of Mongols wiped out all cities in its way.

The innocent people of a vast area of Iran and Iraq were massacred by his revengeful attack. This revenge had not targeted Kharazmians. It had directed its deadly blow toward ordinary innocent people in a larger scale incomparable with the death of his 400 people.

Iran had to suffer from this attack and its consequences for 40 years before a second invasion was led by another Mongol, Hulagu. The Mongols invading Iran under Hulagu’s command were different from those under Chengiz’. Compared to Chengiz, they were more familiar with Iranians and their culture and beliefs. So, they treated Iran’s inhabitants more skillfully.

Before the second invasion of Iran, Hulagu knew he should have put an end to the rule of Baghdad’s caliph and Ismailis’ threat. Therefore, despite the submissive messages from the heads of Ismailis to Hulagu, he seized and shattered their fortresses. Baghdad’s caliph sent presents to him and tried to cast fear into his heart about attacking Iraq, but it did not work.

Abbasids’ capital was soon attacked and plundered. Abbasid caliphate system was brought to an end by Hulagu’s attack. They had also underestimated the military power of Mongols.

After dethroning Baghdad’s caliph, Hulagu proceeded further to the west of Asia and even reached Syria and Palestine. Hulagu and his Christian wife had planned to join the crusaders to exterminate Muslims. But Hulagu’s brother died and he returned to Mongolia. Then, he divided the conquered territories among his sons and obedient commanders.

Hulagu initiated the reconstruction of the devastations afterward. So, Hulagu founded Ilkhanid dynasty this way in Iran and declared Maragheh as his capital. Hulagu ruled over the areas that today comprise Iran, eastern Iraq, western Afghanistan, and Turkmenistan.

The history of Ilkhanids indicates that Abaqa Khan continued Hulagu’s plan in joining crusaders, but he suffered a major defeat from Egyptians. Disagreement over the throne began among Mongols. Immorality, debauchery, and sensuality were leading Mongol Khans to decline.

Ghazan Khan converted to Islam, disobeyed the orders of Mongolia’s Khan and changed the policies of his capital, Tabriz. Also, he ordered the destruction of churches, synagogues, and temples of other religions. Therefore, he encountered many dissidents among Mongol commanders and princes. Mongol’s prestige had been tarnished as a result of military failure against Egyptians and Mongol Khans’ conversion to Islam.

Ghazan Khan’s brother, Oljaitu converted to Shiite Islam and changed his name to Khodabandeh. He committed himself to execute Sharia, Islamic law, and Ghazany justice law. He founded Soltaniyeh near today’s Zanjan as his capital. Like other Mongol khans, he attacked here and there militarily, sought the pleasure of drinking, and led a life full of dissipation. He died quite early in life because of this.

Abu Saeed succeeded Ghazan Khan. There were increasing debates about the ownership of lands and properties toward the end of Ilkhanids’ rule in Iran. He was also a morally corrupt king who infringed the rights of people. After Abu Saeed, the Ilkhanids’ government began to decline.

Fighting over power and various conspiracies aiming at gaining power made their government less authoritative and powerful. As Malek Ashraf, the next Khan was murdered, Ilkhanid era also ended and the khanate broke up into small states ruled mainly by Iranians.

Under the Ghazan Khan, Ilkhanid dynasty became independent of Mongolia’s Khan. The communication system went through some reorganization process. The army was reformed. Although new Mongol elements were infused in both art and architecture, Iranians continued their culture in their own ways. Along with Mongolian, other languages were also employed like Turkish, Persian and Arabic. The history of Ilkhanids witnesses some poor administration during the the later part of these invaders.

All through the Mongols’ reign in Iran, the history of Ilkhanids is a witness to the fact that Iranian ministers were the ones who took care of administering the country. The people who did the ministerial job were all Iranians and the job was very critical. Except for one of them, all other ministers were ordered to be killed by Khans and their properties were confiscated to compensate the budget deficits.

New systems of taxation were introduced. The rulers financed Ilkhanid government by what was gained in wars, customs offices, and taxations. Foreign trade was relatively flourishing. This could create part of the governments’ financial needs.

The governors of various parts of Ilkhanids’ empire presented different gifts and bribes to the khanate court. They collected some direct taxes from people. Of course, because of corruption, tax collectors generally took parts of such taxes or all of them before they got to the treasury.

Interesting Points about The History of Ilkhanids

Mongols converted to Islam and could not force or inspire the conquered nation, Iranians, with their own beliefs. Instead, Iranian culture and beliefs inspired and overwhelmed them. Ilkhanids tolerated other religions and did not force anyone to convert to their religion. Under Ilkhanids, the followers of all religions were free to practice their faiths in Iran.

As a result of Mongols’ conversion to Islam, new trade between the west and the east began. Silk route emerged under Mongols’ reign in a more substantial manner. Chinese silk and Indian spices were carried to Europe. On the other hand, European goods reached all along this route. Christian missionary delegations also traveled on this route to attract Mongols’ support of crusaders.

Some fields of study grew considerably in Iran like astronomy, mathematics, and medicine. Poetry and literature flourished a lot during Ilkhanids. Some of the world-class Iranian poets belonged to this period. Hafez, Sa’dy and Molavay (Rumi) were a few such examples. These accomplishments in Persian literature owed to the influence of pre-Mongols’ civilizations present in Iran. The effects of Mongols’ destructions and massacres became more evident in Iranian communities after some generations.

Under Ghazan Khan, various crafts and sciences thrived. He had a remarkable knowledge of the history of ethnic groups and nations of his time. Therefore, historians wrote valuable books. He also ordered the construction of several huge structures in his capital, Tabriz, like mosques, madrasas, khaneqah, palaces, bathhouses, etc. Although Ilkhanid architecture was the continuation of Seljuk archetype, a new combinational architectural style emerged as a result of building such huge structures.

Textile industry thrived during Ghazan Khan in some cities like Tabriz, Yazd, and Kerman. The merchants of Western Europe were the customers of Iranian textiles. Some Mongolian tastes could have been seen in this art as a result of Ilkhanids’ presence as well.

Music and painting also flourished a lot during the reign of Ilkhanids. Several schools of Persian miniature emerged and the major workshops in large cities followed their own local tastes.

Common people suffered a lot from the oppression applied to them by Khans and their officials. They were under the pressure of high taxes too. Drought and poverty had been imposed on Iranians. There was a serious class difference between the poor and the rich. A few people lived relatively well and the rest lived miserably. Still, the number of the poor was increasing due to the lack of birth control.

Poverty and instability dominated the lives of many during the history of Ilkhanids. They served as some major causes to lead people toward Sufism. Hence, people built more khaneqahs and the community of Sufis grew. Mosques and madrasas also flourished as they were reliable sources of income for theologians.

Low ethics and corruption had caused prostitution to grow. Some wealthy people forced the poor to sell themselves in brothels. Some free women also had to work in such places because of poverty. These places were called “Kharabat”. Kharabats paid a special tax to the government. Under Ghazan Khan, Kharabats were working very actively.

So, he set some rules and regulations to prevent the expansion of such houses. For instance, the owners of Kharabats were not allowed to force women to prostitution or prevent them from leaving the job. Of course, this could not reduce the scale of prostitution, gambling, and drinking in Kharabats.

Toward the end of the Ilkhanids’ rule in Iran, decentralized states were subjects of chaos for a long time. As this system prolonged, local clashes and battles occurred, administrations faced lack of order and discipline and the state of unrest prevailed as an outcome of instability.

What was prevailing throughout all the incidents during the history of Ilkhanids was the dominance of ignorance, corruption, hypocrisy, and lie. This continued as a consequence of Mongols’ invasion though Timurids era until Safavids came to power. To relieve from such conditions demanded unity, which did not happen till Safavid’s period.

Bazaar of Qaisariye in Lar, an Archetype for Iranian Historic Bazaars