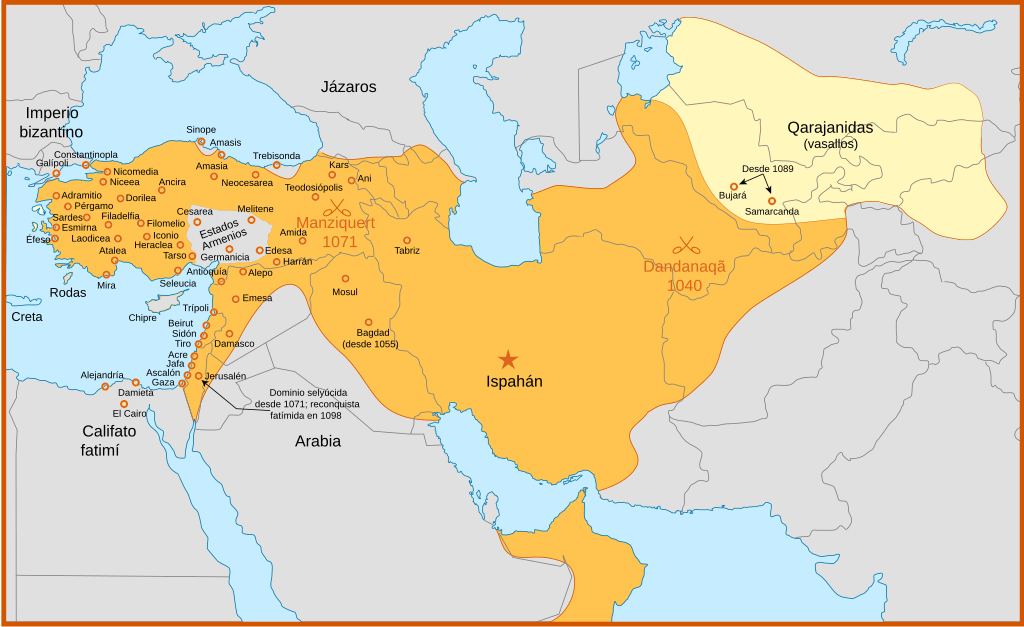 The history of Seljuks in another post-Islam era in Iran that begins with Togrul Beg and his brother, Chaghri Beg. They were from the Turkmen tribes who gained victory against sultan Masood the Ghaznavid and founded Seljuks’ government. Such Turkmen tribes had converted to Sunni Islam in the 10th century. The army of Togrul Beg invaded several areas of Iran and occupied the cities his army had seized.

Around 400 years after the collapse of Sassanians, Seljuk (also spelled Seljuq) Turks extended the borders of Iran to the areas ruled by Sassanians within almost half a century. They supported the caliphs’ authority in Baghdad.

History of Seljuks & Their Administration System

In the military domain, Seljuks were dependent on Turks and Turkmen elements. In regards to administration and political systems, like Ghaznavids, they were also the heirs of Samanids’ traditions and rituals. They also used the Persian language in their administration.

They even grasped and spread Iranian culture and Sassanian heritage all over their new realm of the ruling. Yet, their tendency toward decentralization and constant occupation in war and desert dwelling were more of a reminder of the Parthians. They were very unfamiliar with the aspects of city dwelling and civilization.

The rulers of this historical era considered ministries a hindrance in the way of their tyranny and power implementation. Most of the people who served them as ministers were Iranians. They killed their ministers or had them killed or handed them over to the enemies or confiscated their properties several times.

This reflected the Turkmen spirit of desert dwellers who could not comply with order and discipline and were filled with interest in plunder and tyranny.

Various decentralized parts of their empire were supervised by the king who was called Sultan. They carried out this supervision through an administration system called Divan, an inherited system from the time of Sassanians.

Seljuks spent part of the income they had made by their looters and bandits on repairing and securing roads, building bridges and rabats. In fact, these rulers had to do so because, without such infrastructure, they could not succeed in supervising the execution of their plunder-like orders.

The court and Divan formalities were the integral parts of this system. For example, they were the patrons of Persian literature with particular emphasis on poetry and poems. Consequently, they had to observe the essentials of justice and support the principles of Sharia (religious law). Of course, they succeeded in this more than Ghaznavids. The main reason for this successfulness was undoubtedly the key influence of such supervision system and some wise ministers like Amidolmolk Kondory and Nezamolmolk Toosy.

Ismailis were always a major threat to the security of Seljuk sultans. They had built forts at the top of the mountains to reside in at quite remote areas and inflicted deadly blows to the body of Seljuks’ government. Their methods included the dispatch of their agents to assassinate Seljuks’ high ranking officials.

The followers of Ismailis, this Shiite Muslim faction (Seveners), had different names in various parts of Iran like Bateni, Qermati, Saba’ie, etc. They had turned to be the terrifying nightmare for the Seljuk invaders.

Outside the borders of Iran, the major threat to their government was Fatimid dynasty ruling from Egypt. They were the Shiite Seveners who claimed the caliphate of the Muslims in North Africa. The founder of the Fatimid dynasty, Ubayd Allah al-Mahdy was proclaimed the Muslim messiah, Mahdy.

The history of Seljuks is full of military invasions, brutal treatment of other nations and devastations here and there. Togrul Beg conquered areas like Khorasan, Gorgan, Tabarestan, and Azerbaijan within Iranian border. Then, He seized Baghdad and strengthened his governments’ position and bonds by marrying to Baghdad caliph’s daughter.

After Togrul, Alp Arsalan, son of Chaghri Beg, came to power. Right from the very outset of his ruling, he set off for what he called Jihad against the nations like Georgia and Armenia. Then, he waged war against Byzantium. Two years later, he died when he was on the way to attack Samarqand.

Malekshah, son of Alp Arsalan, replaced him afterward. He gained control over Kerman by killing his uncle. Enjoying his Iranian minister and counsel’s (Khajeh Nezamolmolk) advice, he later seized Damascus, Antioch, Halab, and Samarqand. He spent most of his life in pleasure and hunting. Instead, he assigned the empire’s affairs to his minister.

As long as science and literature promotion is concerned, the history of Seljuks, in general, is considered a distinguished historical era in the history of Iran. With the influence of their Iranian ministers, they built several schools (Madrasas), created scientific and literary works, and developed various arts.

Iranian architecture went through a renaissance. One can even consider the architecture of the following period, Ilkhanids, the continuation of Seljuk architecture. Religious dancing became popular among Sufis. Artists invented various musical instruments and made beautiful melodies were made.

Kahjeh Nezamolmolk Toosy was a patron of building many schools in Iran. They called such schools Nizamiya after his name. The most well-known of such schools is Baghdad’s university by the same name. Baghdad’s Nizamia gained such a reputation later that even the western world learned about it.

Under Seljuks, each major city in Iran had one or more schools. People showed a great deal of interest in financial help to build and maintain schools. All these schools, which were religious, increased factional differences and triggered many clashes among people.

Such disagreements among people deprived them of the capability to be united against enemies in Transoxiana, Khorasan, and Iraq later. Sufism suffered from a similar disagreement too. The outcome was to go away far from the principle of tolerance and unity among Iranians.

Of course, Kahjeh Nezamolmolk Toosy was not the pioneers of the school building in Iran. Before Seljuks, several religious factions built up schools to promote their religious doctrines.

A lot of positive achievements during the history of Seljuks were because of their Iranian ministers. Of course, the original spirit of Seljuks led to some negative consequences as well.

For example, according to the literature of the Seljuk era, there existed all sorts of corruption, prostitution, and homosexuality happening in Iran under these rulers. Unfortunately, there were lots of beautiful and handsome Turks for sexual exploitation in the army and court as well as among merchants and scholars. It was even more widespread than the time under Ghaznavids.

After Malekshah died, his two sons disagreed on who should rule. This was the beginning of the decline of Seljuks. Therefore, their government was disintegrated and divided between them. None of them accomplished any remarkable task during their reigns. One of them, Mohammad Shah, dispatched his army to Syria to fight against the Crusaders after a period of clashes with Ismailis (sometimes, he won and sometimes he lost those battles). Eventually, the battle in Syria wasn’t a success.

After Mohammad, his son, Sanjar, ascended the throne. He was the last Seljuk authoritative sultan. He declared independence in Khorasan and presented his nephew with the right to rule over Baghdad.

Sanjar fought against the king of Ghazni and won the battles several times. Toward the end of his life, he faced a major revengeful uprising by the people of Ghazni. He lost Khorasan to them. During this period, Ismailis also performed more assassinations.

The other successors of Sanjar each ruled only for a short while. Ultimately, Kharazmshahian’s power increased in the Khorasan region and other events led to an end of the history of Seljuks and their ruling period in Iran.

The Cultural-Natural Landscape of Ramsar