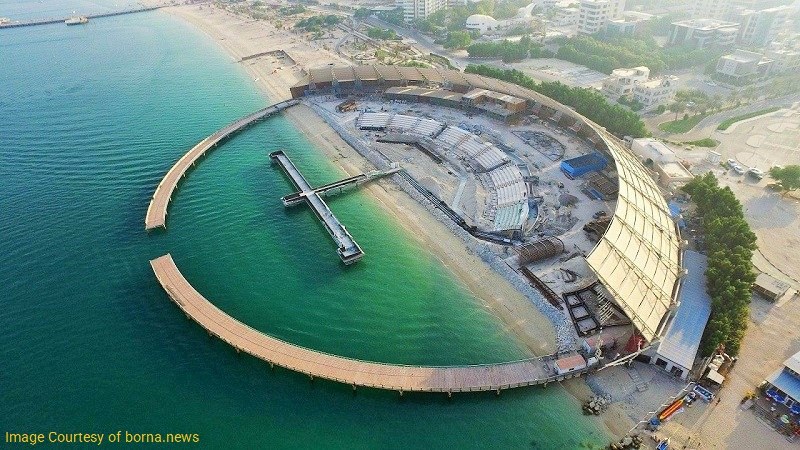 Kish Island is a very popular island in the Persian Gulf, both for Iranians and non-Iranians. Not only is it an interesting tourist destination with modern attractions, but also it has several historical and natural attractions. Before you visit Kish tourist attractions, make sure you learn about this island first.

When it comes to the modern aspects of a tourist attraction, there are lots of luxury hotels and shopping malls there. Lots of Iranians visit this island and visit such places. Because of its favorable weather in the wintertime, it’s best to visit the island before the hot season begins. Check out Kish island’s temperature before you travel there.

This island is a district of Bandar Lengeh County in Hormozgan Province, southern Iran. The island has an oval shape on the map. The highest point of this Island is about 35 meters above sea level. The climate of this island is hot and humid. The average annual temperature of the island is 26.6°C. The highest monthly rainfall is in March and November there. The average annual precipitation on this island is 6,44mm. The aerial distance between Kish and Tehran is 1052 km. The island is 250 km away from Bandar Abbas, 90 km from Bandar Lengeh, and 28 km from Hendurabi Island.

In addition, the nearest Iranian port to Kish Island is Bandar-e Aftab, which is 13 kilometers away from this Island. There are small ships for moving passengers from Bandar-e Aftab to Kish. There are daily direct flights from Mehrabad Airport of Tehran to Kish at different hours. It takes 90 to 120 minutes from Tehran to the island by airplane. Traveling by airplane is the best and easiest way to reach Kish. In addition, the cities such as Shiraz, Isfahan, Tabriz, Yazd, and Mashhad have direct flights to this city.

According to the 2016 census of the Iranian Population and Housing Organization, the population of the island was 41,258 people. Kish’s economy is based on tourism and business. Approximately 1,700,000 people visit the island every year. Many islanders are engaged in construction. Since this island is a free economic zone, there are exports and imports of various products in this city. It can be said that the best source of income for the residents of this island is tourism. Lots of businesses (from shopping malls to hotels) depend on this source of income.

As of the Achaemenids era, and then the Parthians and Sassanids periods, Kish Island had been under the rule of Iranian governments. Later and by the Muslims’ arrival in Iran, the Umayyad dynasty took control of the island. The concrete rule of Iranians on this island is evident in letters written in the Pahlavi language.

Since the Buyid era, Iranian recaptured the rule on Kish. Then, the rule of Iranians on the island continued during the period of the Seljuks and Atabakan dynasties, and then Muzaffarid and Timurid dynasties. In the Seljuk period, this island changed into the largest trading center in the Persian Gulf.

In 1971, a board of Iranian and American consultants chose the Island as an international tourist destination. In 1983, the Iranian government chose this island as the first free economic zone in Iran.

The travelers who visit this island seek historical and natural attractions. Besides, as the island is well-known for its luxury hotels, modern shopping malls, and entertainment opportunities, many love to go there. The best time to visit this island is in the wintertime. Before you go there, make sure you check out Kish temperature and plan to go when it’s pleasant.

The ancient city is 800 years old and covers an area of 120 hectares. In the past, Harireh was a great and flourishing city of Kish Island. The golden age of Harireh City was from 978 to 1506. The remnants of this city date back to the Sassanid and early Islamic periods.

This house is located in Harireh City. The house represents the Iranian old houses near the Persian Gulf. The construction dates back to the Ilkhanid era. In the construction and decoration of the facade of the house, there are star-shaped tiles that are the symbols of wealth and luxurious life.

This village is one of the most ancient and beautiful villages on Kish Island. Baqu Village is a natural and intact symbol of the lifestyle of the first inhabitants in Kish Island. There are two ways for reaching to Baqu Village:

This ship belongs to Greece. It is stuck in the mud on the Beach of Kish Island for an unknown reason. Some parts of the ship are rotten, but it is still a spectacular sight to see the sunset.

In the past, Iranians used Kariz for managing ad leading the underground water. The Kariz of Kish was built precisely for this reason. It has 45 meters in depth and 15 kilometers in length. The 8-meter-high ceiling of the Kariz is full of fossils, oysters, and corals, dating back to between 260 and 560 million years ago.

With a history of approximately 200 years, this house has completely native architecture, it is built in one of the oldest neighborhoods of Kish. In addition, the house has become an anthropology house in 2015. In this historical house, you can learn about the professions and lifestyles of the indigenous people in the past. Also, you will be acquainted with the old tools used for fishing, baking, storing, and preparing dates.

Here are Kish historical attractions outside the city:

This island is one of the districts of the island. It is about 28 kilometers away from Kish city. There are very few people living in this area. Their occupation is mainly fishing.

You can find more of Kish tourist attractions in its nature:

The hawksbill sea turtles arrive on the protected areas of the southern and western coasts of the coral island of Kish from March to August for nesting. If you go to this part of the island in these months, you can watch the turtles swimming to the beach and ditching the land for nesting, of course from some distance.

In the northern part of the island and in a region known as the Portuguese Valley, there is a complex of the same name constructed around one of the oldest trees in Kish Island famous for the Green Tree. The tree is a sacred fig and is about 600 years old. For many, this is one of the most wonderful Kish tourist attractions. Therefore, it has got quite a reputation among Iranians.

Other Attractions of Kish

Finally, here we will introduce other attractions at your disposal in Kish Island:

There are more than 100 reptiles living in the Reptiles Exhibition of Kish. The exhibition is located next to Ahuan Park (Deer Park) and is a great opportunity to visit both attractions. With an area of 2 hectares, Ahuan Park has 17 cages for keeping all kinds of animals. There are also some species of Australian birds kept in Ahuan Park.

There are about 50 species of birds in the Birds’ Garden of Kish. In the other part of the park, there is a saltwater aquarium where all types of marine mammals are kept. Dolphins show and classic show are the other attractions of Dolphin Park.

The center is operating since 1992. In this diving center, there are recreational diving training courses. After completing the 15-minute theory session, you will be ready to go underwater. The center offers a variety of different diving tours for beginners and professionals in different areas. There are also slow and massive boat rides, high-speed inflatable boats, water scooters, parasol, and water skiing. For those who love to add a bit of adventure to their trips, this is one of the Kish tourist attractions they should check out.

All the Safari tours take place by off-road vehicles on the desert of the island. It is also possible to ride a camel there. Motorcycling, Karting, and Bungee shooting are the other attractions of this site. Again, if you would like to add some adventures to your list of Kish tourist attractions, this will be one of them.

This site has a complete collection of aquatic animals in the Persian Gulf. In addition, it is possible to go diving, boating on glass boats and taking a photo.

his park is one of the largest water parks in Iran. There are different kinds of water recreation in three categories of slow, fast, and horrible.

Sailing in the Persian Gulf begins from 9 pm to 1 am and includes dinner, live music, and stand-up comedy. Aquarium ships take passengers to visit the aquatic animals.

The Popularity of Heritage Tourism in Iran