Lar is one of the southern cities of Iran located in Fars province. It has its own charm peculiar to its character as a southern city. Lar tourist attractions bring lots of Iranians as well as international travelers to this city.

Lar is one of the southern cities of Fars Province in Iran. It is the only city without alleys in the Middle East. It has several fascinating tourist attractions. Some of them are historical attractions and some are natural.

Due to the warm and dry climate of the city, there are plenty of palm groves and water reservoirs there. Therefore, there are some local dishes that are enjoyable and suitable for the climate. The local souvenir of Larestan is Muscat Halva.

If you need to know the temperature at the time of travel, you find it here!

Lar County reaches Darab and Jahrom counties on the north, Firoozabad and Kangan counties (in Bushehr Province) on the west, and Lamerd, Gerash cities as well as Hormozgan province on the south.

The city is 806 meters above sea level. The average annual temperature is 23°C and the average annual precipitation is 203 mm. This area has a warm and dry climate. The winter is mild and the summer is very dry. Therefore, the best season to travel to this southern city is fall, late winter, and early spring.

There are different ways of traveling to Lar:

This city is located 330 km southeast of Shiraz City and 190 km northwest of Bandar Abbas. The distance between Lar and Tehran is about 1,300 km and it takes about 18 hours to travel by car. It is better to have a stopover in Abadeh City in order to reduce travel fatigue.

In terms of access to the sea, the shortest route from Lar is 160 km connecting it to Bandar-e Pol, but the distance decreases to 97 km if we consider it as a straight line.

For traveling to this city by bus, there are direct buses leaving from the cities of Shiraz, Bandar Abbas, Jahrom, and Qeshm.

The airport of this city has flights to Tehran, Shiraz, Ahvaz, Dubai, Kuwait, Doha, and Sharjah. Generally, the airline companies such as flydubai, Air Arabia, and some Iranian companies are cooperating with Larestan Airport.

According to the 2016 Iranian census, the population of Lar was 213,920 people. Local people are mainly engaged in economic activities in Qatar, Kuwait, the UAE, and Oman.

With four industrial towns and two industrial districts, this city has the highest number of industrial centers in Fars Province. The main activity of the towns is the production of food, industrial and mechanical components, and cellulosic materials.

There are also several salt, gypsum, and limestone mines in and around this city. Larestan Cement Factory is one of the major projects of the province.

During the Sassanid period, Lar had an important situation because of the construction of fire temples in the city. It was the center of mintage since the late 14th century. Coin of Lar (Larbon) has been common in the Persian Gulf and Indian coasts.

This area has been an important and widespread province in southern Fars during the Safavid era. The city dates back to the period of Gorgin, an Iranian hero. The ancient roads that went from Firoozabad and Estakhr through Khanj, Marvdasht, Fal, and Asir, to Siraf Ancient Port and the south, and the remnants on this way, are indications of the pre-Islam era’s culture and civilization in the region.

Today, Lar consists of two nearby parts. Built after the earthquake of 1960, the new section is linked to the old town via highway. It is located six kilometers away from the old town.

The other tourist attractions of Lar are natural ones. Salt domes and protected areas are some of them. You can find more details about them in this post.

Lar tourist attractions are of two types: historical and natural. Please find them below here:

Lar Historical Attractions inside the City

Here is the list of Lar historical attractions inside the city: 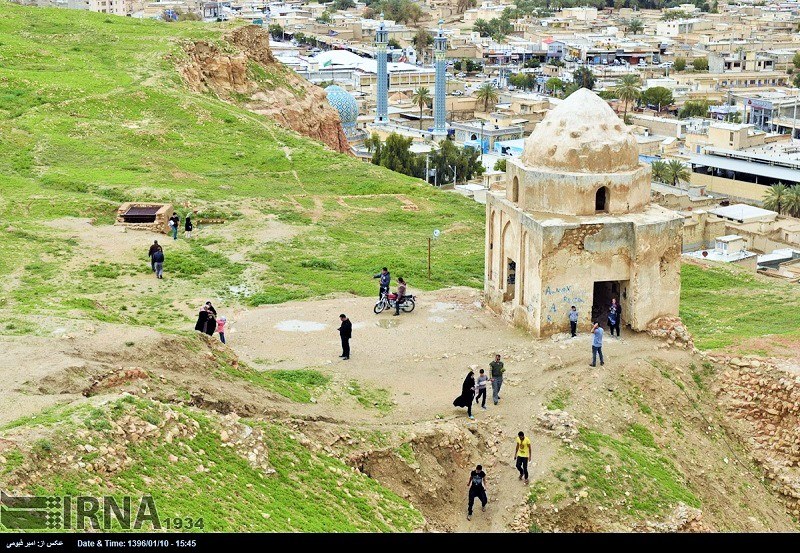 Lar tourist attractions should start with this as you can see it from the city. This is one of the national heritage sites in Iran, a memorial from pre-Islam Iran. The monument located on a high mound in the north of Lar is visible from all the entrance and exit points of the city.

Tomb of Nader Shah’s Mother (Naneh Nader Tower)
The monument is located near Ejdeha Peykar Castle. Based on the stone used in the building, it dates back to the Timurid and Safavid periods. The name of this monument derives from local history.

New and Golshan Caravansaries
In the old towns, villages, and roads of Larestan, there are the remnants of caravansaries of various periods, especially the Safavid era. The most important caravanserais are New, Golshan, and Motamed Caravanserais located in the historic complex of Lar and in the old neighborhoods of the city. 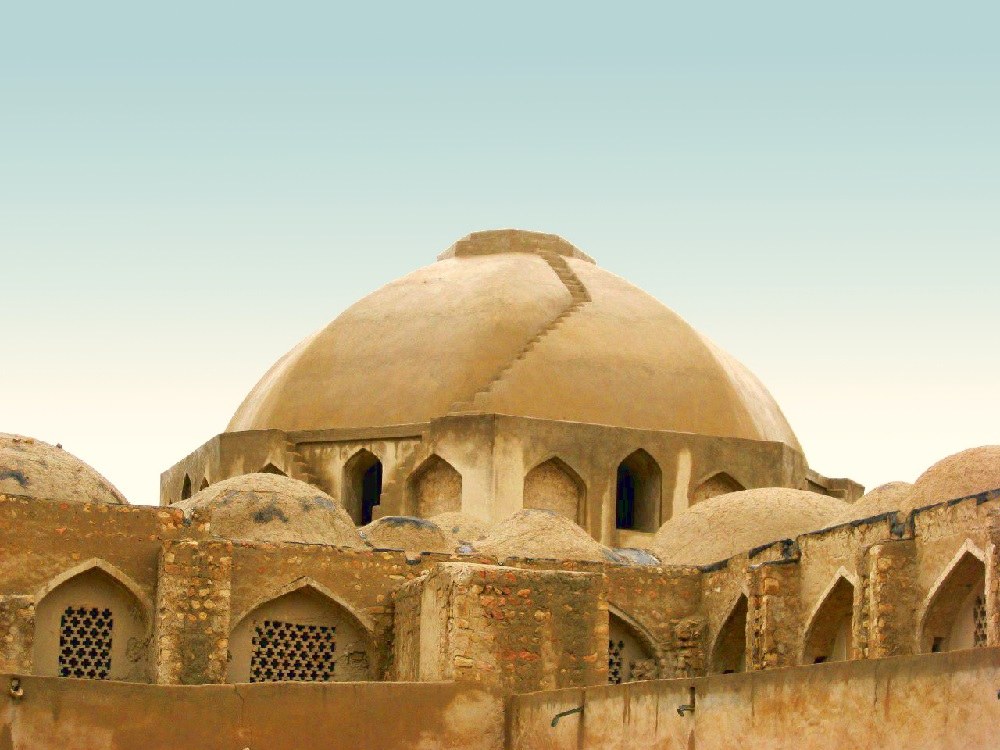 One of the favorite places that many people visit in this city is its bazaar. Lar tourist attractions are varied, but this one is architecturally very significant as well.

This monument is a valuable and full-of-diversity complex of ancient Iranian architecture dating back to 1300 years ago. One can see the manifestation of architectural style from the pre-Safavid to the Qajar period in this historical complex. The most interesting part of the Qeysarieh Bazaar of Larestan is its Chaharsuq design.

One of Lar tourist attractions is its water reservoirs. Due to the warm weather in the summer as well as the lack of water in Larestan County, since a long time ago, the people of this area have constructed water reservoirs, Mouth of Lion (a sort of water reservoir that looks like a lion’s mouth) and Qanats. So, they fought against the hot weather and, in addition, created beautiful monuments.

Some characteristics of the traditional architecture of Lar City are found in more than 1500 water reservoirs in different shapes and sizes, as well as the unique canals for transferring the rainwater into the reservoirs. 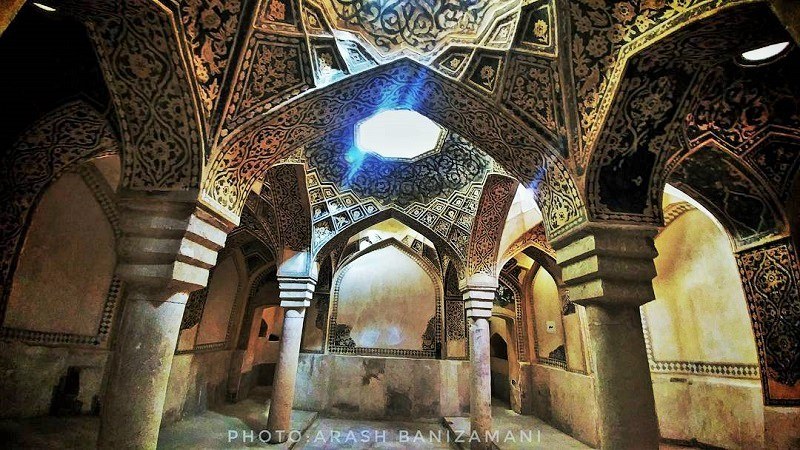 Dating back to the Afsharid era, Neshat Garden is located in the old town of Lar. It has an area of one hectare. The garden had been the headquarters of Lar since the Safavid era.

Museums are great places that could help you wrap up all the points you’ve learned about Lar tourist attractions in your excursions.

Pir-e Sorkh Tomb
The tomb is located southwest of the old town of Lar. It belongs to the Safavid period. There are paintings on some of the walls of this monument, as well as many old stone works.

Here is a list of Lar historical attractions outside the city:

Azar Farnabagh-e Karyan Fire Temple
With an approximate height of 20 meters, this monument is on the way to Karyan, from Heram Village, in Juyom District of Larestan. It is located 42 km southwest of Juyom, halfway to Bandar-e Siraf and Darabgerd City.

Farnbagh or Karyan Fire Temple of Larestan was one of the largest and major fire temples in Iran during the Sassanid era. An important fire of triad sacred fires of Zoroastrianism was burning here. For Zoroastrians, this is a must-visit attraction. 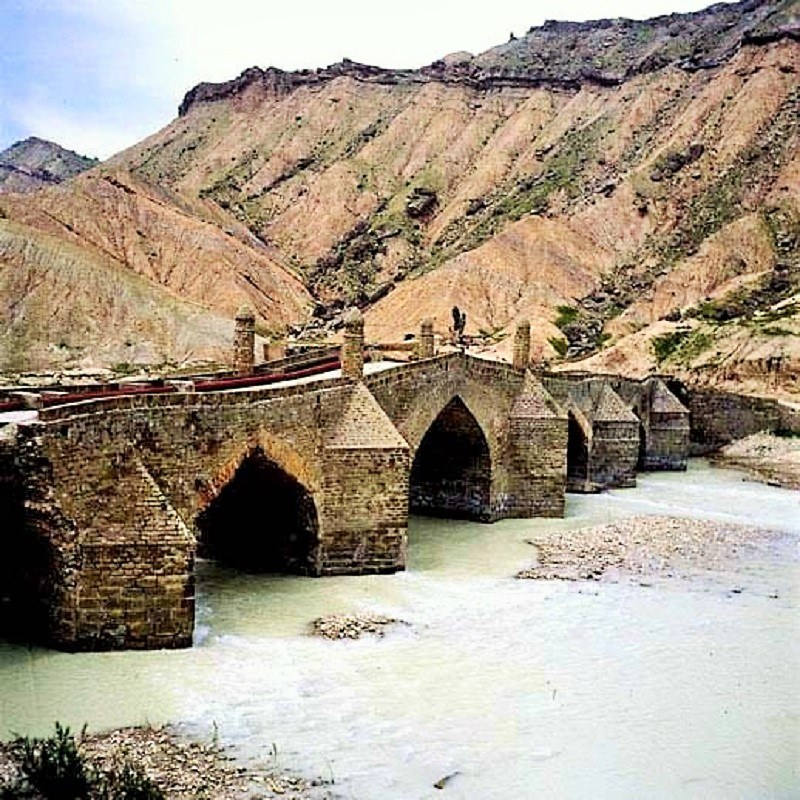 A spectacular sight that is in relatively good condition is Shah Abbasy bridge. Some Lar tourist attractions are outside the city, but worth a drive to visit.

The bridge dates back to the period of Shah Abbas I. It is about 20 meters long and 5 meters high. This bridge is located on the Shur River. The remnants of the bridge were completely destroyed during the construction of the new concrete bridge.

Here are some of the most outstanding Lar tourist attractions in its natural landscape:

Salt Domes of Larestan
Salt deposits have created salt domes reaching the earth’s surface for millions of years and are constantly growing. These domes contain mineral deposits of sulfur, uranium, iron, sulfate, and granite. Here are the most famous domes:

The above salt domes are some of Lar tourist attractions that many love to visit because of their beauty. The area is one of Lar tourist attractions that bring lots of visitors to his area. It is located between Fars and Hormozgan provinces. It has an area of 201,625 hectares.

Due to the special conditions of the habitat, this region is one of the remarkable areas of excursion and research in terms of plant and animal species, especially the mouflon, of tropical areas of Larestan.

The Popularity of Heritage Tourism in Iran

7 Reasons Why Iranian Tour Guides Facilitate your Tours of Iran