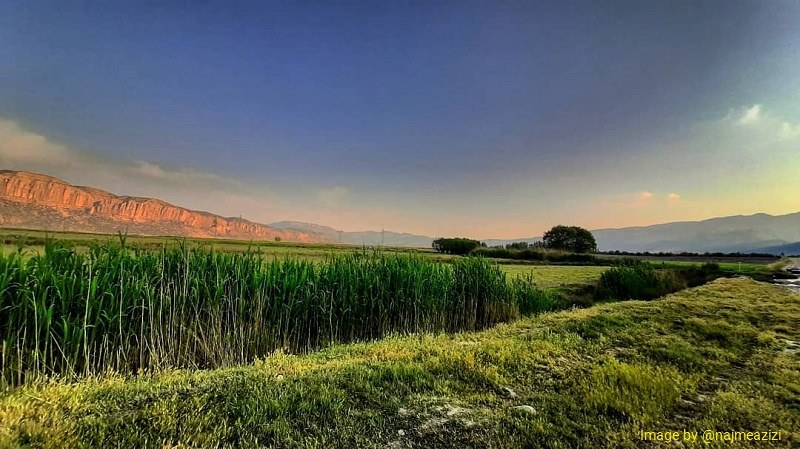 Arjan Biosphere Reserve and Parishan Wetland are located in the southern part of the Zagros Mountains, sixty kilometers west of Shiraz. There is also an important connection road from Fars to Khuzestan and Bushehr provinces passing by this area. Dasht-e Arjan Village is located in the north of the area and Kazeroon City is 20 kilometers to the west of this area.

Since 1978, the authorities have paid special attention to these forests to make sure they could prevent any kind of agriculture, animal husbandry, and human activities.

Arjan Plain has an area of approximately 90 km2 and a height of 1,990 meters above sea level. There are high lands surrounding this plain. On the other hand, surface water systems, as well as surface and subsurface water recharge, are closed in the area. However, sometimes water is accumulated as much as one-meter depth for a temporary time, but due to the evaporation and fracture in hard surfaces, it escapes rapidly. As a result, there is no water left in this plain. 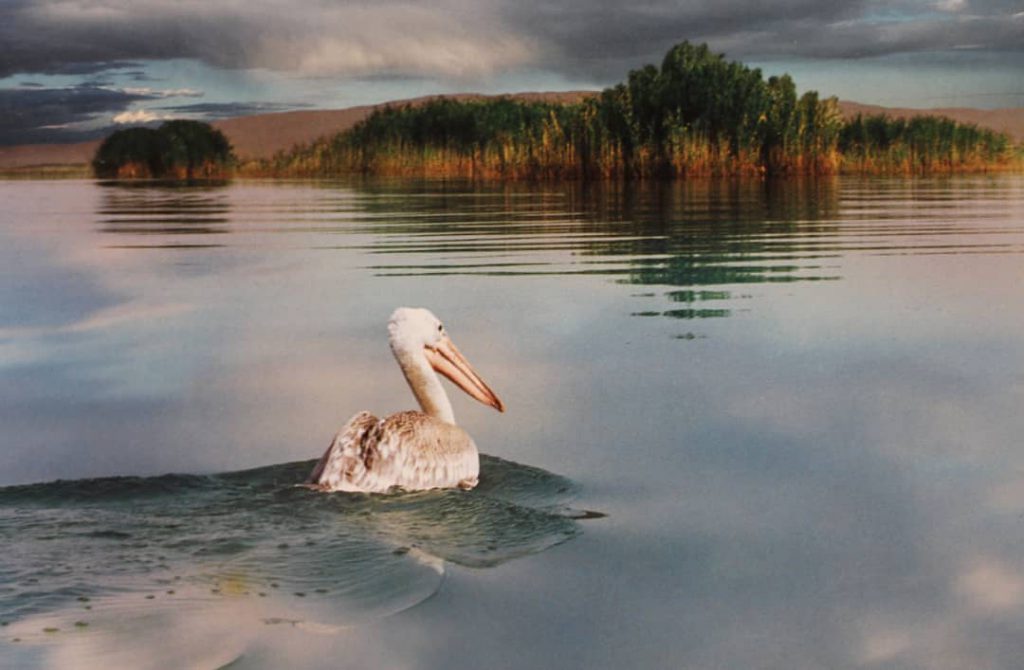 Parishan International Wetland is a permanent freshwater wetland with a height of 820 meters above international waters. Parishan Wetland has an area of 4,700 hectares and a basin of 266 km2. This wetland is located 12 kilometers southeast of Kazeroon City, on the edge of the Zagros Mountains. The average depth of the wetland is 1.5 meters and the deepest part is 5 meters.

Most of the inhabitants are farmers and gardeners, and the nomads are involved in animal husbandry. When the wetland is full of water, the local inhabitants of the outskirts go fishing there too.

The area was selected as an international park in 1972 with an area of 191,000 hectares. In 1982, with a reduction of 56,713 hectares, UNESCO designated the park as the protected area of Arjan and Parishan. It was shortly afterward that the United Nations introduced the area as the Arjan and Parishan Biosphere Reserve.

Chestnut trees are the dominant species in the highlands of Miankotal and Barm Plain. These trees show a very spectacular view of the Zagros forests in the growing season. Famour Narcissus Fields is a plain in the southeast of the wetland bursting into narcissus flowers in fall and winter.

The Arjan Plain waterfalls, with a height of over fifty meters, are located on the east of the area and the slopes of Bil Mountain hence visible from very long distances. 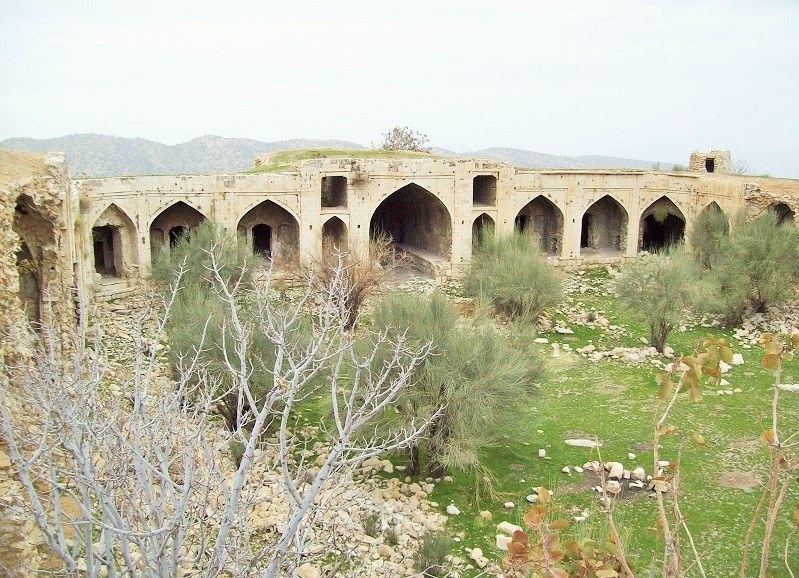 There is an old caravansary in the area, located on Miankotal Road, dating back to the Qajar period. Other attractions of this wetland are:

The old road from Shiraz to Bushehr, also known as Kotal Pirzan, is another attraction of the area, which is still usable. Road construction engineers have beautifully designed some parts of the road overlooking the deep valleys.

At the highest altitudes of the Arjan and Parishan Protected Areas (Chah Barfi Summit with an altitude of 2,900 meters above sea level), the cypress trees have grown sporadically. Just below the summit, the oak forest covers most of the area.

The lowest part of the area is the plain around the Parishan wetland. They are only 800 meters above sea level. The dominant plant species of that area used to be jujube trees, but today, except in limited areas, there is no trace of them.

As mentioned above, the area has two completely different climates and the altitudes vary from 800 meters to 2,900 meters. This has led to the creation of diverse living conditions and habitats throughout the region. It includes the heights of Mankotal and the Arjan Biosphere Reserve and Parish wetlands as well as the Zagros forests in the central and southern parts.

These two wetlands in the area encompass a wide range of aquatic animals and different species. Recent studies in Fars Province revealed the existence of 2,253 plant species and 398 animal species (including 60 mammal species, 43 fish species, 41 reptile species, and 4 amphibian species).

In 1981, the authorities enclosed about 105 hectares of Arjan and Parishan Protected Areas for restoring and reproducing Persian fallow deer. In the fall of 1993, they transferred 17 Persian fallow deer from the wildlife refuge of Naz Plain of Sari to Miankotal Area in Arjan Plain in Fars Province and released them in the area.

During this period, with the full protection and care of the park rangers, Iran achieved the goals of the project and, according to the 2010 census, the number of deer has increased to 75.

However, today, due to the mismatch between the number of deers and the size of the area enclosed in Miankotal, the oldness of some deers, etc, the population of this species has declined greatly. As a result, the authorities undertook the development of the Miankotal site to provide suitable living space.

In doing so, they expanded the Miankotal site up to 300 hectares and made the Arsanjan site operational with an area of 200 hectares in 2011. Fortunately, this activity led to the revival of this valuable species of deer.

The area comprises 29 villages, only 17 of which are concentrated around Parishan Wetland and the rest are scattered throughout the biosphere reserve. In addition, large numbers of nomads settle around the region during the summer. In total, Arjan Biosphere Reserve and Parishan Wetland accommodate approximately 14,000 people and more than 4,500 nomads.

The rural population residing in this area consists mainly of three tribes: Fars, Arabs, and Turks. Agriculture is the main economic activity in the region. People living near wetlands make a living by traditional fishing. People living in the eastern part of the wetlands are farming and producing dairy products.

In the spring of 2013, the adequate seasonal rainfall resulted in the partial filling of Parishan Wetland with water, by approximately 10% of its capacity.

Other important happenings in the area are:

Conflicts and Threats against Arjan Biosphere Reserve and Parishan Wetland

In Iran, despite detailed zoning plans, there is a downward trend in some biosphere reserves of these areas. Local people’s pattern of sustainable exploitation and the preservation of biodiversity has become different at the present moment. Overgrazing habitat, illegal hunting, etc. have altered the conditions of some areas.

The overall pattern of a biosphere reserve is a protected central core surrounded by a buffer zone. The buffer zone is an area where researchers monitor and manage human activities carefully, and carry out research.

The fact is that populated areas will continue to grow dramatically in the coming decades. As a result, resources such as firewood, medicinal plants, and hunting meat will become increasingly difficult to find.

But protected area managers in developing countries should anticipate that the demand for the use of scarce natural habitat will continue to grow. Conflicts will inevitably increase as agricultural density and habitat increase near the protected areas.

Arjan Biosphere Reserve and Parishan Wetland are exposed to the following threats: