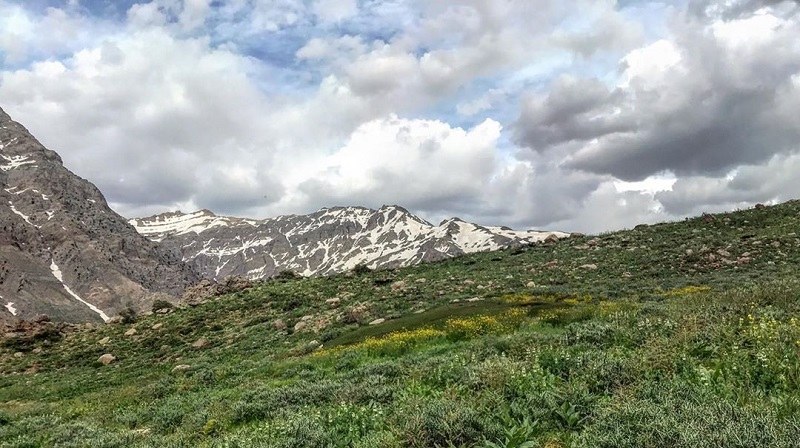 Dena Biosphere Reserve is one of the major natural areas in Iran. This biosphere reserve is of great importance in terms of landscape and biodiversity. The best time to visit Dena area is in spring and early autumn.

The concept of the biosphere has an important purpose in its sense that is creating a balanced relationship between human beings and the environment. For UNESCO, This can be achieved by promoting sustainable development, which is ecologically flawless and meets human needs.

Dena Biosphere Reserve is cold, due to its location on Dena Mount, and is covered by snow during winter and sometimes during autumn. Authorities do not issue any hunting license in this area. Even you should receive official permission from official Iranian authorities for entering the National Park and Biosphere Reserve area.

UNESCO inscribed Dena Region in 2010 as the 10th Biosphere Reserve of Iran and the world’s 550th Biosphere Reserve. Before the inscription of Dena, located in Kohgiluyeh and Boyer Ahmad, UNESCO had inscribed 9 other Iranian biosphere reserves of Urmia National Parks, Golestan, Kavir, Arasbaran in East Azerbaijan, Turan in Fars province, Geno and Hara in Hormozgan, Arjan and Parishan in Fars Province and Wildlife Refuge in Mazandaran Province around 34 years ago.

You can find the complete list of UNESCO Biosphere Reserves on Iran here!

This area is as vast as 25,839 hectares. It is also a completely mountainous area. The height difference between the highest and lowest points of the area is over 3,000 meters.

Dena has high peaks, massive wall-like cliffs, and deep valleys. In the east of Dena, there is the historic Bijan Pass. In addition, Marbar and Bashar rivers surround their northern, western, and southern borders. Marbar River, flows from east to west at the north of Dena, passes through several villages and Khersan Gorge, and changes name into Khersan River and join Bashar River after crossing the narrow gorges. The junction of Khersan and Bashar rivers is a forest area with a stunning landscape.

Dena Biosphere Reserve has a minimum temperature of 27°C and a maximum of 49°C. The average relative humidity of the area is 4.46% and the annual average precipitation is 823 mm.

The height of this biosphere reserve is 1300 meters above sea level. This is the lowest point in the region.

There are numerous valleys in the slopes of Dena Biosphere Reserve, full of small and large springs. Many of these springs originate from beneath the snow, form foamy rivers flowing down the steep slopes of Dena Mountains.

There are also many waterfalls in the area that fall from high cliffs, join each other, and form the cold, sweet and clear rivers of Bashar and Khersan. Dena Biosphere Reserve is an area with a great variety of fauna and flora.

Dena climate is among the cold humid and cold semi-humid regions. Dena National Park and Biosphere Reserve, extended as long as 80 km, is the longest mountain range in the Zagros. The world’s well-known climbers call it the Iranian Alps. Dena has 49 peaks with a height of more than 4,000 meters.

Here are the structural features of this area bases on their outstanding elements:

Socio-economic Characteristics of the Area

According to the 2016 Iranian Census of Population and Housing, the population of Dena Region is 27,197 people. The population of the northern part was 4,070 and the southern part 23,127. The major population centers located on the periphery of Dena Biosphere Reserve include Si Sakht City, Pataveh, Kara villages, Meymand Village, Sivar Village, and Padna villages.

Most of the inhabitants of Dena Biosphere Reserve are active in farming, livestock, and dairy processing in the traditional way, beekeeping in a native way, and collecting medicinal plants.

The nomads still migrate in Dena Region and protected area, though with a very small population. In addition, the continuation of migration means the continuation of thousands of years of history, culture, and lifestyle. This phenomenon creates an atmosphere of historical and cultural value and importance in the area. The nomads’ pastoral and herding lifestyle is one of the main coordinates of the social structure of the inhabitants of this area.

Bioindicators are one of the major conservation factors in any area. The rare and endangered animals in the area, as well as the indicator animals, are the bioindicators of an area. In fact, these criteria represent the unique characteristics of a region.

In addition to indicating high biodiversity in the area, valuable species and indices indicate that the protected area is pristine and untouched and has biological value. They also enhance the ecological value of the area. Dena Biosphere Reserve has valuable bioindicators in the two categories of fauna and flora.

Flora of the Area 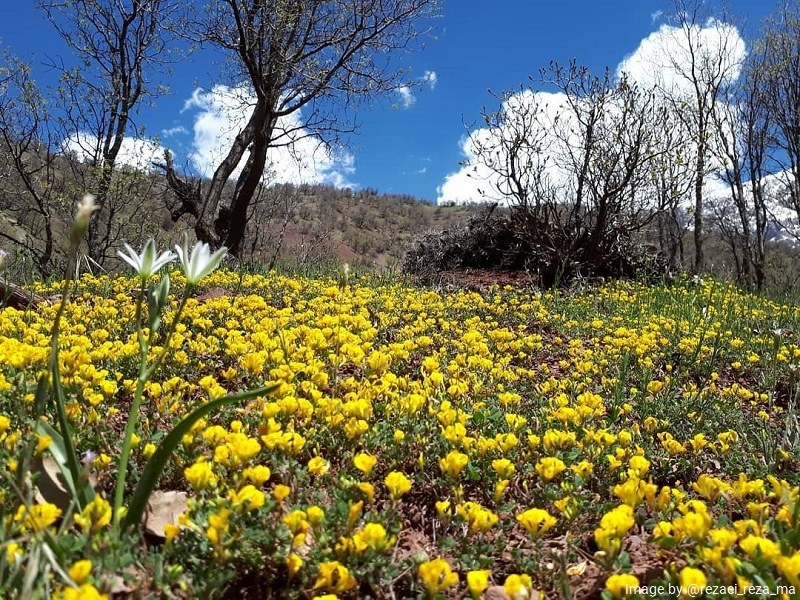 Dena Biosphere Reserve is very rich in plant species diversity. This area is a valuable genetic capital due to its collection of the forest, grassland, medicinal, edible and decorative trees, and plants. At 2,500 meters high, the chestnut forests cover the southern slopes of Dena, unique in the desert climate of Iran.

Among the chestnut trees, we can find different forest species. Types of forest tree species such as Persian turpentine, Acer monspessulanum, Prunus scoparia, Hura crepitans, and different kinds of almond are among chestnut trees. However, Quercus Branti is the dominant species of chestnut there. The chestnut forest cannot grow above the height of 2500 meters. Instead, there grows Prunus scoparia, Hura crepitans, Astragalus, and cypress trees.

In addition, some of the tulip flowers growing in Dena are the special flowers of this area, and are we cannot see them elsewhere. One of the most beautiful flowers is Tulipa biebersteiniana.

There are about 860 species belonging to 376 genera from 73 plant families as flora in Dena Biosphere Reserve, approximately 20% of which are endemic plants. The 128 medicinal species, 110 wild biodiversity, 84 pigmented species, and 61 wild edible species indicate the medicinal, edible, pasture, and conservation value of Dena biosphere reserve plants.

Fauna of the Area 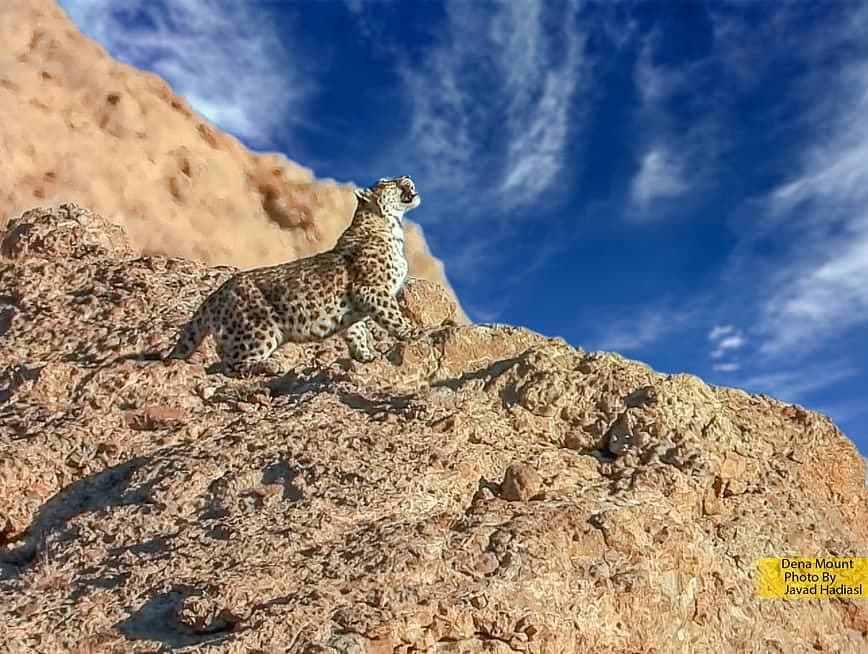 The protection of Dena has increased the diversity of animal species in the area so that there is no need to use binoculars to see bears, goats, and Persian ibex in Dena Mountains.

The researchers have reported the existence of 25 species of mammals belonging to 7 orders, 85 bird species, 25 reptile species, two amphibian species, eight fish species, and more than 30 species of butterfly in Dena Biosphere Reserve.

Among the Feliformia (cat-like carnivorans) in the Dena area, there are valuable species of Persian leopard, wildcat, Jungle cat and Caracal who are endangered animals and their populations are in decline in most places. The Mustelidae (weasels family) also has three different species in the area that has more sensitive protection condition than the other two species. Wolves are also an endangered animal living in Dena Biosphere Reserve.

Dena’s important wildlife habitats are approximately 29 zones according to which animal species are categorized. Here are some of these areas:

In these habitats, tourists, researchers, and nature lovers can easily see the Zagros wildlife scene by naked and armed eyes. In addition, they can study comprehensive wildlife ecology in this area.

There has been purposeful protection of this vital ecosystem over the past 17 years. As a result, we can see the growth and proliferation of important species such as goats, brown bears, wild pigs, leopards, etc. The animals such as bearded vulture, Golden Eagle, and Leopard at the top of the food pyramid indicate the high quality of the habitat.

In addition, the number of mammal species in the National Park and Dena Protected Area has reached 26 species, including the long-eared bat, beaver, and Persian fallow deer.

In the Dena area, researchers have also identified 39 species of reptiles and crustaceans the most prominent of which are turtles, coin Snake, Braid Snake (Jan’s Cliff Racer), and diadem snake (the royal snake).

Regardless of the diversity of fauna and flora species, due to climatic reasons and geological phenomena, this area is also of great interest to biologists and geologists in terms of education and research. Dena Biosphere Reserve is also notable for investment in mountain sports and leisure.

Here’s a list of threats in the Dena Biosphere Reserve:

• Overhunting and fishing
• Increase of the settlement in the bush and marginal area of the region
• Construction of numerous roads and gas transmission lines through the forest
• Change of forest and rangeland land use to agricultural, urban and rural areas
• Unnecessary cutting of trees for fuel consumption
• Overgrazing of livestock and over-harvest of medicinal and edible plants
• Entomology and phytopathology
• Drainage of wastewater into rivers
• Excessive use of organochlorine pesticides and heavy metals in farms