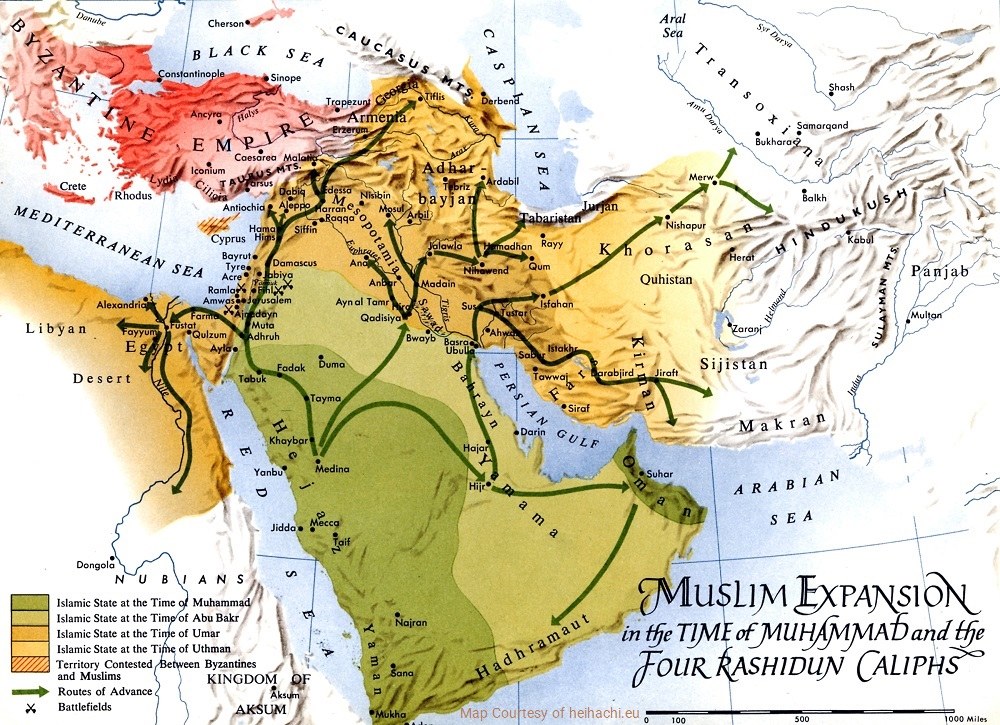 Iranians have witnessed the destructive Arabs’ invasion of Iran after the defeat of the Sassanians’ army. The lack of discipline, order, unity, and integration within the administration body of Sassanians’ government paved the way for the Arabs’ conquest of Iran with a deadly blow.

This happened at the time of Omar, the 2nd caliph of Muslims. Having seen the upper-class corruption, deterioration of their beliefs structure, code of ethics, and financial matters, lower-class Iranians did not see any reason to defend the existing conditions. Yet, Arabs could not seize the entire territories of Iran quickly although they launched their revengeful conquest on Iran. It was revengeful as Iranians kings had suppressed their uprisings and rejected their invitation to a new faith.

After the Arabs’ invasion of Iran, Zoroastrians, in their homeland, Iran, had to pay taxes for not converting to Arabs’ religion. They also had to promise not to interfere with the Arab occupiers’ plans. The upper-class Iranians showed more readiness to convert to the new religion.

Those who willingly converted to Islam were exempt from tax payments but were not considered equal to Arab Muslims. Instead, such Iranian Muslims found themselves treated as freed slaves. They couldn’t ride horses and hold weapons when they fought in the battlefields for the cause of the new religion. They were not allowed to marry Arab women either.

Iranians, who had got accustomed to a theocratic government for almost 400 years under Zoroastrians, accepted the new religion gradually and got used to the new government. Those Iranians, who did not want to convert to Islam and pay taxes to the foreign aggressors had to flee from their homelands. They left Iran for Gujarat in India and formed a community of Zoroastrians there called “Indian Parsees”.

Iran after the Arabs’ Invasion of Iran

As several Iranians had reacted to the Arabs’ maltreatment of their country and fellow citizens, the Islamic army was suppressing them by sending more and more troops. This started from the time of Omar and continued until Muawiyah sent some troops from Damascus to Iran for the same purpose.

Arab immigrants continually arrived in Semnan, Khorasan, and Sistan areas of Iran to settle. Such migrations occurred for around one century in the other parts of Iran too. The migrations were so unpleasant that sometimes Iranians left their towns and cities because of their presence. Arabs kept their primitive lifestyles in Iran. In other words, they made a living as herdsmen, road keepers, and bandits. Rarely, they farmed or worked on underground water supplement systems called Qanats.

Uprisings after Arabs’ Invasion of Iran

The inhabitants of today’s Iraqi areas set uprisings against them, the most famous of which was the uprising of the people of Kufah led by Imam Hossein, son of Imam Ali, and the third Imam of Shiites. As a result, Imam Hossein and all his companions were killed. Because of the influence of Arab nobles in most of the decision makings of Arab opposition movements against Umayyad rulers of Damascus, they could not get anywhere.

The last caliphs of Damascus, who were interested in pleasure, music, and hunting more than politics, caused a great deal of dissatisfaction. Devotion to the cause of religion did not matter anymore to those rulers.

On the other hand, in Iran, several nationalistic Iranian movements emerged against the Arabs’ invasion of Iran. Here are some of them:

In Khorasan province of Iran, newly converted Iranian Muslims joined a movement against Umayyad rulers of Damascus led by an Iranian general called Abu Moslem. Umayyads summoned several military expeditions to different parts of Iran to destroy books and kill Iranian intellectuals. Their main concern was not spreading the seed of Islam, because in that case, newly converted Muslims were not supposed to pay taxes anymore. Such taxes formed the assets of caliphs, not the budget of Muslims.

Abu Moslem let all Iranian Muslims, Zoroastrians, Mazdakists, and anti-Umayyad Arabs in his movement. Abu Moslem’s movement was in support of Abbasid caliphs against Umayyads. (Abbasids had got their name from the prophet’s uncle, Abbas.)

Abu Moslem’s movement started from Transoxiana (beyond the Oxus River) and went as far as Syria. The army of Abu Moslem conquered Damascus and other cities of Syria and poured their outrage upon Umayyads there. The Umayyad caliph was killed and their ruling structure was toppled down.

Abbasids used Abu Moslem for establishing their foundation of power in Kufah. Later, they played a trick on him, invited him, and promised him many privileges, but instead, they killed him. His movement was called the movement of “Syah Jamegan” (Black-Clothed People). He was a source of pride for many in his region for a long time.

Abbasids’ malignant behavior toward Abu Moslem soon triggered other armed oppositions against them. The first such major movement started by a Zoroastrian called “Sanbad” two months after the death of Abu Moslem. Most of those revolutionaries were Zoroastrians and Mazdakists. Of course, the Arabs’ invasion of Iran had also caused Khorasan’s Shiites to join it too.

Little by little, an army of 100,000 revolutionaries was formed. This was a great threat to the sovereignty of Abbasid rulers in Khorasan. The nature of the movement was against the Arabs’ invasion of Iran first but turned to be anti-religion later. Although they were defeated by the army of Abbasids between Rey and Saveh, they managed to shock the foundation of the caliph’s rule. This movement was called the movement of “Sepid Jamegan” (White-Clothed People). The movement was continued in Transoxiana later.

He was a strong revolutionary, a believer of Zoroastrianism, and a savior character as his followers called him. He started his movement from Badghis, today’s Afghanistan, Herat, and Sistan against Abbasids. The nature of his movement was anti caliph, anti Arab and even anti-Islam It is said that around 300,000 followers supported him.

After a few minor victories and making the Abbasid caliphate system worried, Ustadhsis was arrested. Some of his troops were kept as captives and all the inhabitants of his fortress, who were charged as apostates, were quickly killed. This movement had not even used the name of Abu Moslem to manage to attract more supporters.

20 years after the Arabs’ invasion of Iran and the murder of Abu Moslem, Al-Moqana recruited several people under his name. Abu Moslem was regarded as a martyr in this movement. Al-Moqana’s movement started in Khorasan and Transoxiana and attracted Zoroastrians, Mazdakists, and some dissatisfied Arabs and Turks. Wearing a green or gold mask, he led the revolution. For this reason, he was called the “Masked Prophet”.

He managed to create a lot of passion and enthusiasm in his followers by reviving some pre-Islam beliefs. This movement was also called the movement of “Sepid Jamegan” (White-Clothed People). They had several victories and defeats during their struggle against the Abbasids. They killed their opponents and Muslims. To take revenge, they destroyed the houses of Muslims as well as mosques.

The Abbasid caliph made a lot of efforts to suppress Al-Moqana’s movement and sent several people to get this accomplished. Finally, he succeeded to seize Al-Moqana’s fortress and kill or arrest many of his followers. The end of this revolutionary is very mysterious. Some believed that he had committed suicide by jumping into a blazing fire and some said he had just disappeared. His religion survived until the emergence of Mongols’ Power in Khorasan and some awaited his return.

Mazdakism continued after Arabs’ aggression as a peace-seeking among villagers. It gradually changed into a rebellion armed resistance as a result of the Arabs’ invasion of Iran. During Javidan ibn-e-Sahl, it turned into a public uprising and movement from a hidden resistance. Kurds and Lors played a major role in promoting this movement in the NE of Iran. Later, this movement was handed over to Babak. Babak’s revolution against the Arab invaders had an anti caliph anti-Arab nature.

The revolutionaries joining this movement were from among the oppressed ones, freed prisoners, homeless people, and bandits. They plundered and killed their opponents on the way to Baz Fortress, where Babak was living and leading the movement. Babak’s revolution soon became a deadly nightmare for the Abbasid caliphate rulers. Many were sent on missions to kill Babak, but they were unsuccessful in their efforts.

Finally, after 24 years, a newly converted Iranian Muslim called Afshin was assigned the mission of taking Babak out of his fortress. He was equipped by the caliph with a large army and weapons. All his efforts were in vain in breaking into the fortress. So, he began to exchange messages with Babak and promised to help him preserve and disseminate the ancient beliefs.

He managed to get Babak out of the fortress. Then, He arrested Babak and sent him to Samarra, near Baghdad. He was very unfairly humiliated and killed after mutilation. Babak’s followers were called “Sorkh Alaman” (Red-Flagged People) or “Sorkh Jamegan” (Red-Clothed People).

Mazyar was a prince at the south of the Caspian Sea, Tabarestan, who went rebellious against the caliphate system. The caliphate system charged him with apostasy because he was a Zoroastrian. His followers were mainly from the villages and were against Arabs and Feudals. This movement became a kind of Mazdaists’ movement and his followers were called “Sorkh Jamegan” (Red-Clothed People). The nature of the movement against the Arabs’ invasion of Iran was primarily anti Arab, anti caliph, and anti-Islam.

The life of Muslims and later mosques were endangered dramatically. As a result of the caliph’s military attacks to the region, Mazyar was arrested and sent to Samarra, near Baghdad. He was humiliated, charged with apostasy, and executed there.

It is noteworthy that Afshin was first appreciated because of his help in arresting Babak, but he was finally accused of stimulating Mazyar against the caliphate system. Therefore, he was also sent to Samarra to be tried. There Arabs realized that Afshin had planned to assassinate the caliph in Baghdad, had not believed in Islam, and had had animosity feelings toward Arabs. Hence, he was executed as an apostate too.

The Result of Iranians’ Movements against Arab Aggressors

In addition to the previous uprisings against the caliphate system ruling from Baghdad, the suppression of Babak, Mazyar, and Afshin added to the power of caliphs. These three revolutionaries, who attributed themselves to the Sassanians and considered themselves the successors of them, resisted more than others against Arabs. Yet, all these resistance movements set anti Arab sentiments in people’s hearts all across the disintegrating empire of the Sassanians. They also caused Tabarestan to turn into an anti-Abbasid and relatively anti-Arab movement center.

Although none of these movements and uprisings against Arabs’ invasion of Iran, occurring for almost 200 years, could end in deposing caliphs, they deprived Baghdad of having direct supervision and sovereignty over Iran.