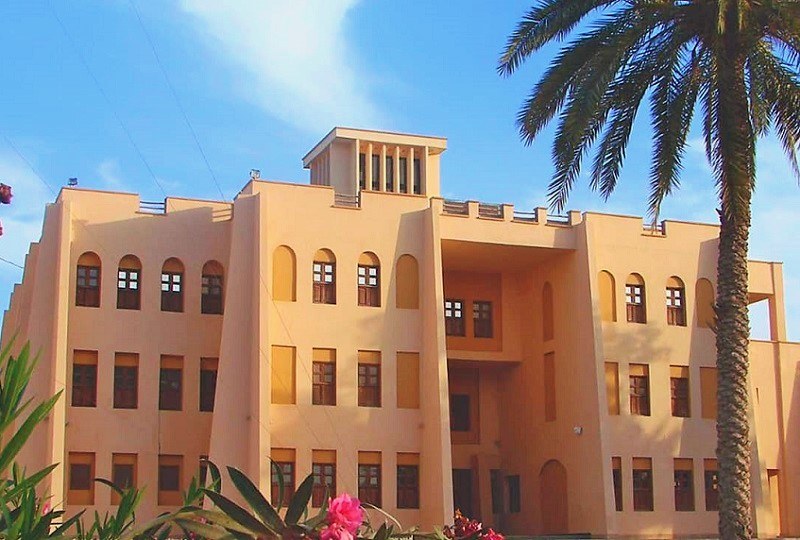 Bandar Abbas is the largest port in Iran with several tourist attractions. It is a strategic and commercial center in the Persian Gulf and the Gulf of Oman. Anthropology Museum of the Persian Gulf, Indians Temple, Baran Ponds Complex, Latidan Bridge, Genow Mountain, Siahu Village, Genow Hot Spring, and Khargo Hot Spring are among the historical and natural tourism sites of Bandar Abbas.

Among the activity of local people, we can mention Moshta Fishing that is a traditional and popular fishing activity in the city.

Shahid Rajaee and Bahonar ports in this port play important roles in the transit of large volumes of goods in the country. The closest city to Bandar Abbas is Qeshm Island. It has also a variety of traditional cuisine, unique in its kind.

This city is located in the south of Hormozgan Province. The city reaches the heights and mountains on the north and the sea on the south. Bandar Abbas is located in the south of Hajiabad County, west of Minab and Rudan counties, east of Bandar Lengeh County and north of the Persian Gulf and Qeshm Island. The area od this city is 45 square kilometers. The closest city to Bandar Abbas is Qeshm, located 28 kilometers away from this city.

The weather in this city is warm and humid. In general, in this port, from mid-November to mid-April, the climate is pleasant. In May and June, the weather is dry and from July to October, the weather is humid. The average temperature in Bandar Abbas is 27ᵒC. Its average annual precipitation is about 200 mm. The height of the city from the sea level is from 0.6 meters to a maximum of 5 meters.

Here are the different ways of traveling to Bandar Abbas:

Bandar Abbas Passenger Terminal is located in Nakhl-e Nakhoda Neighborhood. Considering the importance of this port, there are buses in different province centers leaving to Bandar Abbas.

Traveling from Tehran to Bandar Abbas by train takes 22 hours. This is one of the cheapest ways to travel to this city. Bandar Abbas has two daily passenger trains to Tehran, where passengers can take the trains in the cities located between Bandar Abbas and Tehran, it means Mohammadiyeh, Kashan, Badrud, Zavareh, Naein, Ardakan, Meybod, Yazd, Bafq, Ahmadabad, Sirjan, Tezerj, and Fin cities.

Bandar Abbas International Airport is 8.5 km away from the city center. There are daily and weekly flights to Bandar Abbas from Abadan, Ahvaz, Yazd, Dubai, Gorgan, Isfahan, Kish and Tehran. The flight from Tehran to Bandar Abbas takes about 1 hour 30 minutes to 2 hours.

By taking passenger ships from Bandar Abbas, you can travel to Kish, Qeshm, Lavan, Lengeh, Assalouyeh, Bushehr, the UAE, and Kuwait.

Population and Economy of Bandar Abbas

According to the 2016 Iranian census, the population of this port was 680,366 people. The main occupation of local people is the jobs related to the sea and the delivery and receipt of goods at Bahonar and Rajaee wharves.

As Bandar Abbas is the largest port in Iran, it is the highlighted point of the country in terms of transiting goods as well as hosting the large and multiple industrial factories. Bandar Abbas is a special economic zone for mines, metals, shipments, export, and import of goods.

This port has been one of the major cities in the history of Iran with several ups and downs. As it is located near the Persian Gulf, merchants have always passed through the city and that is why Bandar Abbas has had a reputation throughout history.

According to Herodotus, a Greek historian (485-420 BC), during the reign of Darius the Great, a Greek commander traveled under the command of Darius the Great from a port in Hormozgan and the northern Strait of Hormuz with a ship to explore the Indian Ocean and the Red Sea and to establish the maritime connections with major ports of that era, such as China, India, and Libya.

During the Achaemenid period, Darius the Great ordered one of his commanders to depart from Bandar Abbas by a ship to the Indian Ocean and the Red Sea to conquer it.

At the end of the Achaemenid Period and during the invasion of Alexander, Bandar Abbas area was on the way to current Bandar Abbas and Minab cities and it was known as Hormirzad.

In the 16th century, the Portugueses chose this port to load their goods. The geographical location of the port had made the commercial voyage of ships to Bandar Abbas easier than to Hormuz Island. This led the city to change from a small and remote city to the major port of Iran.

Unfortunately, the Portugueses exploited the position of the port and garrisoned it, but Shah Abbas I expelled them from the port. Since then, people called this port after him. It is now called Bandar Abbas which means the Port of Abbas in Persian.

Since the Safavid, Afsharid, Zandieh, and Qajar dynasties (in the 17th and 18th centuries), this port has been located on the east-west connection route.

The world developed further and other ports in the region developed dramatically. Global trade needed large ports in this part of the world. However, until the middle of the last century, Bandar Abbas was a small town having a large fence with few watchtowers and five gates surrounding it. After the 1979 revolution in Iran, this port gained more importance and went through very large development plans.

Historical Attractions within the City

There are several interesting historical attractions inside Bandar Abbas to visit: 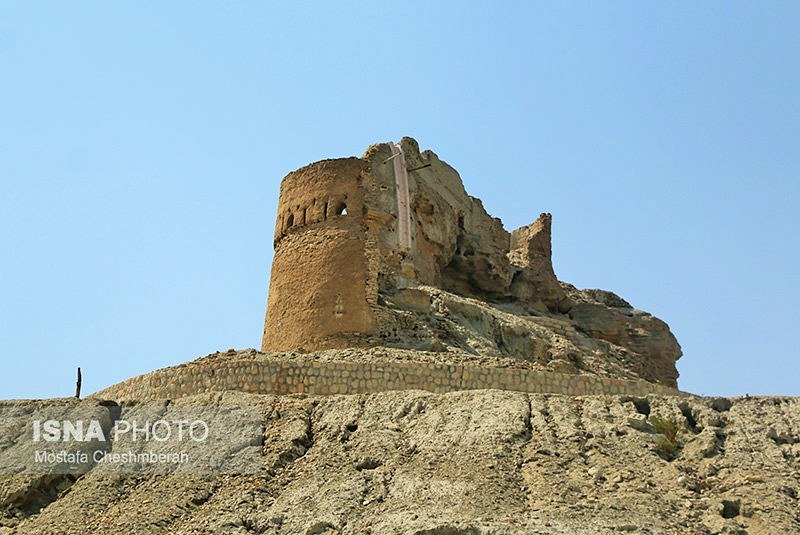 On a high mound in the Fin District of Bandar Abbas, there is a castle the age of which is estimated to be 700 years old. This estimation is according to the studies of the pieces of pottery found there. In other words, the construction of this castle dates back to Ilkhanid and Seljuk periods. The castle completely overlooks the surrounding area. One can infer that it had probably had a military function at that time. 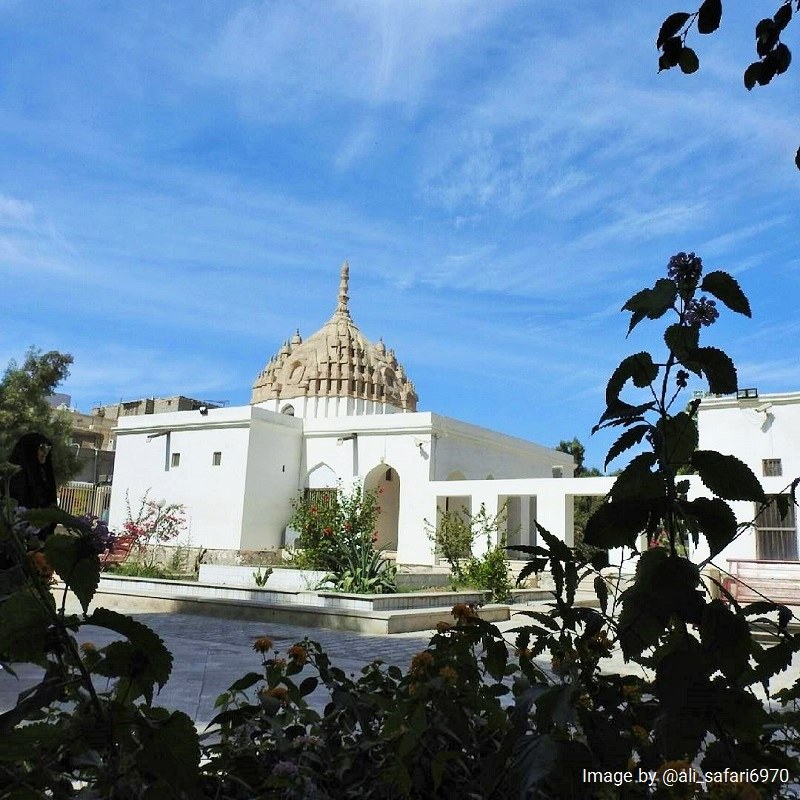 This building is also known as Guran Idol Temple. The architects constructed the temple in the last days of Nasir al-Din Shah reign and it was used during the period of Mozaffaroddin Shah, the 19th century. A rich Indian businessman built the temple to provide for the spiritual need of Indian businessmen traveling to Iran.

The architects used the Buddhist and Islamic elements in the architecture of the temple. This building is located on Imam Khomeini Blvd., facing Bandar Abbas Bazaar.

Pavilion
During the Safavid era, East India Company launched a branch of its trade organization, with the permission of Shah Abbas, in Bandar Abbas. The site of the organization was originally a house leased from the governor of the city. As the Dutch trades expanded and space was limited, East India Company decided to construct a new building, which is nowadays called Pavilion or Emarat-e Kolah Farangi in Persian. Pavilion mansion is located near the old port of Bandar Abbas and on Taleqani Blvd. 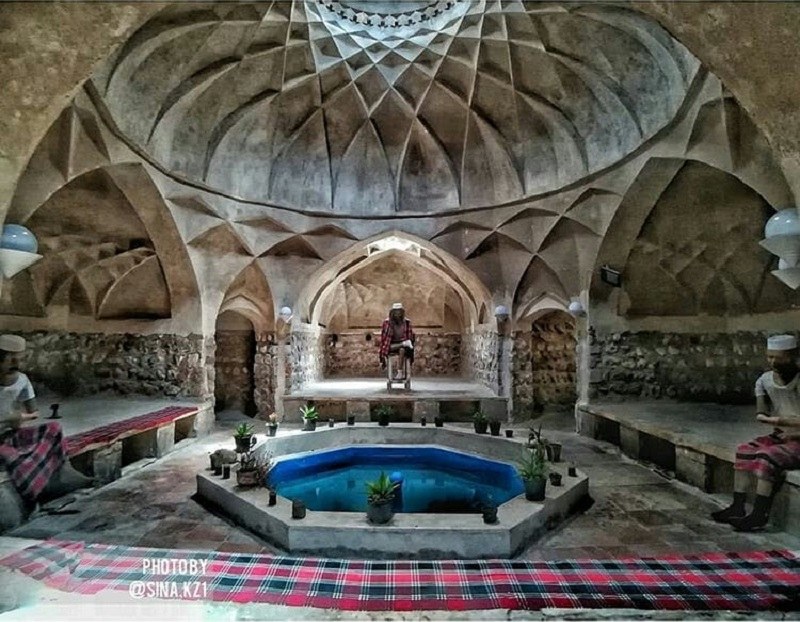 The history of this bathroom, which is the only ancient bath of Bandar Abbas, dates back to the 19th century. In the past, it was a public bathroom. Today, it has become the Museum of Anthropology. Its architecture looks like that of other baths in desert cities. Therefore, there are spaces such as Bineh (dressing room of bath), Sarbineh (dressing room of bath), Garmkhaneh (hot chamber), Khazineh (reservoir of the bath) and the small and large domes.

Suru Ancient Quarter
This ancient area is located in the western part of Bandar Abbas City. The quarter dates back to the Achaemenid period. It is also the oldest area in Bandar Abbas City. In the past, this area had large palm groves.

In archeological excavations, experts have found numerous coins belonging to different historical periods such as Sassanid, Safavid, and Qajar. The discovery of numerous coins made of copper, silver, and gold proves that in the past there were mints in the area.

Baran Ponds Complex
The complex consists of 5 ponds or water reservoirs made of rock and Sarooj mortar. These ponds have four main craters for water storage in the past and provided water for the city. Today, one of the ponds has changed to an amphitheater. Iranian National Heritage Organization registered the complex in its list.

The museum has three floors and the architects inspired by the traditional architecture of Hormozgan in the construction of this building. The museum is located on the historical site of the Baran Ponds Complex.

Here is a list of interesting places to visit outside Bandar Abbas:

AS a result of a flood in the vicinity of Kal Motali Village in 1993, water washed away the earth and took out this bridge. Some believe that Latidan is the longest historical bridge in Iran. Latidan Bridge is almost three times longer than Sio Seh Pol (33-arch bridge) in Isfahan. The construction probably dates back to Shah Abbas I era. The bridge is located 70 km from Bandar Abbas, Lar Road.

Natural Attractions near the Port

Here is the list of amazing places in nature close to Bandar Abbas:

Damash Valley
There is a river inside Damash Valley originating from Homag Mountains. The autumn, winter, and early spring are the best time to visit Damash Valley. Damash valley is located in Sikhuran Village. 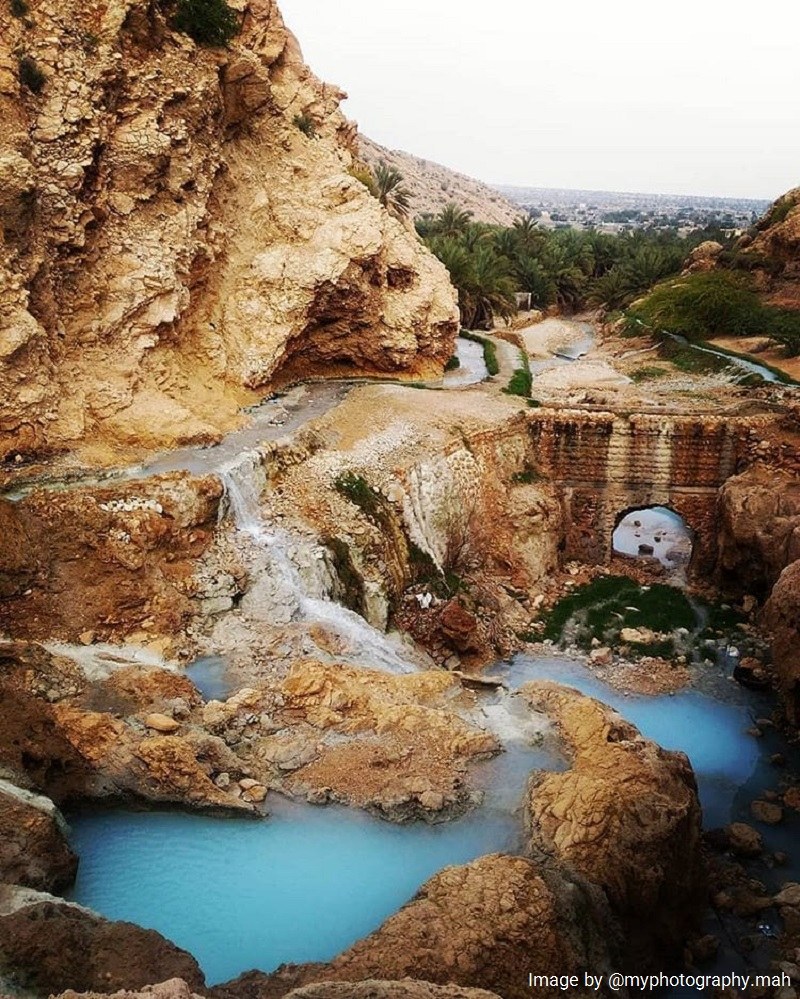 This hot spring is located about 34 km away from Bandar Abbas and there are tourist facilities near the spring. The water of this spring is sulfurous and very hot and people use that for irrigating palm trees and bathing. The palm trees and natural landscape around the spring are very beautiful. Genow hot spring is located on the road from this town to Sirjan. Genow itself is one of the major tourist attractions of Bandar Abbas because of the variety in its animal species particularly birds.

Bandar Abbas Recreational Marine Line
The first recreation and touristic marine line of Bandar Abbas were started in 2015. Locals and tourists can go there by ship from Shahid Haqani Passenger Port, passing from Golshahr Shore to Suru Coast of Bandar Abbas, every Thursday from 19 to 22 pm. Travelers can enjoy live and folklore music throughout the trip as well.

Our Lessons for Life after Covid 19 in Iran