Urmia is famous for Dar-ol Neshat (land of happiness), Paris of Iran, City of Water, City of Religions and Tribes. This city is 3000 years old. There are several Urmia tourist attractions in both historical and natural realms:

With an average annual temperature of 9.8°C, Urmia is relatively warm in summer and very cold in winter. The rainy season begins in late October and early November and continues until May.

Urmia freezes120 days a year and its average annual precipitation in Urmia are 360 mm.

There are different ways of traveling to Urmia City:

Traveling by car from Tehran to Urmia starts from the Tehran – Karaj highway and reaches Qazvin. Then, after passing by Abhar, Zanjan, and Tabriz cities, you will reach Urmia. It is 765 kilometers from Tehran and it takes 8 hours and a half by car.

For traveling by bus from Tehran to Urmia, you should take the buses leaving from Beyhaqi Terminal (Argentina Terminal) or the West Terminal for Urmia.

It takes 1 hour from Tehran to Urmia by plane. There are urban buses and taxis from the airport to the city center.

The Railway is partially under construction, but you can go to Tabriz, Maragheh, or Zarei stations by train and from there, set off for Urmia. It is about an hour and a half from Tabriz to Urmia. It takes about 10 hours from Tehran to Tabriz by train.

Population and Economy of Urmia

As it is located on a trade route, Urmia is a customs for export and import of goods. In addition, this city is a local market for the purchase and sale of agricultural and nomadic products around the city.

The farms and gardens of this city have formed Urmia tourist attractions for those who love rural tours or farm tours.

This city is 3000 years old. This city is one of the 19 historical cities in Iran, with some monuments inscribed on UNESCO World Heritage List. That is why Urmia tourist attractions bring lots of visitors to this city every year.

In the past centuries, the city has experienced many events such as occupation by the Ottomans and the Russians. In addition, due to its location in the great transit road between the Caucasus, the Middle East, and Asia Minor, it was the business center of the region in the past.

Historians believe that the foundation of Urmia dates back to the second millennium BC. It is as ancient as Sardis and Nineveh cities.

The archeologists have found several ancient objects from the historical mounds near the city. Urmia was among the cities of the ancient Urartu Kingdom in the late 2nd millennium BC and early 1 BC.

After the advent of Islam in Iran, this city was one of the rich settlements in terms of fruit production and land fertility. During Daylamite’s reign over Azerbaijan, conflict, and war broke out in the city many times. This reduced the thriving process of the city.

In the 18th century, the Ottomans defeated the Afshar tribe, lived in Urmia Plain, and entered the city. However, Iranian forces freed Urumia over time.

During the First World War, different countries seized Urmia several times. During the wars between the Assyrians and the Turks, all the Assyrians gathered in the Urmia Plain.

During the Pahlavi era, the situation of the city began to recover gradually. The Russian and British political rivals prevented the foundation of the railroad in the northwestern part of Iran during the First World War. In the Pahlavi period, the government changed the name of the city to Rezaeiyeh. After the 1979 Islamic Revolution, the name returned to Urmia. 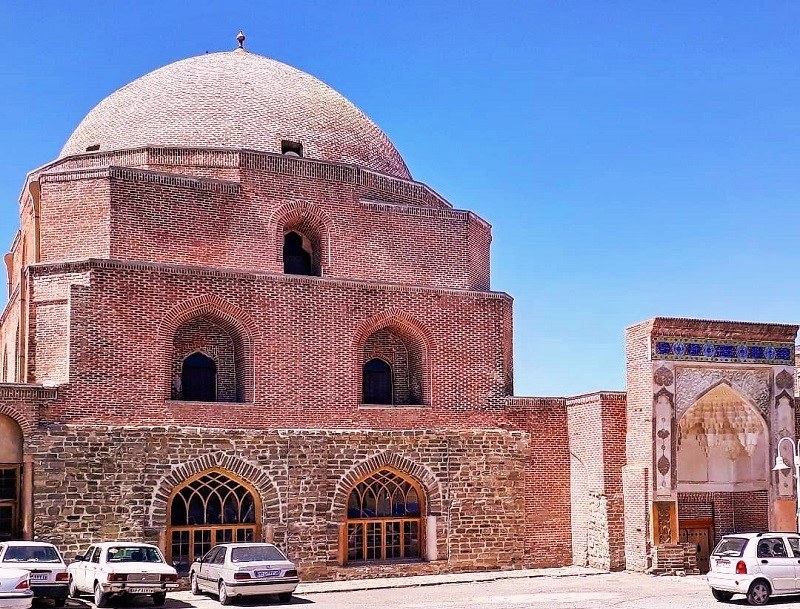 This magnificent monument belongs to the Ilkhanid era, constructed in the 13th century. This mosque is located in the Bazaar and has access to the main passageways from three directions. It is a beautiful monument serving as one of Urmia tourist attractions.

These buildings were constructed about 200 years ago during the Qajar era, belonged to a military commander of the Qajar dynasty. Among these monuments, there is a mosque and a Hosseiniyeh. The people call the mosque General Mosque. These houses are located in Asgar Khan Street. 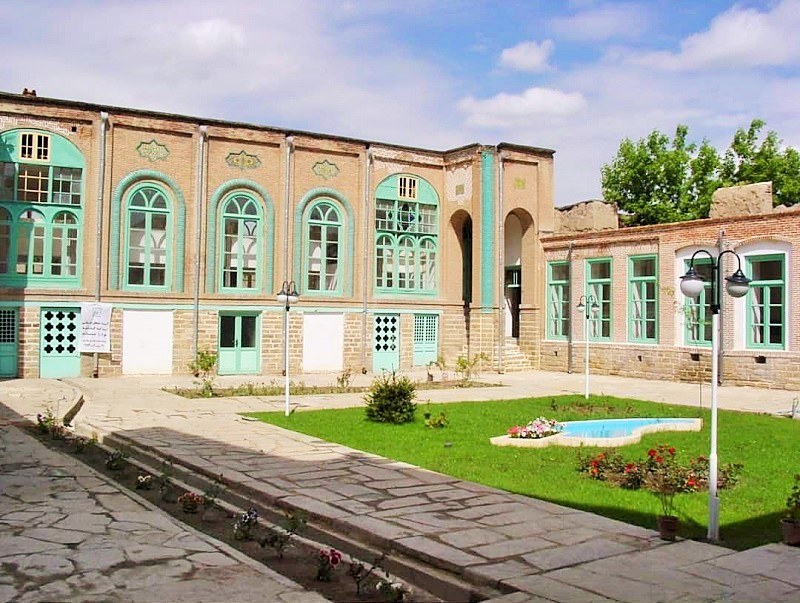 This is a house that remained from the late Qajar era and built between 1912 and 1922. Ansari House is located on Imam Hossein Square (known as Gol Uste Square) and is a symbol of the house construction in the cold and mountainous climate of Iran.

Urmia Municipality
The municipality building was constructed by the orders of Pahlavi I and dates back to 1929. In 1942, the Russians bombed the area and subsequently destroyed a part of the southern facade of the building. The Germans had planned and designed the municipality building in the form of an eagle with open wings to symbolize their country. 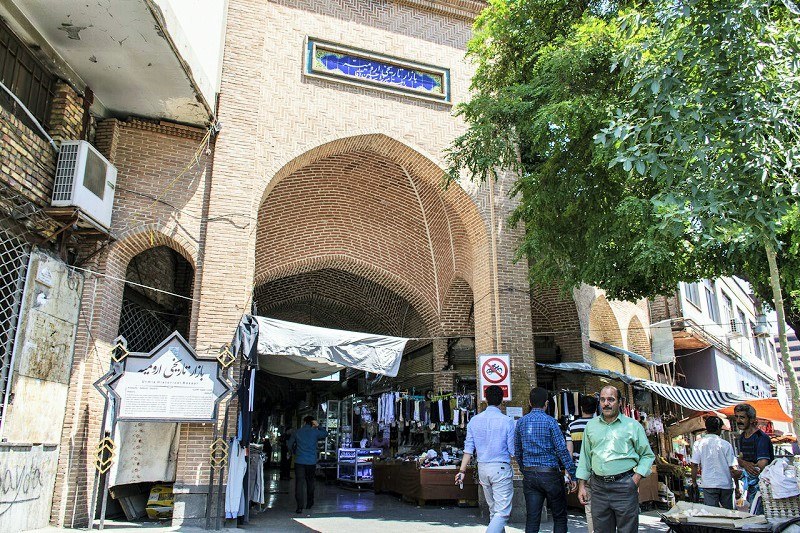 Like most other cities in Iran, the bazaar is the heart of the business of the city. Some parts of this bazaar date back to the Zand and Qajar periods. There are many bathrooms and caravansaries in the bazaar. Among the main passageways, there are shops of coppersmiths, knife makers, goldsmiths, carpet sellers, seed sellers, crystal dishes vendors, shoemakers, and herbalists.

This old bazaar is considered among Urmia tourist attractions for the domestic and international travelers who visit the city. 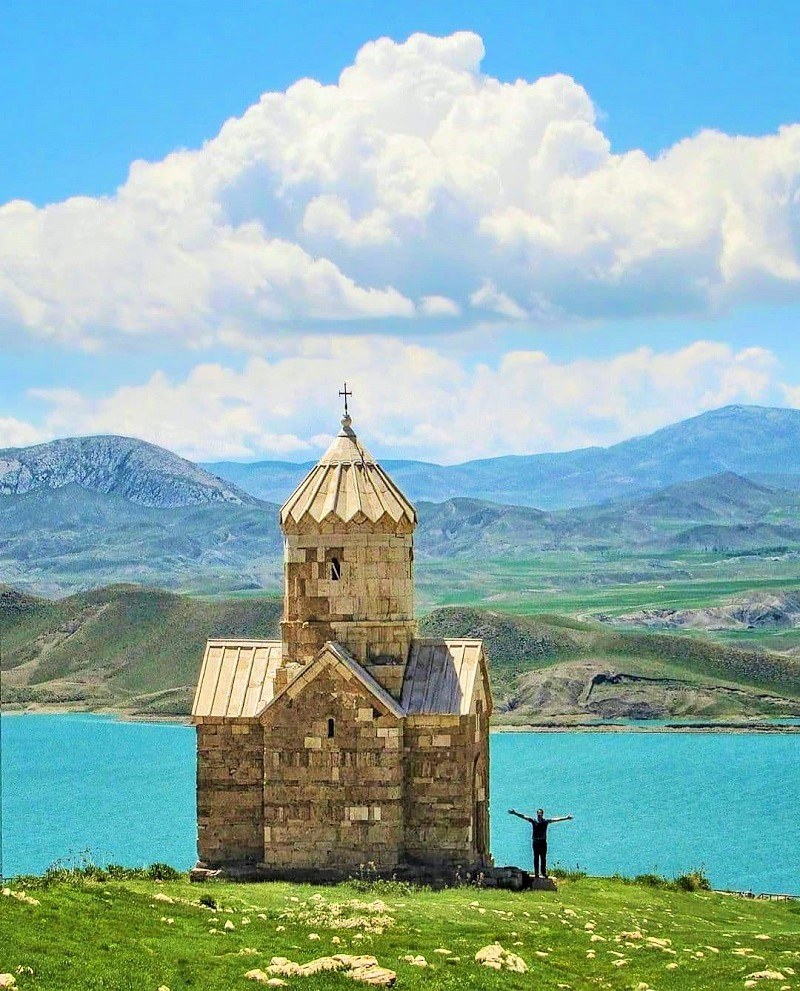 The archbishop of St. Thaddeus Church (Zakaria) has built this monument approximately some date between 1315 and 1324. The Chapel of Dzordzor is one of the Armenian Monastic Ensembles of Iran inscribed by UNESCO. This chapel is located is in Maku town, 280 km north of this city.

For those who travel to the northwest of Iran, this is one of Urmia historical attractions, which they should drive to and visit. 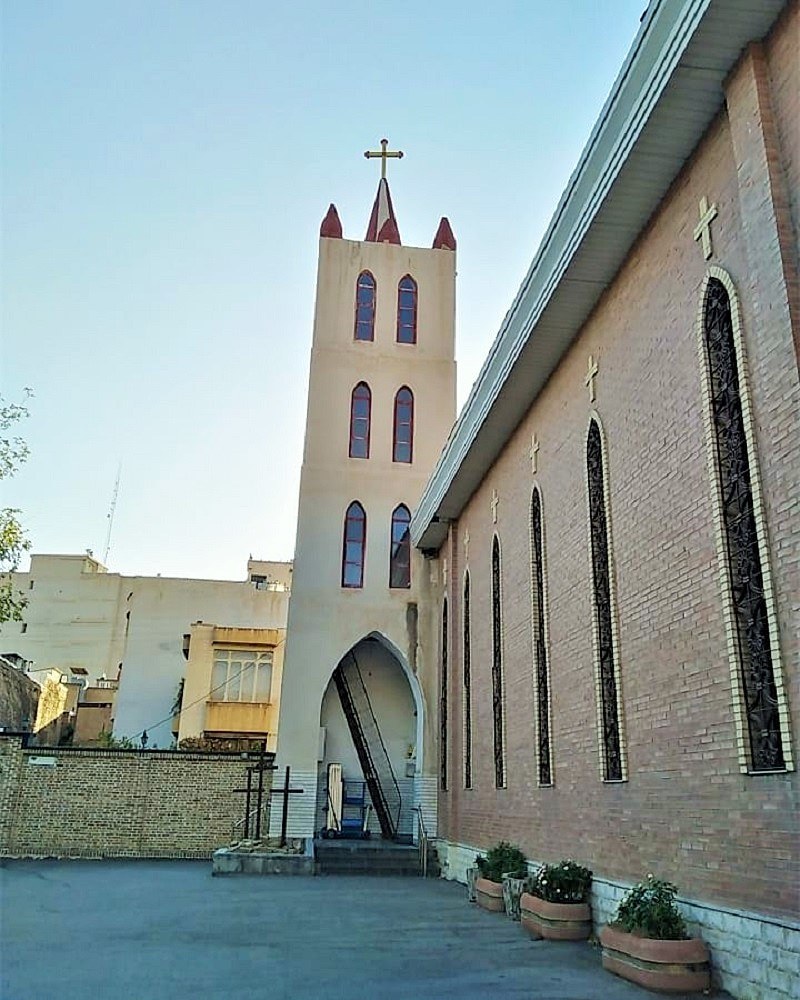 According to some Assyrian and Armenian researchers, this monument used to be a fire temple first. During the Sassanian era, it was converted to a church. It is architecturally a simply-designed building with no decorations inside. 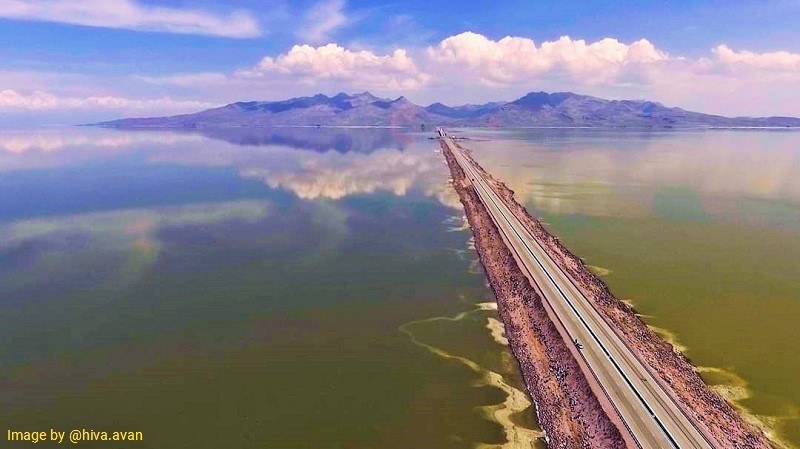 This lake is the largest and saltiest lake in Iran. In addition, it is the second-largest saltwater lake in the world. In this respect, it has a similarity with the Great Salt Lake of the U.S. The lake is located 17 km east of the city.

Sheikh Tappeh Forest Park
With an area of 44 hectares, this park is located in the southeast of Urmia, at the heights overlooking the city and adjacent to the historical mound of Sheikh Tappeh. This ancient mound belongs to the Medes before the Zoroastrian religion became widespread in Iran. Today, because of urban construction, there is no trace of this forest park.

Shahrchay Dam Lake (Silvana Lake)
The Shahrchay river originates from Kan Kaboutar Mountain with an altitude of 3,271 meters, one of the Kordestan mountains. It also passes by a mountain range in Turkey. After digging a valley in the heights, the river enters Bardehsur village of Urmia. There, some branches join the river along the way and irrigate the lands on their route. Eventually, it reaches Band Village near Urmia. 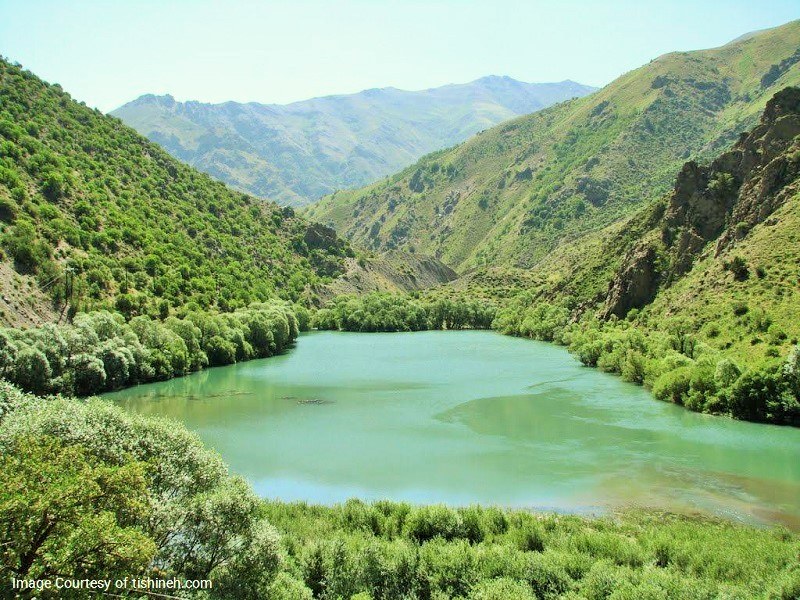 This lake located about 45 km west of the city and is far from Urmia Lake. The nature around this lake is pristine and is located in the mountains adjacent to the Iran-Turkey barrier. The primary source of the Marmisho Lake is in Turkey, but after embracing other waters of its basin, it forms the Nazlouchay River.

This is one of Urmia natural attractions that brings several visitors to the city every spring and summer. 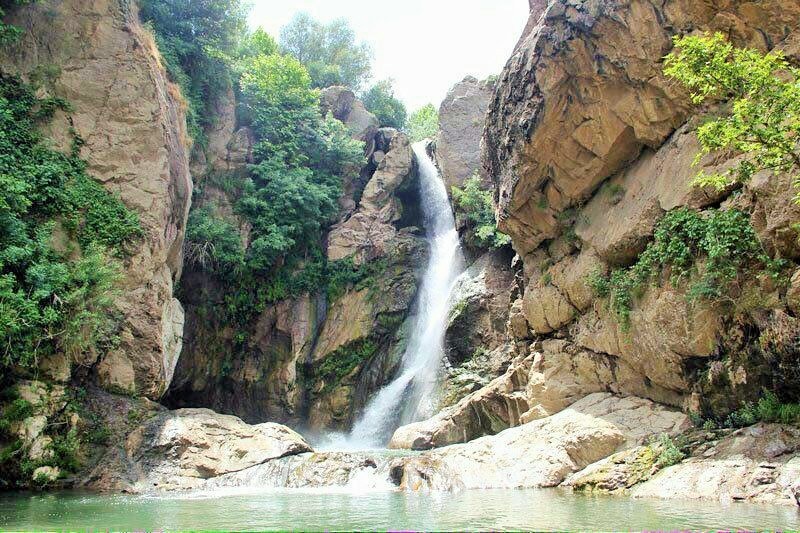 This cascade is located near Shomalkan village, 4 km south of the city. Access to this village is mainly through Band village. There is a destroyed castle on this way, of which there have remained only a few columns.

Shohada Valley
There are large rivers with a high volume of water in this area. In addition, there is good vegetation around the river and many animals live there. This valley has got an area of about 35,000 hectares and is located on the roadside of the Urmia-Oshnavieh road, 35 kilometers southwest of the city, in West Azerbaijan Province. Iranian Department of Environment has forbidden hunting in the valley. Since 1997, this department has been protecting the endangered sheep and mouflon. 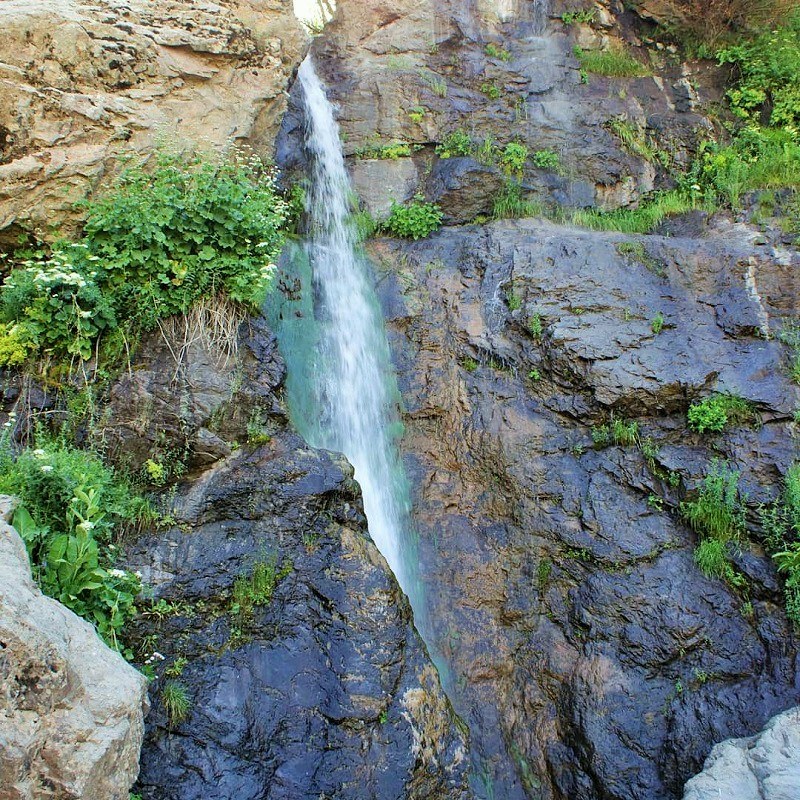 This waterfall is located in the Soluk Village, 32 km west of Urmia City on the lush hills of the border between Iran and Turkey, and on the foothills of Bardah Rash Mountain. The valley has a fantastic view and leads to the waterfall.

The height of the cascade is approximately 76 meters, and the snowy mountains of the Zagros mountain range supply its water. Certainly, this is one of Urmia natural attractions that nature lovers choose to visit.