Birjand is an amazing city in the eastern part of Iran with lots of historical and natural attractions. It has enjoyed a great boom in various periods of the history of Iran due to its location on the Indian commercial route. The presence of caravansaries, as well as small and large bazaars, prove its thriving economy in the past. The complex of gardens, mansions, citadels, and other buildings in the city along with farming fields and natural attractions outside the city is the spectacular tourist destinations of Birjand.

The climate of Birjand is semi-desert. It has a cold winter, and a hot and dry summer. The average annual temperature is 16 °C and the average annual precipitation is 35.8 mm in Birjand. The city is also located at an altitude of 1,470 meters above sea level.

Here are the different ways of traveling to Birjand:

There are flights from Birjand airport to Mashhad and Tehran a few days a week. It takes about one hour and a half from Tehran to Birjand by airplane.

Population and Economy of Birjand

According to the 2016 Iranian Population and Housing Census, the population of Birjand was 203,636 people. The most popular traditional products of Birjand are food products that are a part of the traditional economy of the city. These products include:

There are also other products in the city exported to other cities and countries:

At the end of the Sassanid Empire, the Zoroastrians of Yazd and Kerman founded the city of Birjand as a settlement on the margin of the desert and on the way of passing from the desert to the north of Khorasan and Transoxania.

The petroglyphs and inscriptions are written in the Parthian language present in the city show several thousand years of the antiquity of Birjand.

In addition, the Zoroastrian cemeteries in most villages and the numerous fire temples in this region prove the long history of Birjand. The names of some villages near Birjand have remained from the Pahlavi language and have mythological origins.

After the advent of Islam in Iran, Birjand experienced more development. Some historical books described the city as follows: “Birjand water is supplied from Kariz (Qanat), and the people are all Shia Muslims.”

At the end of the Safavid period, with the penetration of Western European countries into India and East Asia, by sea and land, travelers, tourists, or agents were often visiting Birjand because it was located on the major connecting path.

In 1876, the trade flourished in Birjand through Bandar Abbas and the population of the city grew. Due to water shortages in the Qajar period, the city of Birjand was slowly developing, but it remained the center of the area.

At the beginning of the 19th century and after the war of Iran in Herat, and the supporting role of Birjand in this war, Britain founded in 1894 a consul in Birjand for preserving its interests and colonies in the Indian subcontinent and expanding its influence in Afghanistan. Following the establishment of this consul, the tsarist Russian government also established its consul in Birjand.

Gradually, with the outbreak of World War II as well as the Russian Revolution, the political rivalry between Britain and Russia in Iran declined. As a result, the two countries closed their consuls.

The first cinema Birjand began its activity in the late Qajar era with silent movies.

In the first years of the Pahlavi era, the city became the major military center. Birjand was the second city after Tehran for which the Iranian government provided urban water plumbing in 1924.

After 1924, the development of the city grew rapidly. During World War II, the Allies built Mashhad to Zahedan Highway, which became one of the main ways of communication of Allied. The highway competed at that time with Iranian railways. After that and until today, Birjand has experienced a modest development.

Birjand is a city with several tourist attractions. Some of them are of historical value and you can find them inside the city: 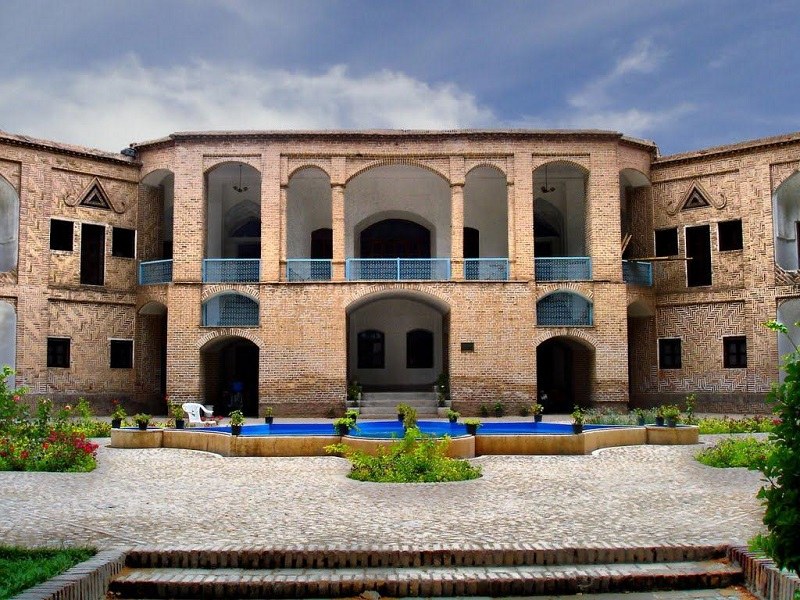 UNESCO has inscribed this complex as one of the Iranian Gardens in the World Heritage List. The building and its area belong to the Qajar era constructed with the architecture style of Iranian gardens including two mansions, a pool, and an enclosed garden within the city.

Some parts of Akbarieh Mansion have now changed to Anthropology and Archeology Museum where you can see very interesting fossils of this area. The construction of this building dates back to 1906. Initially, it began the activity with 7 Austrian teachers, some Iranian translators, and 40 students. It is worth mentioning that this school was the third school in Iran with modern teaching methods after Dar ul-Funun of Tehran and Roshdiyeh of Tabriz. 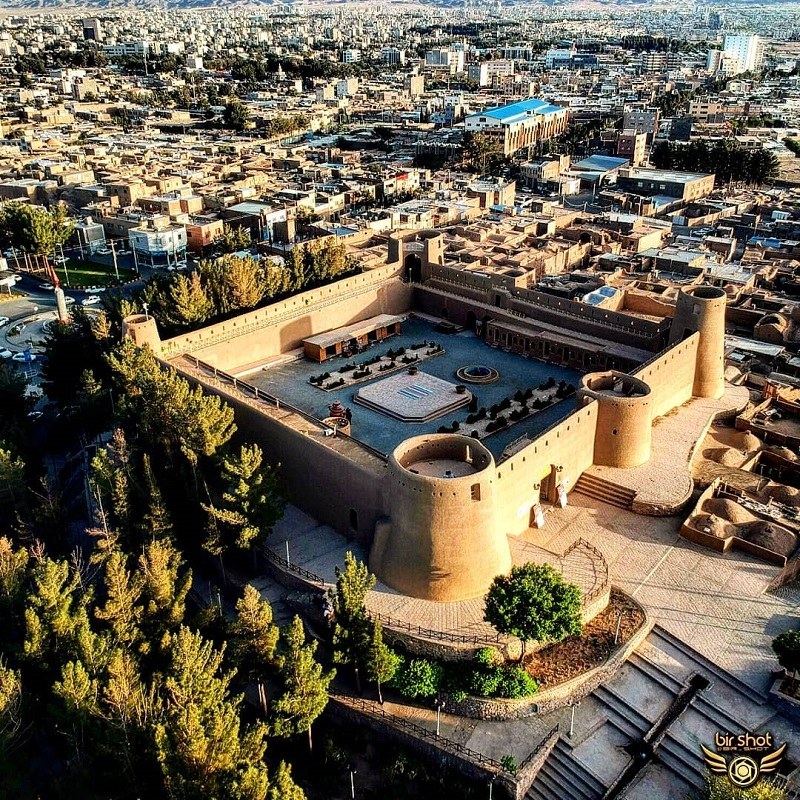 This defensive complex is a historical attraction located on a mound overlooking the urban area of the city. Local people believe that there is a tunnel reaching into the castle through some houses. In the past, this tunnel was a way to transfer people to the castle for shelter in an emergency.

Kolah Farangi Citadel (Amir Hassan Khan Citadel)
This citadel was the governor’s seat built at the end of the Zandieh period. In terms of architectural form, the monument is generally different from other urban buildings. This citadel has a hexagonal shape and at the top, it has a cone-shaped and white color. Kolah Farangi Citadel has beautiful decorations and Muqarnas. 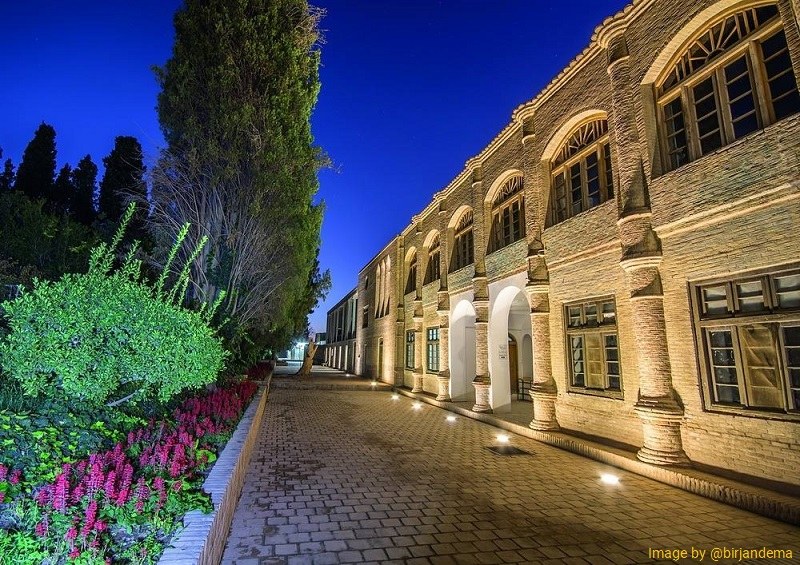 This historic complex includes fencing, watchtowers, garden, main mansion, pond, pavilion, stables, and service spaces. The garden represents the Iranian garden style. In addition, the building dates back at least to the Zandieh era. In the center of the garden, the architects built a mansion with architectural features of the late Qajar and early Pahlavi architectural style.

Baharestan Citadel (Zereshki Gardens)
The construction of this building dates back to the Afsharid period and around 1791-1792. Some historians believe that once Lutfali Khan Zand and his companions took refuge in this citadel and spent some time there.

Old Post Office
In the past, Iranians used this building as an arsenal. It was later used as a post office in Birjand until 1983. Nowadays, the Iranian government has restored it and changed it to the administrative building of Birjand Historical-Cultural Heritage Center.

Chahar Derakht Mosque
This building dates back to the late Qajar period and is located in an area by the same name where several of Birjand tourist attractions can be found. The Iranian National Heritage Organization inscribed it on the heritage list. The architecture and the design of the mosque are limited to Shabestan. There is an altar for Shia worshipers and another for the Sunnis. This house remains from the late Qajar era built with a stair form on a mound. This is the only house accessible from 3 passages on three sides. It has various sections such as an entrance portal, vestibule, Dalan (the hallway), eyvan, central courtyard, and the rooms around the central courtyard. The decorations of this house are mainly the brickwork of the Pahlavi period.

Tekyeh Navab Complex
The architects built this complex during the Qajar period under the command of an adherent woman of Islam. The major feature of this building is its beautiful decorations, including Muqarnas, Rasmibandi, gypsum inscriptions, and arabesque and vignette stuccos.

Birjand Bazaar
Birjand Bazaar is a major tourist attraction. It has ancient caravansaries among other amazing spots. Some of them date back to more than 300 years ago. As the bazaar is near the borders of Pakistan, Afghanistan, and even India of that era, it has become the unique bazaar of the region and the east of Iran. In the past, the Indian merchants came to Birjand and imported Indian spices to Birjand Bazaar.

Here’s a list of amazing places to visit outside Birjand: 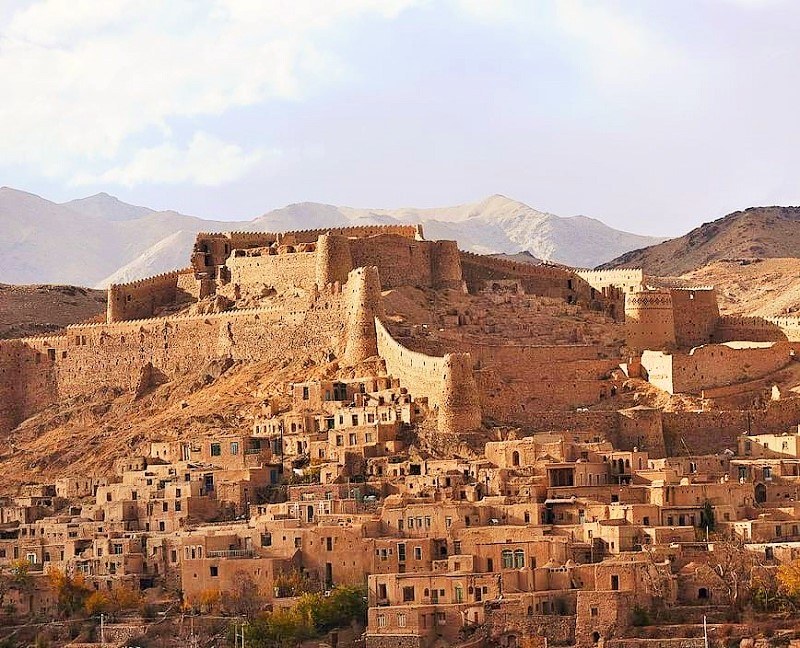 This citadel is located in a village of the same name in the 5 km of Darmian Village and in the east of Birjand City. After Alamut Castle, this citadel was the most important military base of the Ismailis, and they trained the absolute Fedayeens (military groups willing to sacrifice themselves) here. In addition, the last step of its architecture is related to the Afsharid period.

Bahlgerd Garden and Mansion
The complex is located 150 km northeast of Birjand, alongside the Birjand-Zahedan road and in Bahlgerd Village. The garden and mansion complex consists of several sections such as entrance, vestibule, inner courtyard, crew residence, outer courtyard, and stable. Iranians built Bahlgerd Gardens and Mansion as a resort site for the local ruler during the Qajar period.

Amir Abad Garden and Pavilion
This complex is located 5 kilometers west of Birjand. It dates back to the early Qajar period. The architects used the traditional Iranian motifs and decorations in this building. Currently, the Iranian government dedicated some parts of this complex to the library, university, museum, and traditional restaurant and cafe.

Band-e Darreh or Darreh Dam is the major historical site of Birjand dating back to the Zand Era, the 18th century. The water behind the dam has created a lake. In addition, there is a recreational area around the dam for visitors.

Here’s a list of beautiful places in the nature outside Birjand:

Boneh Rach Tree
Birjand has many ancient trees, some of them dating back to 500 years ago, including Boneh Rach, Yekkeh Derakht, and Boneh.

Attractive Farms of Barberry and Saffron 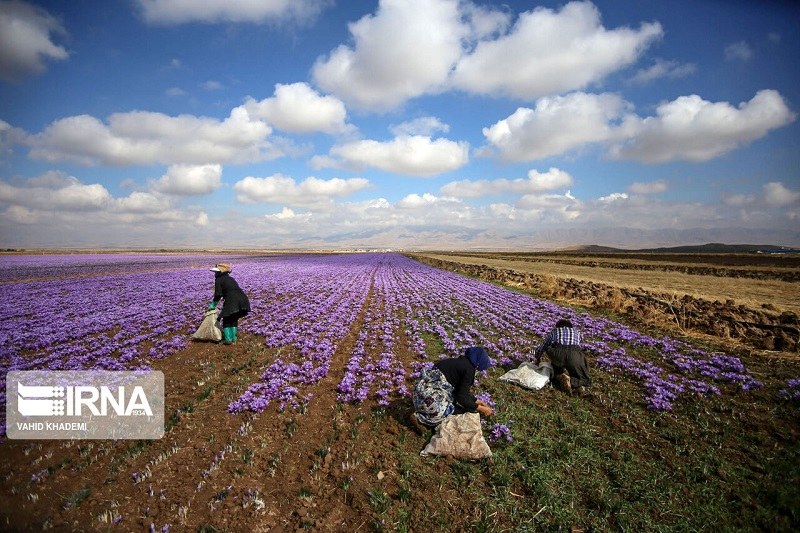 These farms with their unique attractions and special colors in November are among the major tourist attractions of Birjand. 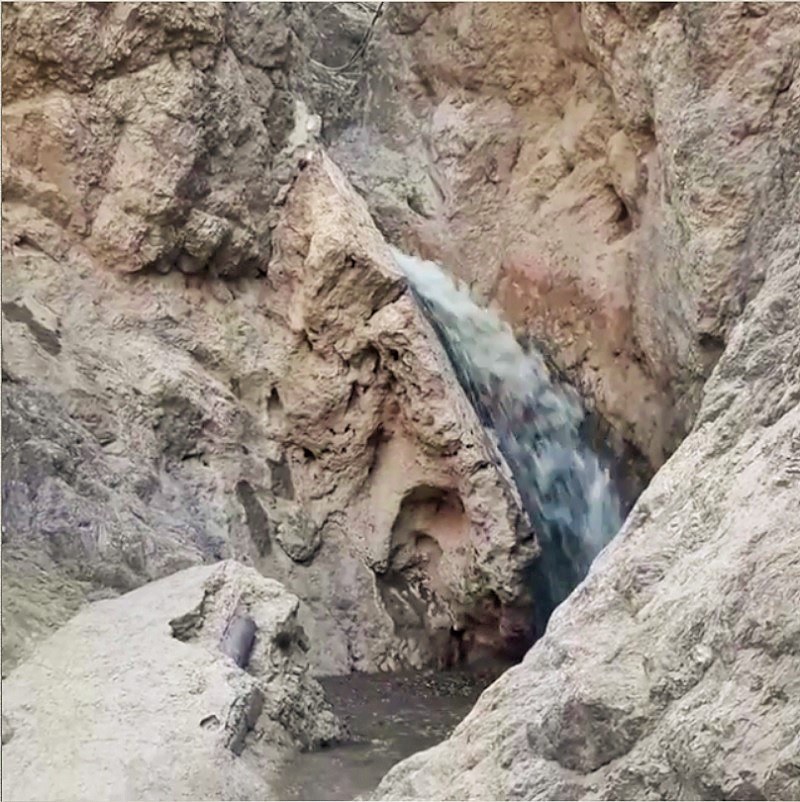 This waterfall is located at the bottom of a lush valley. In recent years, due to the construction of a dam, the landscape has lost some of its beauty. The waterfall is located near the Giuk Village, in 5 kilometers of Birjand to Kerman Road. There are the gardens of barberry, almond, berry, grape, and apricot on the way to this waterfall.

Planning Your Persian Odyssey: Preparing for Your Trip to Iran