Khorramabad is an ancient city of Iran and the capital of Lorestan Province. This region has got some of the most ancient discoveries in the world. The city has flourished after devastations and invasions. Today, it has a lot to offer. The people of this city are hardworking and proud of their legacy.

This city is the 23rd most populated city in Iran and the capital of Lorestan Province. The city is located at an altitude of 11,478 meters above sea level, among the Zagros valleys. The city reaches Selseleh County on the north, Borujerd on the northeast, Doroud and Aligoudarz counties on the east, Andimeshk County on the south, and Dworeh and Pol Dokhtar counties on the west and southwest.

Khorramabad has a Mediterranean climate with a large volume of rain, especially in spring and winter. In terms of rainfall, this area is the sixth rainiest province of Iran. The average annual temperature is 17.2ᵒC and the average annual precipitation is 509 mm.

There are several options to reach Khoramabad:

This airport has only round trip flights to Mashhad and Tehran. It takes about an hour from Tehran to Khoramabad by plane.

Here are the roads connecting Khorramabad to the most important cities in Iran:

Kermanshah–Khoramabad Road: This road reaches the northwest of the city. You must take Takavar-Nurabad-Aleshtar road and reach from Kermanshah to Khoramabad.

Ahvaz-Khoramabad: This road reaches the city from the south. You must take Ahvaz-Shush-Andimeshk road to arrive at Khoramabad.

Isfahan-Khoramabad: This road reaches east of the city. It starts from Isfahan and continues to Najaf Abad, Daran, Aligoudarz, Azna, Doroud, and gets to Khoramabad.

Tehran-Khoramabad: You can reach the city from the northeast by taking the Tehran-Khorrmabad road via Qom-Salafchegan-Jalayer-Razan. The distance from Khoramabad to Tehran is 490 km.

Due to its location on the road from Tehran to the south of Iran, this city has strategic and communicative importance. Iran No. 5 highway passes through this city.

According to the 2016 Iranian Census, the population of Khorramabad was 373,416 people.

The economy of Khorramabad is based more on agriculture, livestock, horticulture, handicrafts, and, to some extent, engineering industries. The leather industries, agro-industries, and generator making are among the active factories in Khoramabad. In addition, the cement factory, power plant, and steelmaking are the new industries in the city.

Lorestan is one of the first settlements in ancient Iran. Khorramabad, the capital of Lorestan Province, had played a very significant role in western Iran during the Sassanid era.

In the first periods of civilization and the appearance of government in Lorestan, the Kassites ruled in this region.

Khaidalou (the old name of the current city) was one of the major cities of the Elamite civilization in the distant past, before the advent of the Medes, Achaemenids, and Sassanids.

It is said that Shapur II, the king of the Sassanid Empire, built Shapur Khwast City (former name of the city during the Sassanid Empire) on the ruins of Khaidalou. During the reign of the Elamites on the west of Iran, Kheidalu, along with Madakto, Ahvaz, and Susa, was the major city of this ancient civilization.

The Elamite government ruined the city in 600 BC. After that, Shapur I, the Sassanid king, ordered the construction of a great and magnificent city in the same place in the 3rd century. This city remained from the time of Shapur I is the current Khorramabad. In the late 13th century, Shapur Khwast was destroyed and completely abandoned.

This city continued as an important city during the reign of the Safavids and after the fall of Atabakan Dynasty in Lorestan. The Safavids gave importance to the prosperity of this city.

During the Qajar period, the beautiful city of Khorramabad included only a part of the neighborhoods surrounding Falak-ol-Aflak Castle. During this period, immigration to the city increased from small and large cities, which led to the emergence of new districts and the development of Khorramabad.

During the Pahlavi era, Iran constructed the stables, barracks, and headquarters for a division of the Iranian Army within the castle of 12 towers and Falak-ol-Aflak Castle.

During the eight years of the Iran-Iraq war, Lorestan Province had a lot of military and strategic importance due to its neighborhood with the three border provinces in the west and southwest. The Iraqi Army launched airstrikes against Khorramabad several times. It is the 5th most bombed city in Iran after Abadan, Ahvaz, Dezful, and Ilam.

Meanwhile, Lorestan province is the second most damaged province in terms of financial losses caused by the Iran-Iraq war.

There are amazing historical places such as Falak-ol-Afalak Castle and Brick Minarets inside and outside this city. Khorramabad tourist attractions bring a large number of Iranian and non-Iranian tourists to this city every year.

Keeyow Lake is the only natural lake inside a city of Iran. This province is the first human settlement in Iran, dating back to 40 to 50 thousand years ago. In recent decades, archaeologists have discovered caves in which the Neanderthals used to live and thrive. They are now some of Khoranabad tourist attractions.

The people of Khoramabad are mainly Lurs. The history of Lurs shows how hard they have worked to bring the wild nature around them under control. They are well-known as the ancient makers of Lorestan Bronze objects. There are still some Lure nomads living around this city. One of Khorramabad tourist attractions is to visit them. 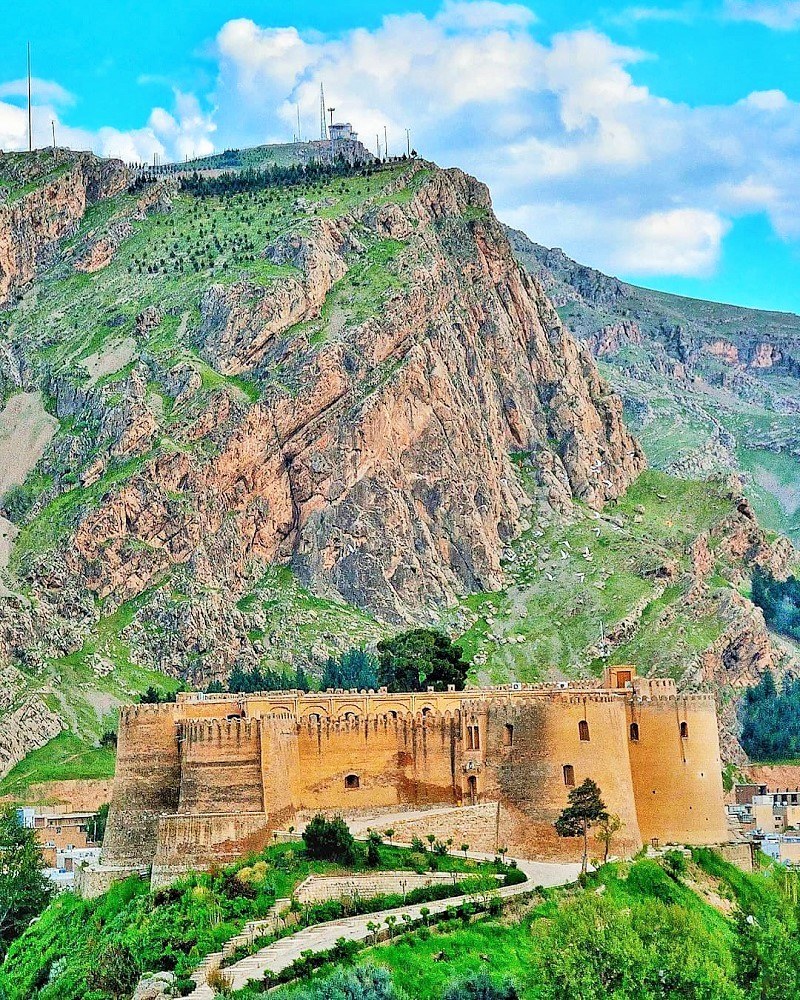 This is one of the most famous historical monuments in Khorramabad located on the ancient mounds and in the center of this city. The construction of this castle dates back to the 3rd century during the rule of Shapur I, the Sassanid king.

The position and placement of the castle on the rocks make it valuable and worthwhile. You can see the historical valley of Khorramabad through this castle. It is one of Khorramabad tourist attractions that you don’t want to miss when you visit this city. 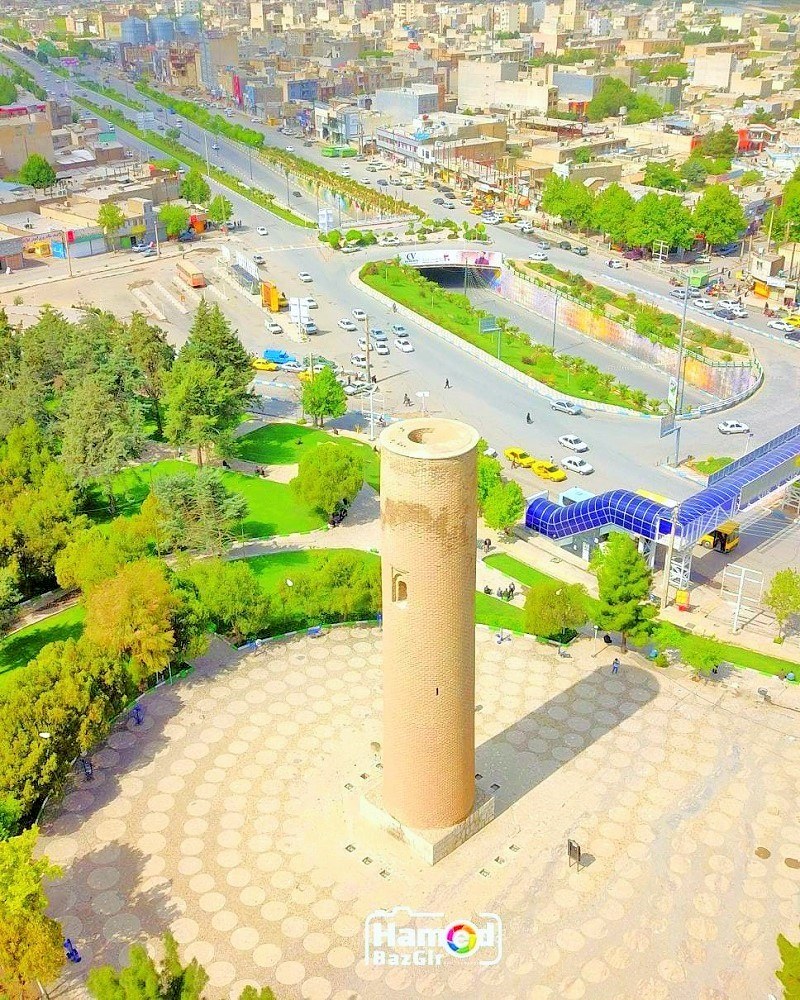 This cylindrical-shaped minaret is located on a cuboid rocky platform in the south of Khorramabad, in Ghaziabad Neighbourhood. This minaret is known as “Brick Minaret”. In the past, Iranians used this monument as a watchtower for observing and guiding the caravans passing through the city as well as protecting the city. Historians estimate that the construction of Brick Minaret dates back to Dylamite Dynasty.

Shapuri Bridge (Broken Bridge)
There are several ancient bridges in the region that are considered Khorramabad tourist attractions today.  Shapuri Bridge is one of them located near Falak-ol-Aflak Castle of Khorramabad, on the south side of this monument.

The monument dates back to the Sassanid era, a masterpiece of the Iranian architectural art of that period. Once, it was the access road of the west of Lorestan with eastern Lorestan, Khuzestan, and Ctesiphon, the Sassanid capital.
‌
Tomb of Baba Taher
This tomb belongs to Baba Taher, the famous Iranian poet, and mystic. It is located in the center of Khorramabad and on the western side of Falak-ol-Aflak Castle. The tomb of the famous poet is located inside the basement or crypt. There used to be a wooden shrine around the tomb but today, there is no trace of it.

Khorramabad Friday Mosque
The architects constructed this monument in 1563, under the command of a king of Atabakan Dynasty of Lorestan. The current monument has experienced several restorations and repairs in different eras. There are three inscriptions in this mosque including the law of the Safavid Dynasty. 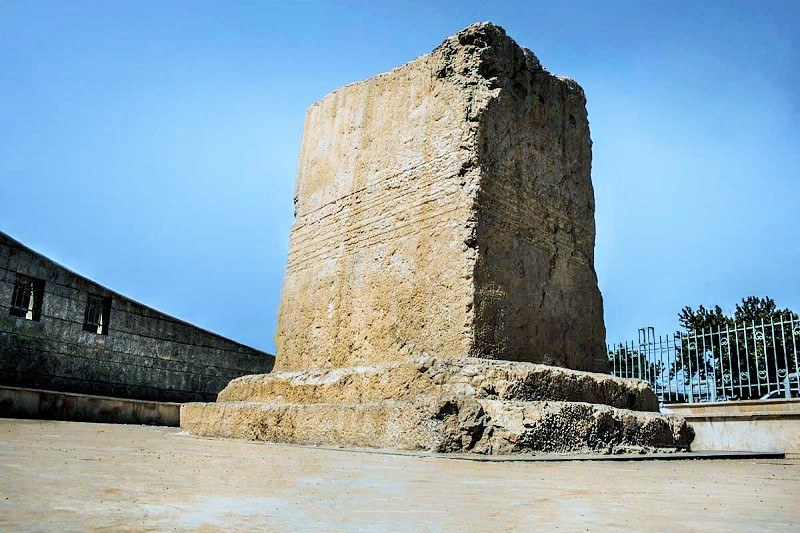 This monument has remained from the Seljuq era and belongs to the 12th century. It is located in the east of Khorramabad. There are inscriptions on four sides of it carved in Kofic script in the Persian language.

Gerdab-e Sangi (Gerdau Bardineh)
This is a monument that remained from the Sassanid era, located in the central part of Khorramabad and among the old texture of the city, on Takhty Square. The architects built this circular-shaped structure, with a huge wall of rocks, and Sarooj (traditional Iranian cement).

Iranians built this historical structure to irrigate the land and to use the watermills. 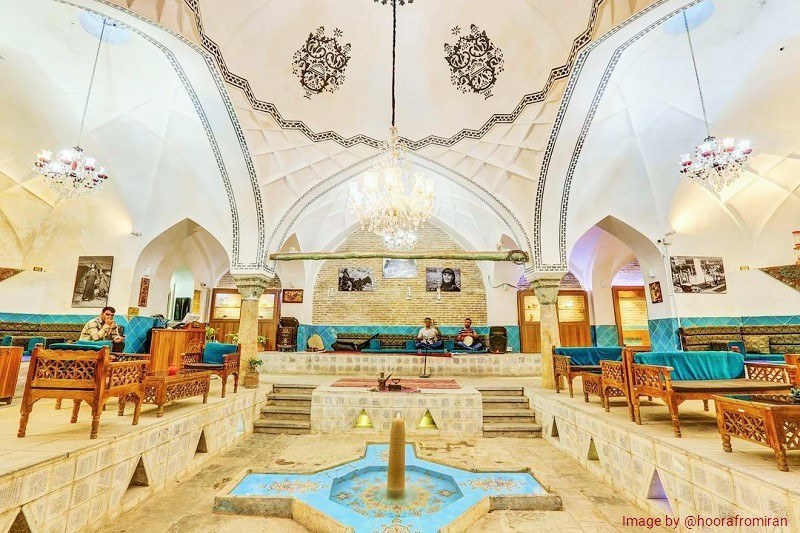 This building belongs to the Safavid era and is located near Gap Square in the city center. If you ever travel to this city and look for a place to refresh, this is an ideal place and one of Khorramabad tourist attractions.

Gabri Water Mill
The mill is located in the southern part of Khorramabad, in Hossein Abad Neighbourhood. This building dates back to the Sassanid era.

Keeyow Lake
Famous as the Turquoise Gemstone of Khorramabad, Keeyow Lake is located in the northwest of the city, with an area of 7 hectares and a depth of 3 to 7 meters. The lake is a habitat for aquatic animals and migratory as well as native birds.

The waterfall is approximately 80 kilometers away from the center of the city, about an hour and thirty minutes. It is one of the most outstanding places in nature for Iranians. This waterfall is one of Khorramabad tourist attractions. 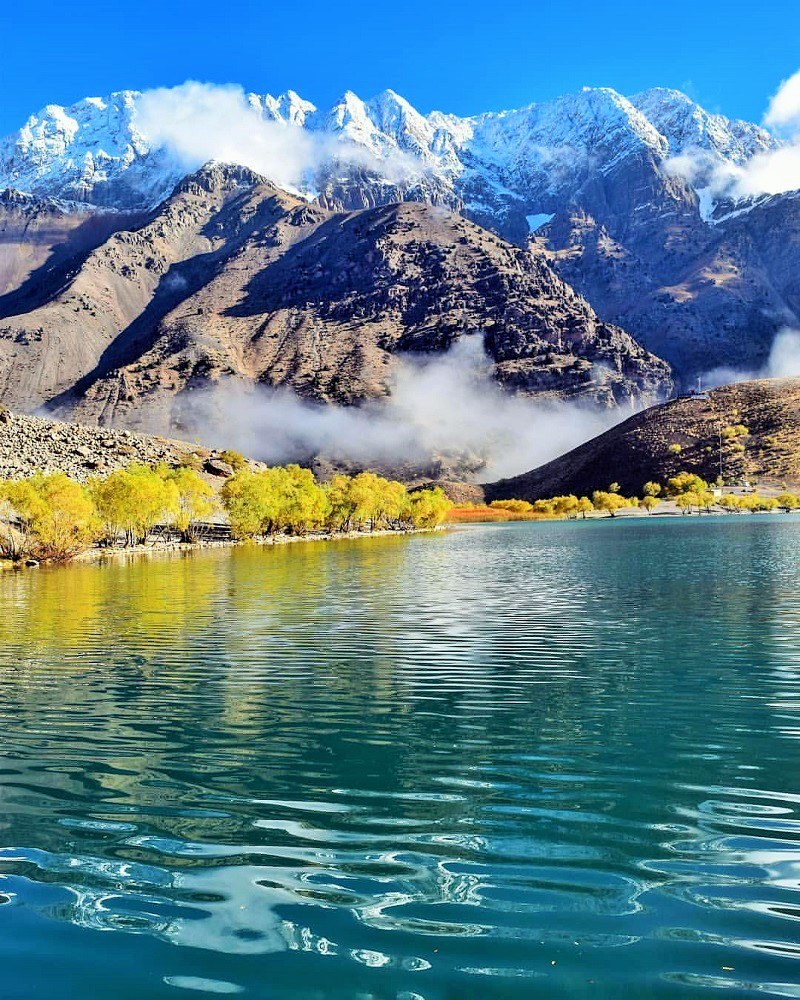 The lake is located approximately 120 kilometers from the city center, about two hours and thirty minutes away. 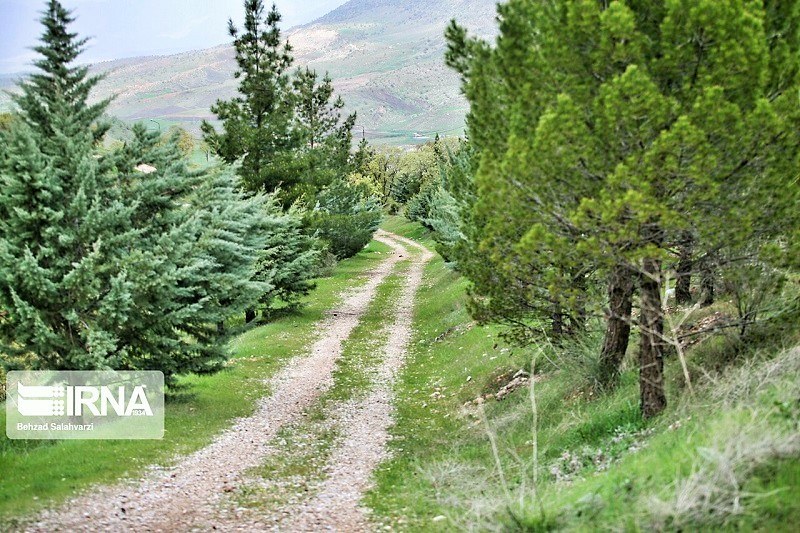 This forest is located about 50 kilometers, about 45 minutes, away from the city center. There are varieties of plant species in this forest. 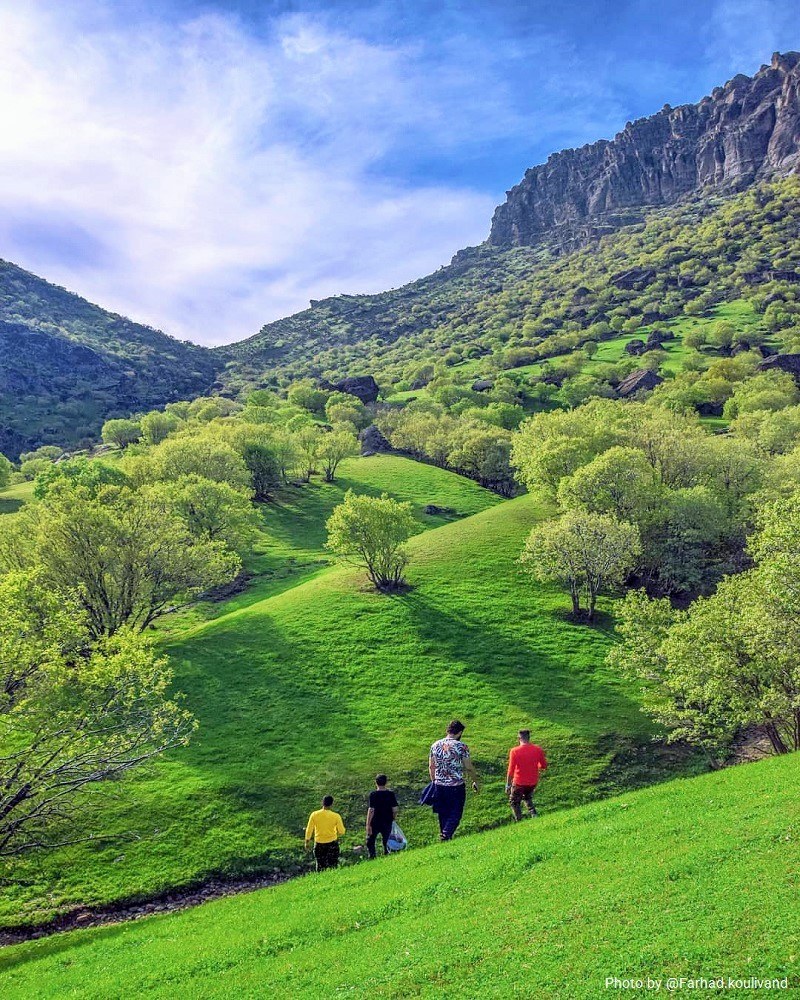 This forest is about 9 kilometers, about 15 minutes, away from the city center. For those who are looking for pleasant Khorramabad tourist attractions combined with some physical activities, this is the place to go.

Nozhian Waterfall
The waterfall is approximately 41 kilometers, about an hour, away from the center of Khorramabad.

Ney Gah Valley
The valley is located approximately 120 kilometers, about two hours and thirty minutes, away from the center of Khorramabad.

The valley is located 140 kilometers, about two hours, away from the city center. The breathtaking scenery of this place is so amazing that has placed it among the Khoramabad tourist attractions list.