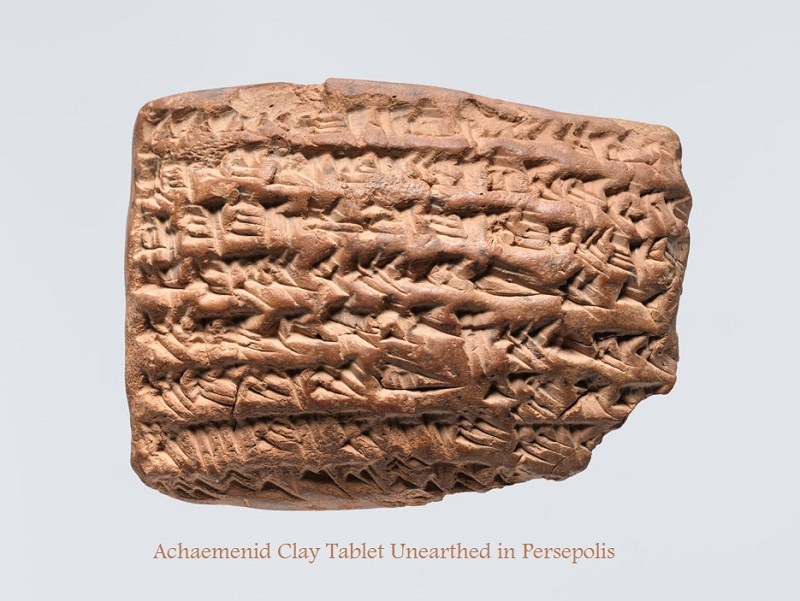 During his visit to Pars tourism exhibition in Shiraz in 13 December, Ali Asghar Munesan, Vice President of Iran and Head of Iranian Cultural Heritage, Handicrafts and Tourism Organization, said that some 1784 Achaemenid clay tablets will be back soon from the US to Iran, according to IRNA.

It is estimated that approximately tens of thousands of artifacts currently exist in Chicago University that were found in Persepolis, Iran. Recently, it has been arranged for 1784 of them to return home soon.

According to Munesan, the rest of the tablets will be returned to Iran in the next three years. However, Iran is trying to shorten the time.

Why Achaemenid Clay Tablets of Iran Are in the U.S

The researchers and archaeologists from Chicago University discovered the tablets in 1933 during an excavating project in Persepolis, the site of a major Oriental Institute excavation.

In 1935, during the rule of the former Iranian regime, over 30,000 pieces of Achaemenid tablets were given to the Oriental Institute of the University for deciphering and further Academic Studies, but they were not returned back to Iran.

The artifacts include cuneiform script explaining administrative details of the Achaemenid Empire, from about 550 B.C to 330 B.C. In other words, they are the world’s most ancient accountancy documents.

According to Gil Stein, the director of the Oriental Institute of Chicago University, this Institute holds 8000 to 10,000 intact clay tablets and about 11,000 fragmented tablets. They have survived the passage of time because of the fire set at the Persepolis by Alexander when he seized this ancient ceremonial palace compound. In fact, they had been baked in fire. Find out about them more here!

In addition to these findings, we have found out, based on the decoded information from the texts on the tablets containing seal impressions, some administrative offices existed then.

The Fate of Achaemenids Clay Tablets

In 2006, Blanche M. Manning, a Senior Court Judge, ruled that Iran had been the supporting country behind the bomb blast injuring a group of people in Jerusalem in 1997. Therefore, those people could seize the 300 clay tablets, Iranians’ cultural heritage, kept by the Oriental Institute of Chicago University.

As the Iranian officials objected to the verdict, the court was supposed to re-examine the case on December 2006. As the court believed Iran had not provided all the documents required, the trial session was postponed to January 19, 2007, in which no verdict was issued.

Meanwhile, the Museum of London confirmed its support for the return of the clay tablets collection to Iran as the owner of the artifacts.

In February 2018, a US Supreme Court order prevented the seizure of Persian antiquities. Since then, Iran has initiated the processes to bring back the relics home.

While Americans prefer to deliver the Achaemenid clay tablets to Iran in the U.S, Iran is trying to receive them in The Hague. The country hopes to take all its 2500-year-old heritage back home as soon as possible.

Biased Media Leads to Misinformation about Iran Tourism, An Example

Iran on the Silk Road, Ancient Network of Trade Routes