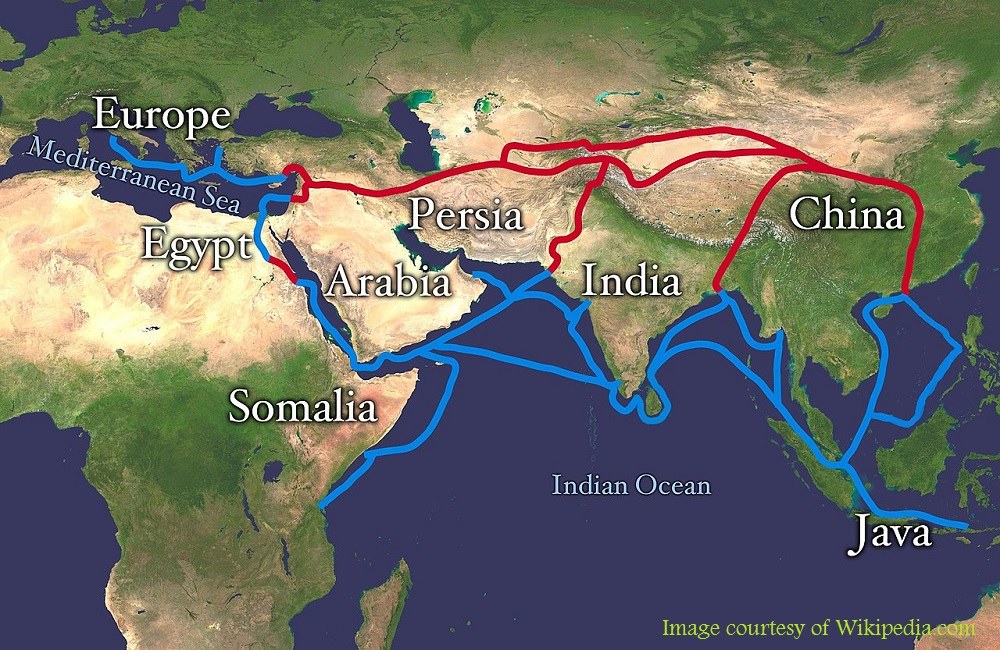 The Silk Road is a well-connected and carefully-organized network of roads which used to connect the East, West and South Asia creating a route. We have known such a route as “the silk road” from the ancient times as it started from the Far East where China sold its silk.

When the Westerners found out there were some people who had transferred culture, civilization and new goods and products through this route from the Eastern to the Western regions, they named it “the Silk Road”. Today, we have discovered that the history of the Silk Route dates back to about 1700 years ago.

Where did the Silk Road Start and End?

According to the ancient maps, the Silk Road started from Huang City in China, and continued to Turkestan. Then, the route passed through central Asia and reached Samarqand and Bukhara. When it entered Iran, it passed the northern part of Iran including Merv, Sarakhs, Nishapur, Gorgan, Baam, Safiabad, Ray, Qazvin, Zanjan and north of Hamadan, and ended up in one of the harbors of Syria after passing Yerevan.

Silk was the main product people traded through this ancient route. Although Iranians were the producers of silk themselves, they also imported a large amount of silk from China through the Silk Road among many other products. Silk import resulted in the exchange of Iranian products which led to Iranian exports. In ancient times, the trade of different countries had been boomed through the Silk Road.

The Silk Road’s flourishing time was during the Sasanian era. As a matter of fact, the Sasanian Empire had gained their main wealth by exchanging products for silk through the Silk Road. Traders imported and exported many different types of products including various types of carpets, precious stones and gems, fabrics, spices, and all kinds of high-consumption products via this ancient route. It was very important for the Sassanian Empire to receive customs duties and taxes from caravans because it was the largest source of income for them.

According to ancient books and the accounts of the stories told about the Silk Road, the Byzantine Empire and the Romans have tried greatly to boost their trading and enhance their Empire. For the exchange of products through the Silk Road, many wars and battles happened between the Iranians and the Romans. The Byzantine Empire had always tried to eliminate its dependency on Iranians so that it could exchange significant amounts of gold and precious stones through the Silk Road.

Some Empires decided to increase their trades with China through the Silk Road. Therefore, they tried to import the silk directly from China by using Ethiopian trading ships through the Indian Ocean. Meanwhile, the Iranians could close the routes of ships in Yemen, Red Sea and the Indian Ocean. As a result, all the Western efforts, especially the Byzantine Empire’s, to bring the Silk Road under the control completely failed.

The Role of Iran in the Business Boom through This Route

In ancient times, many governments competed with each other in having the upper hand in determining the price of commodities. Therefore, it was highly vital for the governments to make policies to dominate the sea and land routes in order to achieve such goals.
And the Silk Road was no exception. China was the center of producing silk since ancient times. This product was one of the most profit-making items imported from the East. In fact, the economy had thrived and developed in the East by producing silk. In ancient times, the people in the East sent silk to different regions in different ways. The military victories of Dariush and Xerxes, The Achaemenian emperors, paved the way for the Silk Route to emerge and silk business thrive.

When the business relationship was established between Iran and India, the East and Central Asia exchanged several expensive goods through this ancient route. Then, the Silk Road extended to the Mediterranean Sea gradually. Nevertheless, the highest economic boost in the Silk Road happened during the Sassanian era.

Despite the fact that trade had thrived in ancient times through the Silk Route and many merchants could gain reputation, this flourishing business did not last forever. As the centuries passed by, the use of this ancient and economical road gradually decreased, and today nothing is left from it except for a name.

Many factors were involved in the decline of the Silk Road. When new technologies emerged, people started producing certain goods like those previously imported through the Silk Route. As a consequence, several businesses began to vanish gradually. Technological progress in transportation innovations led to the building of more affordable vehicles which had significantly diminished the role of the Silk Road.

Little by little, some traders introduced valuable new products such as tea that turned to be the main rival for silk and slowed down its economic boom. On the other hand, another reason for the Silk Road to lose its popularity was the rapid progress in transportation systems. In particular, the railway industry managed to connect large parts of the former Soviet Union to each other.

Other reasons for the Silk Road’s disappearance were the lack of security, ups and downs in countries’ policies, wars, and bandits.

Regardless of what I have mentioned about the decline of the Silk Road as an ancient trading route, many countries consider this route as an attractive route for international tourists. For example, China has extensive tourism development plans to revitalize this ancient route.

Iran, which has been a long-standing business power on this route, can take similar action. Iran has got strong potentials to attract international tourists. The witness to this claim can be sought in the ancient network of Iran’s routes and caravansaries with natural breathtaking landscapes that are reminiscent of ancient times. Also, the last but not least is the hospitality of the Iranian people, which is now well-known throughout the world.

You can also check out our Iran Silk Road Tour and travel with us!