Most of the world travelers find this city a very fascinating one. Shahroud tourist attractions are beyond what one may imagine. Shahroud is in a particular geographical area which one could call a paradise for nature lovers. Therefore, you will enjoy discovering Shahroud natural attractions.

In addition to deserts, mountains, waterfalls, rivers, springs and lush forests, the city includes historical attractions like ancient monuments, religious buildings, and old mosques. Shahroud is also well-known as the city of mystics.

The city has got a border with Golestan Province at the north, with Isfahan and Yazd at the south, with Razavi Khorasan Province and Meyami County at the east, and with Damqan at the west.

The central and the eastern part of this county have a temperate climate and the northern areas are mountainous and have a cold and humid climate. The southern part, located near the desert, has relatively warm weather, with an average annual temperature of 14°C and an average annual rainfall of 180 mm.

The city, located in the northeast of Iran, has an altitude of 1,380 meters above sea level. In general, Shahroud has pleasant weather in the summer and cold in the winter.

It is such a climate that has created Shahroud natural attractions.

Shahroud County is located 390 kilometers from Tehran. Access to the city is possible through airport, train, interurban buses and personal cars.

Shahroud has an international airport. Access to the city is also available through passenger trains. A train trip to this city takes 5-6 hours.

Population and Economy of Shahroud

Here the main source of income is from its gardens. Apricot gardens surround the entire city of Shahroud and because of its climate diversity, fruit production is very high in Shahroud. Therefore, it is possible to produce and grow apples, grapes, dates, and pistachios in different parts of the County.

Among the other special privileges of the area, we can mention the diversity of minerals due to the specific location of Shahroud. Currently, Shahroud has several active mines, such as coal. Other important mines of the county include chromite, copper, limestone, gypsum and decorative stones.

In the Avestan country divisions made during the ancient times, Shahroud and Bastam were two of the major cities of the 14th historical provinces out of 16. Aryans have built the city. They constructed the core of the city on the low hills of the northern and western foothills of the largest river of the area in order to defend its inhabitants from any invasion.

Shahroud gradually grew and developed as security increased. According to many researchers, it became one of the significant cities of the Parthian Empire as the ancient city of Hecatompylos, (Today’s Damqan city), the capital of the Parthians, developed.

The third sacred fire of Ahuramazda, mentioned in Avesta, is Azar Farnbagh that is the great fire temple of Shahroud.

At later periods, Shahroud, along with Damqan, were among the most substantial cities of the historical city of Qumis. The archaeological evidence shows that the current city of Shahroud was in the way of caravans crossing from the western part of the Silk Route to the eastern side.

After Fath Ali Shah, the Qajar king of the 19th century, the city’s prospered considerably. Due to its unique climate, some call Shahroud a small continent.

Here’s the list of the fascinating places to visit inside Shahroud:

This traditional house is now the office of Shahroud Cultural and Tourism Heritage Organization. The house of Yaqmai’ha is the only house in the city that has windcatchers. “Professor Mahdi Heidarian”, an architect from the city of Yazd, built this historic monument in 1926.

The museum used to be the municipality and the governorate of the city. However, it has been renovated later and used as a museum now. In Shahroud Museum, you can watch the discovered historical objects, such as the figurine of different animals, the hilt made of deer bone, bone-made needles and pins as well as many other ancient objects.

Aqa Mosque of Shahroud
Aqa Mosque, located inside the city, is one of Sahroud’s historical attractions dated back to the Qajar period. The mosque consists of an entrance portal, courtyard, Eyvan, numerous Shabestans, old water reservoir, cells and service buildings.

Water Museum of Shahroud
This museum, opened in 2013, is the first museum dedicated to water in Iran. In the museum, there are inventions and productions related to the water, from the oldest ones to the newest. The building’s age is unknown.

This mosque is the historical attractions of Shahroud in the city, dating back to the Ilkhanid period. At the main building of the mosque, many changes have taken place in the current period, and there is almost nothing remained from the original building.

Here’s the list of interesting places to visit outside Shahroud:

This caravansary complex is one of Shahroud’s tourist attractions that is worth the drive.

Reza Abad-e Kharturan
The inhabitants of Reza Abad village are mostly nomads. Reza Abad is a village of Biarjomand District of Shahrud. It is located 250 kilometers southwest of Shahrud and 123 kilometers south of Biarjomand District. The most important tourist attractions of this region are the sand dunes in various forms, black tents of nomads and the designs of nomad women on woven products.

This beautiful village with its special and stepped architecture has got a reputation of being the “Massouleh of Iran Desert”. The waterfall of this village, with its spectacular view, is located 35 km northwest of Shahroud in a beautiful area dedicated to the entertainment of the villagers and tourists.

Some people call the city the Red Jewel of East Alborz foothills because the soil of lands and highlands has a red color. According to an ancient tradition, the local women redecorate and restore the facade of their houses by using the red slurry.

Qatri
This region is located in Bastam District of Shahrud County, near Abr Village. The area has a favorable annual rainfall, and because of its moderate and relatively humid climate, its vegetation is beautiful and impressive. The shrine of Imamzadeh Saravin Qatri has added to the natural-religious tourism of this region.

This village is adjacent to the Khar Turan National Park. As the village has a whole landscape of the “Beyarjomand Plain” and has got several beautiful old plane trees and qanat lines, it is best known as the “Green Jewel of Turan”. The architecture of Qaleh-ye Bala Village is also a stepped one like Mojen village.

Here’s the list of beautiful spots in Shahroud’s nature:

This forest is one of the most authentic and ancient forests of Iran. As an ocean of clouds surrounds the forest most of the time, people call it “Clouds Forest”. The forest has also the world’s oldest living organisms of 3,300,000 years ago, known as Hyrcanian Forests. With its rare plants and animal species, it is one of the most beautiful and unique forests of Iran.

Among Iranians who travel extensively inside their country, this is one of Shahroud tourist attractions they do not want to miss.

Dasht-e Shad Forest
The forest is another natural attraction of Shahroud located 180 kilometers northeast of Shahrud. The diversity of forest species, beautiful nature and landscape are the famous features of Dasht-e Shad Forest.

Nam Nick Forest and Waterfall
This is another natural attraction of Shahroud. Nam Nick and Hossein Abad Forests, with their particular landscape, are located in the territory of Shahrud and in the northern drainage of the province. 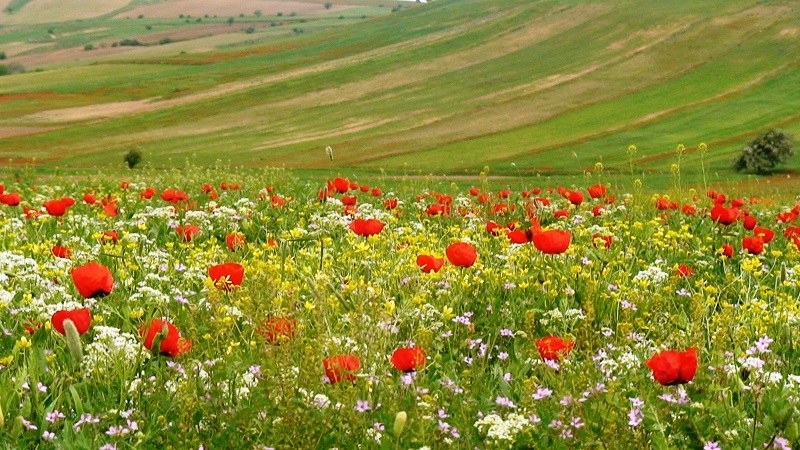 In this region, the poppy flowers grow from mid-May to mid-June. In addition, the sunflowers of Danial Plain give a beautiful landscape to the area in August and September. The impressive attract many tourists to the region.

Haft Rang Spring of Mojen
This spectacular spring is among the unique springs of Iran. It is located 25 kilometers north of Shahroud. The beautiful Haft Rang Spring (meaning seven color spring) on the crust and the floor of the river makes a picturesque image by creating the navy blue, blue, turquoise, orange, silver and brown colors. This natural attraction of Shahroud grasps the attention of any visitors coming to this area.

This is a well-known national park of Iran, which has got the reputation of the “Africa of Iran”. The park includes pristine nature and beautiful landscapes. After “Naybandan Wildlife Refuge” in Tabas, Khar Turan National Park is the second-largest refuge of Iran.

In terms of vegetation, this area has a high diversity. Among its animals, there some of the rare species, such as Asiatic cheetahs, Persian zebra, and birds like Persian ground jays and bustards.

Khosh Yeylaq
Located northeast of Shahrud, Khosh Yeylaq is a unique Iranian wildlife sanctuary. This is due to the different natural landscapes and diversity of ecosystems, including forests, mountains, Caspian humid weather, dry plains, desert, and its particular and valuable biodiversity. 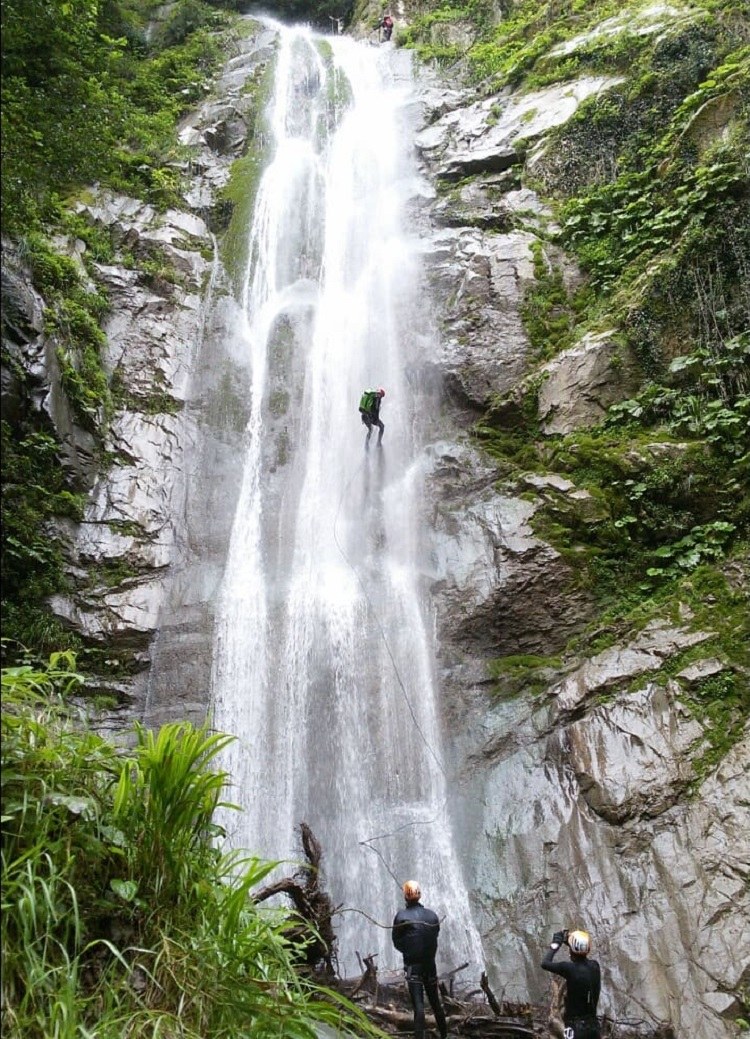 The gorge is located 10 kilometers from Mojen City and has a famous waterfall located within the Strait. This area has a variety of vegetation and animals and the climate is very favorable.

Sunflower and Poppy Plains of Kalpoosh
The Sunflower Plain is one of the unique and beautiful tourist attractions of Shahroud. The best time to visit the Plain of Kalpoosh is in the month of September when you can see the glorious and delightful view of the millions of sunflowers flourished in this plain.

The Poppy Plain is another beautiful and spectacular attraction of Shahroud. In the spring, the area is full of beautiful poppy flowers that create a beautiful landscape with its lush greenery fields.

Again, the Iranians who love to explore Shahroud natural attractions, this is a major part of the country to explore.

Nekarman is a village near Shahroud with a pleasant climate, located about 25 km away from the city. There is a small and beautiful fall in this village. You do not need any technical equipment to visit the fall and it is easily accessible for all visitors.

Avesta Fall and Icicle
These natural attractions of Shahroud County are located in Abarsaj, 15 km north of Shahroud city. The best time to visit this waterfall is the winter when the whiteness of the snow offers a beautiful landscape to the waterfall. The special features of this region are very rare in the country.