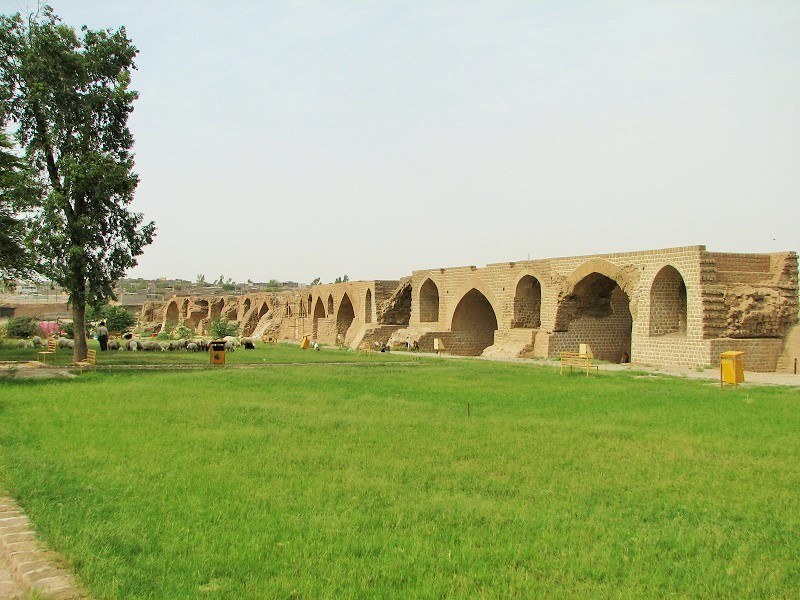 Since a long time ago, there have been many ways for travelers and caravans to travel to Iran. So, Iranians have built hundreds of bridges on the rivers and valleys throughout history because of the topographic and natural features to facilitate the transit. Some of the Iranian historical bridges are still in use while many of them have been destroyed.

Archeological researches show that bridge construction was common in Iran before the Achaemenid era. The tablets found in Susa (Elam civilization) and Babylon (the Mesopotamian civilizations) and the signs remained from the Median period prove the existence of bridges over Karkheh (Elam), Tigris and Euphrates (the Mesopotamia) and the rivers of the Zagros Mountains (Media).

We can mention the Babylon Bridge on the Euphrates River (in the Bakhtr al-Nasr era) as one of these bridges. In addition, the oldest archeological bridge is over the Aras River (Urartu period). There is also a famous ancient bridge over Kor River (Cyrus River) in Doroudzan District of Fars Province, built and used before as a dam.

Here are the names of some of the most famous bridges remained in Iran since ancient times: 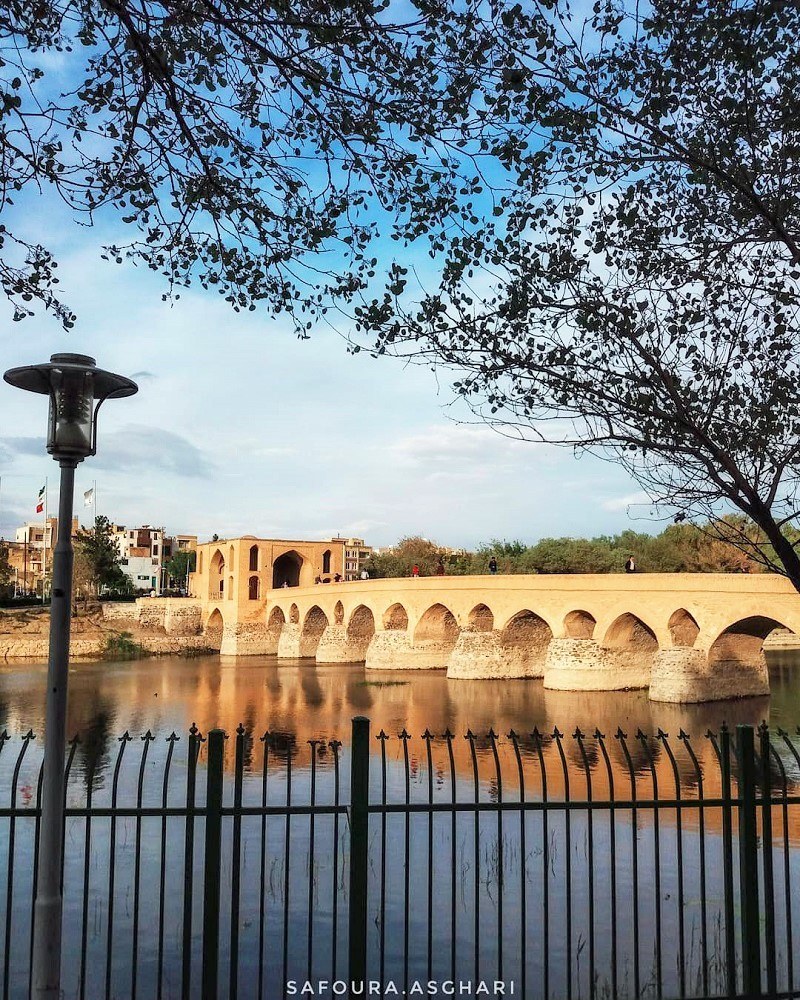 This bridge dates back to the Sassanid and pre-Islamic eras. It is built 4 kilometers east of Isfahan, on Zayandehrood River. In the springs of this bridge, there are small beautiful arches. Jey Bridge is still in perfect condition, persistent and usable.

This bridge is the oldest bridge built on Zayandehrood. Iranians have repaired it several times throughout history, especially in the early post-Islam centuries. The materials used in this bridge are brick and mortar. The bridge is 105 meters long and 5 meters wide. 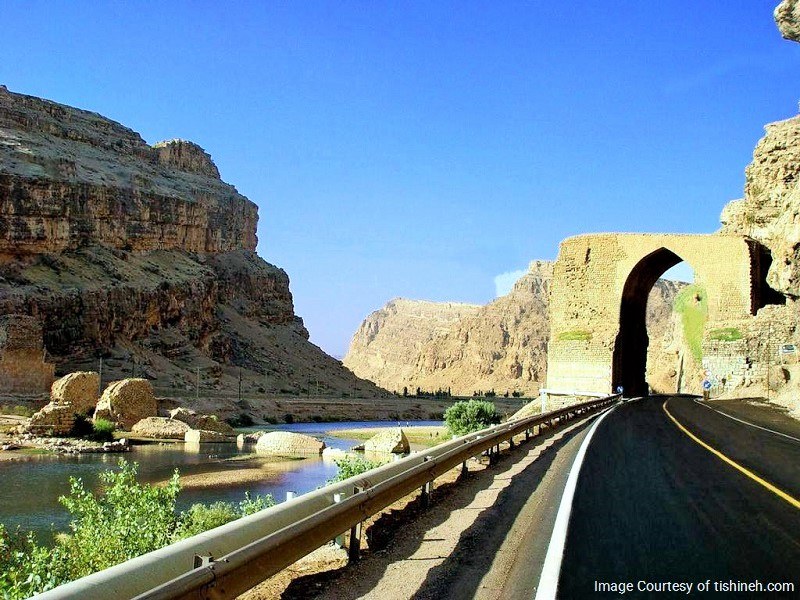 This historical bridge of Iran is located at the beginning of Pol Dokhtar Road in Khorramabad and at the entrance of Pol Dokhtar City. Currently, only a few spring arches have remained on the east and west. The bridge dates back to the Sassanid period.

The bridge is extended from east to west and has a length of 270 meters. Its wide and thick base is made of stone. The vault is 18 meters above the asphalt surface and is approximately 30 meters above the river water. The width of the river is 11.5 meters. 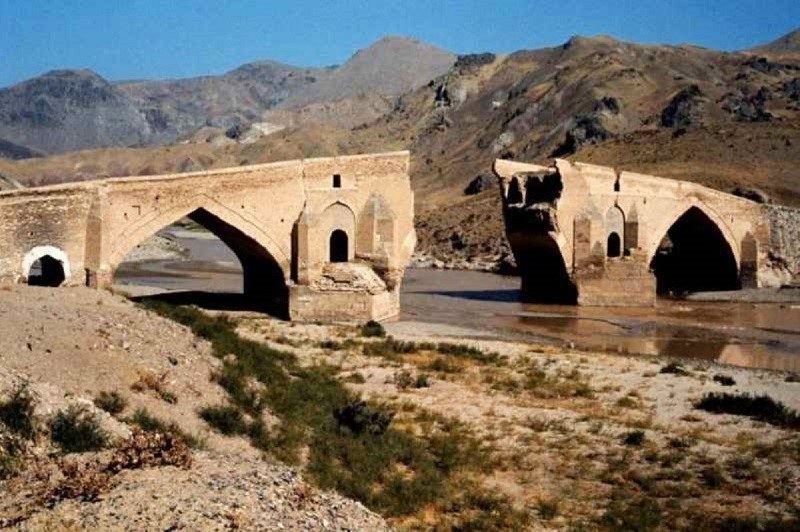 The bridge is located 20 kilometers southeast of Mianeh City. The construction of Qafelankooh Bridge dates back to about six hundred years ago, during the reign of the Timurid dynasty and before the Safavid era.

This historical bridge has got a large opening and two small openings on either side. Madame Dieulafoy traveled to Iran during the Qajar period and wrote about this bridge in her travelogue. 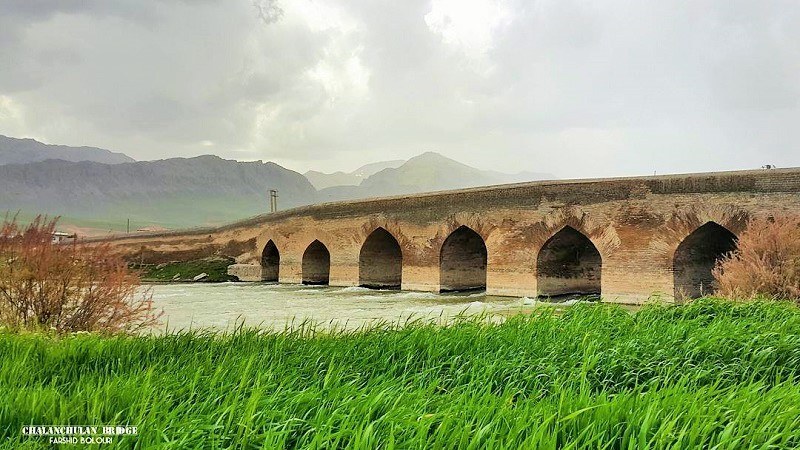 This bridge is located in Silakhor Plain on the old route leading from Boroujerd City to Khuzestan and Isfahan cities. The bridge dates back to the Safavid era, but its foundation relates to the Sassanid period, like several other Iranian historical bridges. The bridge is 120 meters long with six brick arch in the spring. The bottom one meter of its bases are made of stone and the main body is made of brick. 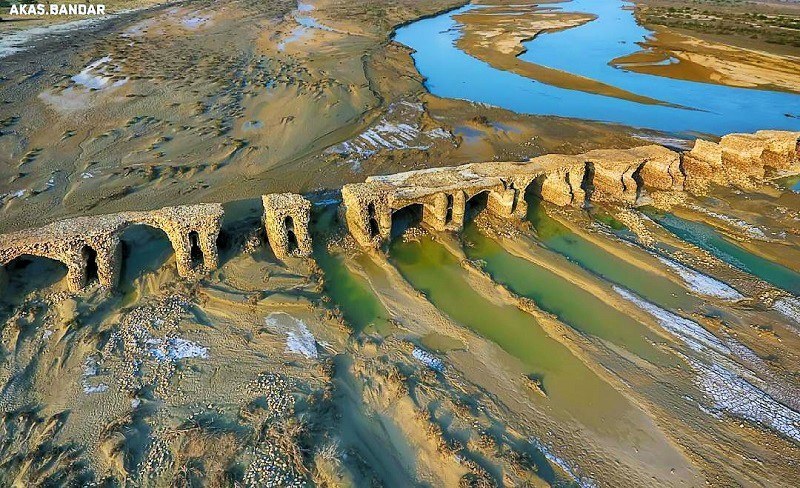 Latidan is the longest Iranian historical bridge that remained in Iran. It is located in Hormozgan Province, 50 km west of Bandar AbbasBandar Abbas, on Kol River. With a length of 800 meters, Latidan Bridge is a very long bridge.

Today, many parts of the bridge have been demolished. Only 270 meters of its western part and 150 meters of its eastern part has remained. The width of Latidan Bridge varies due to its length in different sections. 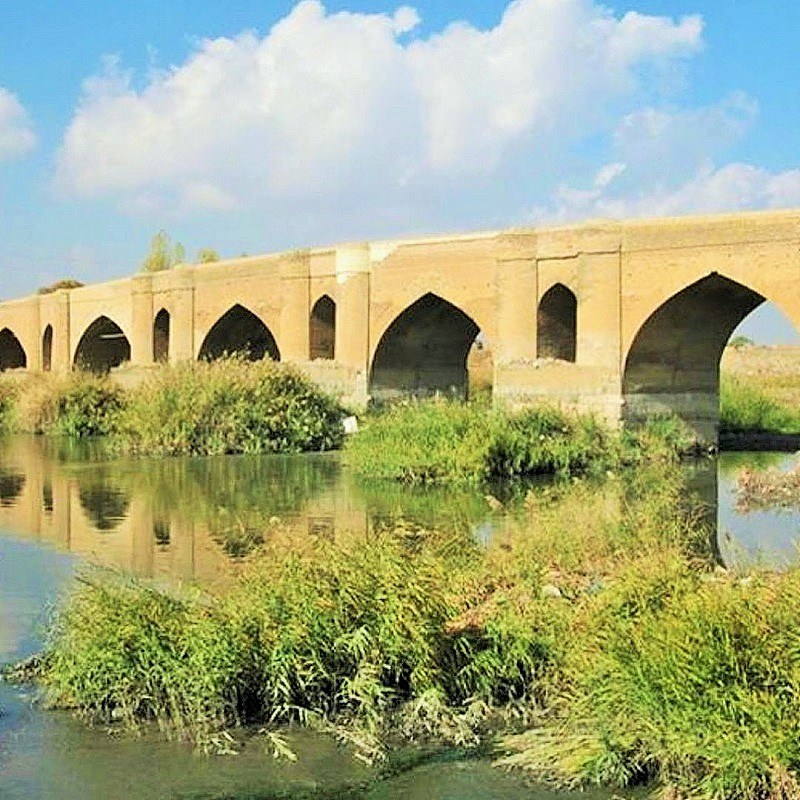 This bridge is located east of Kermanshah on the Qareh Su River. The bridge has played an important role in the relationship between Iran, Mesopotamia, and modern Iraq since a long time ago. Most of the caravans traveling from Iran to Karbala, Najaf, Kadhimiya, Samarra, and other Iraqi cities crossed Kohneh Bridge. The construction of the bridge dates back to the Safavid period while its foundation relates to the Sassanid and Seljuk eras.

This historical bridge of Iran is located in Isfahan, on Khajou Street. The bridge had a dual purpose and could be used as a dam if needed. One of the Safavid kings ordered the construction of a small mansion in the middle of this bridge for himself and his family. This makes Khajou one of the unique Iranian historical bridges. Khaju Bridge is 150 meters long and 14 meters wide, which makes it one of the longest bridges in Iran. 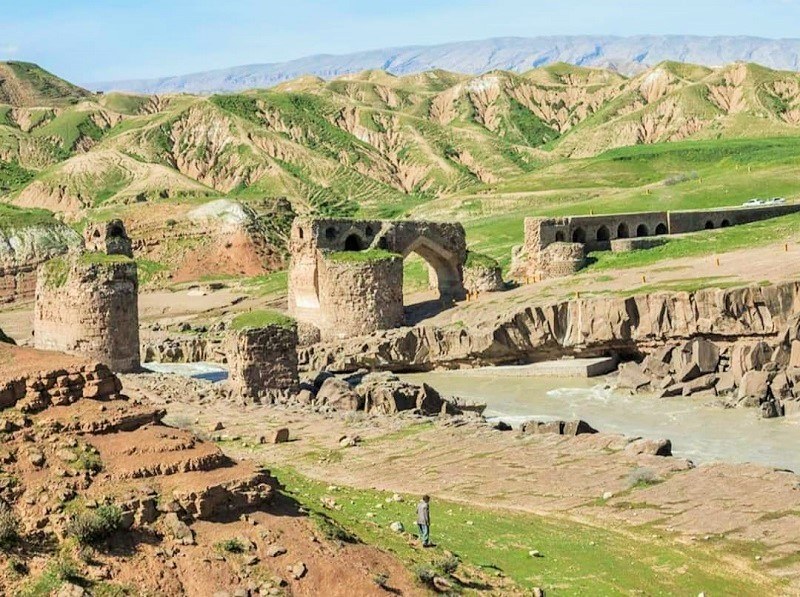 The bridge is 30 kilometers from Pol Dokhtar City. The bridge was 168 meters long and 8 meters wide. There are now six springs, relatively in good condition, remained on Gavmishan Bridge. Iranians restored the bridge in the Safavid and Qajar periods. However, the construction of Gavmishan Bridge belongs to the Sassanid period.

An interesting point in the construction of this bridge is that its bases are on a rocky bed, on both sides of the river. This minimizes the contact of the base with the water pressure and the moisture. 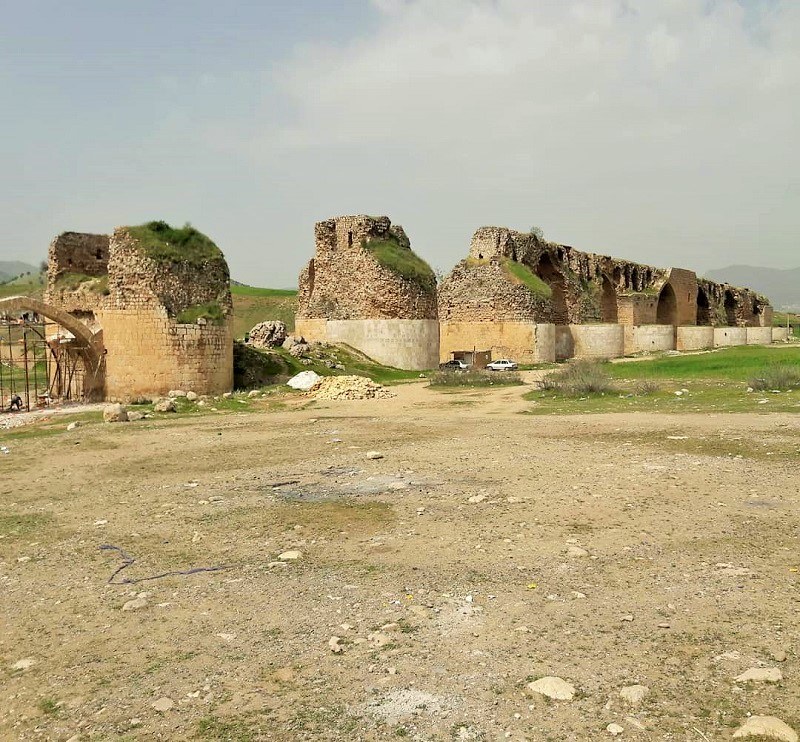 This historical bridge is located on Khorramabad to Kuhdasht Road, 40 kilometers from Kuhdasht. The bridge has 12 large springs and one small spring at the western end of the bridge. The diameters of the bases are very large, and there are roofed chambers between the bases and the arch of the springs. In the construction of the base, the architects have formed the ellipse cut to facilitate water passage. The bridge dates back to the Sassanid period.

This old bridge is probably the most famous bridge in Iran. This bridge is located in Isfahan. It is also known as Allahverdi Khan Bridge, Chahar Baq Bridge, Si-o-se-Cheshmeh Bridge, and Jolfa Bridge. This bridge belongs to the Safavid era. Si-o-Se-Pol Bridge is about 300 meters long and 14 meters wide. It is located over Zayandehrood River, along with 33 springs.

In addition to the most famous Iranian historical bridges introduced above, there are some similar structures in various parts of Iran. Here’s a list of some of them:

When Is the Best Time to Visit Iran?