Qom is an ancient city with a rich history providing several tourist attractions. It is the second destination of religious tourism in Iran due to the presence of the shrine of Fatemeh Masoumeh. In addition, there are incredible natural attractions outside Qom.

The most popular souvenir of Qom is Sohan, a traditional Persian saffron brittle toffee. In addition, this city produces very beautiful handicrafts. Many historical books consider Qom the cradle of Islamic knowledge and studies.

The city of Qom was originally called Mamjan and accommodated Zoroastrian inhabitants. This city is on the north-south transportation highway of Iran. On the one hand, it is a connecting point between Tehran and other industrial provinces of Iran. On the other hand, it links the southern provinces and cities of Iran to the northern ones. This is not the only geographical significance of Qom. In the past, it had a vital position on the route of the Silk Road as well.

Qom is located in the south of Tehran Province, north of Isfahan Province, east of Markazi Province and west of Semnan Province. The city is in a dry and semi-arid region and has warm and dry weather. The eastern, central and northern regions of the province are also full of vast deserts, the largest of which is Massileh Plain. This city is 928 meters above sea level.

The average of the highest temperature is 37ᵒC and the lowest is -2ᵒC. The average rainfall in Qom is 105 ml per year.

For traveling to Qom, you have two options:

Qom is constructing its international airport nowadays. The monorail route from Tehran to Qom is also under construction.

Population and Economy of Qom

According to the 2016 Iranian census, this city has about 1,300,000 people. The economy of Qom depends on agriculture, production of silk carpets, and tourism businesses providing services for religious sites’ visitors and pilgrims.

Qom Province has many mineral resources variety. The construction stones, salt, gypsum, natural gas, and petroleum are the most important mines and natural reserves in the province.

Different handicraft workshops form the economy of Qom. They include:

An important event in the early centuries of the post-Islam era in Qom is the migration and refuge of many Alavids into this city and the spread of the Imamate denomination of Shiism among the local people. This led Qom to gradually become a great center of Shiism in the world.

During the Pahlavi era, this city was a strong platform for the religious struggle against the regime. This city played a pivotal role in Iran during the 1979 Islamic Revolution.

The daughter of the 7th Imam of Shiites, Fatemeh Masoumeh, has been buried in this shrine. Her burial place is known today as the Holy Shrine of Hazrat-e Masoumeh. There are beautiful buildings built around it in the course of history.

The shrine location is in the city center today. Iranians built the shrine in a very simple way in the 9th century. It was developed since the 18th century, during the reign of Fat’h Ali Shah Qajar. The architects renovated it in many years.

Aqa Mosque and School of Qom
Aqa Mosque and School are located in Gozar Qal’eh Alley, near Tekiyeh-ye Chahar Mardan District. The construction of this building dates back to approximately 1902. The mosque building consists of a 10 × 30 meters Shabestan with 16 covering arches (Taq-e Cheshmehpoosh) constructed on the cylindrical stone columns.

An Islamic interpreter and narrator of Hadith constructed the Friday Mosque of Qom in the 19th century. Iranians renovated the mosque many times over the years. It is a symbol of the architecture of different periods.

Qom’s Azam Mosque, famous for Ayatollah Boroujerdi Mosque, is a great mosque near the shrine of Fatemeh Masoumeh, built in 1958 by the effort of Ayatollah Seyyed Hossein Tabatabai Borujerdi. Azam Mosque of Qom is a mosque with three eyvans around its courtyard.

Qiyasiyeh School of Qom
From the entire building of this school, there has remained only a portal. However, by watching the magnitude of this portal, it is possible to speculate that the construction of school dates back to the 13th century.

Imamzadeh Hamzeh
You can see the strangest dome ever seen in the Iranian monuments in the building of Imamzadeh Hamzeh. The shell-shaped dome consisting of a combination of a dome and a cone-shaped form is an art of the early 19th century architects.

This school is located near the holy shrine of Fatemeh Masoumeh. According to the inscription on the gate-top, the southern eyvan is attributed to Shah Tahmasb, the Safavid king. This two-story building of the school is on a four-eyvan plan.

According to a narration, more than a thousand years ago, on a Tuesday night, the 17th day of Ramadan in 983, Imam Zaman, the 12th Imam of Twelver Shiites talked to a righteous person. In fact, this last Imam of Shiites is believed to be still alive waiting for his time to reappear to the world.

He and his companions appeared to that person and at the place where the mosque is today and ordered him to construct a mosque there through particular rituals. He built the Jamkaran Mosque to carry out the order.

The architects renovated and repaired the Jamkran Mosque during different historical eras. The oldest inscription in this mosque refers to its repair in 1754. Before the Islamic Revolution of Iran, in 1978, the mosque had a small building, but it had experienced huge development after the 1979 Revolution.

Many Shiites go to this mosque on Tuesday nights of each week and the night before the 15th of Shaban in the Islamic calendar, the birthday of Imam Zaman, to ask for his intercession to be forgiven by God.

Jamkaran Castle
The fortress of Jamkaran is located 6 km east of Qom, in Jamkaran Village, east of Qom. This castle, known also as Gabri Castle, is a pre-Islamic monument used also during the post-Islam era.

Sam Abad Castle
This castle is located in the southeast of Qom River, 4-5 km from Qomrud Village. The length and width of the castle are 76 meters. There are four towers in its four corners. The castle has a central courtyard and four eyvans.

Kahak City
The city overlooks the surrounding highlands on three sides. Zeidan Valley is located on its eastern side. Therefore, it has a moderate climate. The shrine of Imam Zadeh Zeinab Khatoon, the house of Mulla Sadra and the famous cave of Kahak are the historical attractions getting the attention of visitors. Mulla Sadra Shirazi, the famous philosopher, had been living in this city for many years and wrote many precious books in this place.

Natural Attractions outside the City

This salt lake is a natural attraction of Qom Province. Namak Lake is part of the salt desert in the east of Qom. It has water only in winter. The scene of salt plates and its harvest beginning in early summer at the southern part of the lake is spectacular.

This natural attraction of Qom, the Jafariyeh Salt Dome, is 20 km northwest of Qom. Salt domes are the geological attractions worth visiting. They are shaped because of geological corrosion and permanent pressure on salt layers.

Veshnaveh Cave
At around 60 km away from Qom on Ardehal Mountain, there are four caves collectively referred to as Veshnaveh Cave. One of the caves has a huge source of water flowing from the gap of the mountain which erupts like a fountain. This cave is one of the most famous natural attractions in Qom Province. 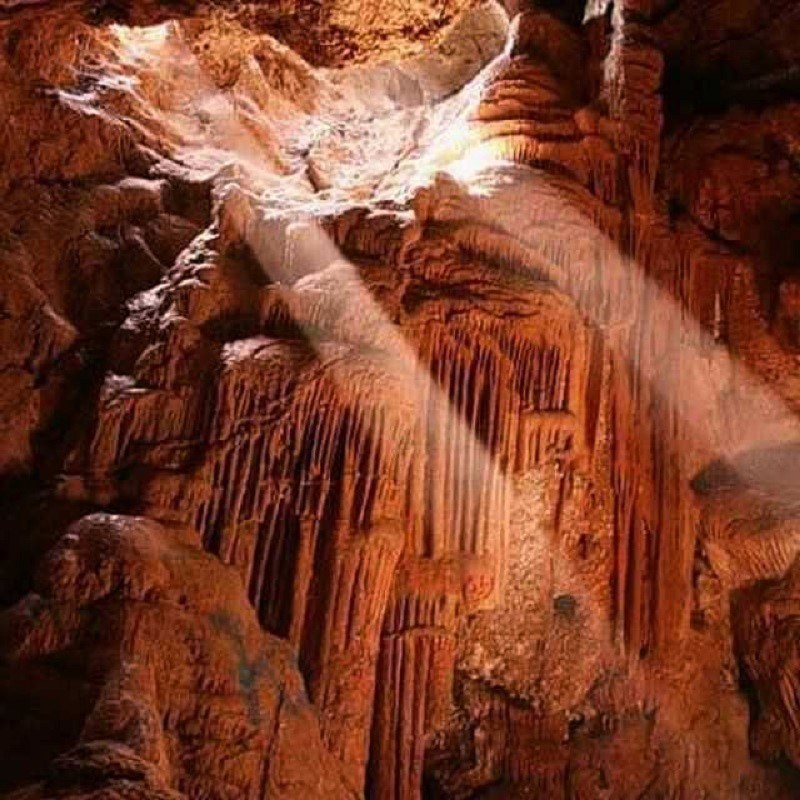 Another famous cave, which is 30 km south of Qom, is called Kahak cave. It is one of the natural and ancient attractions of Qom Province attracting several visitors every year.

With an area of about 330 km2, Howz-e Soltan Lake is also famous as Qom Lake, Shahi Lake, and Saveh Lake. It is located in the north of Qom Province and the northwest of Namak Lake and is stretched in the west-eastern direction.