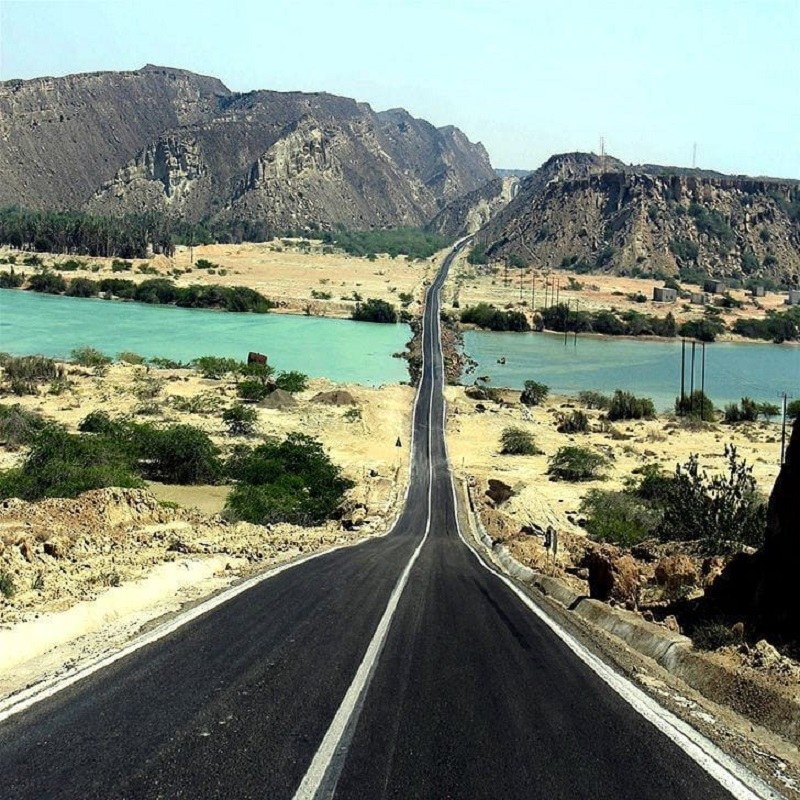 Chabahar is the only oceanic port in Iran, and its weather is often vernal. One of the most interesting tourist attractions of Chabahar is local clothing and folk music of Baluch tribes. Chabahar to Gwadar Road is one of the routes where spectacular sites can be visited: Ramin Village and its wharf, Lipar wetland, or Pink Lagoon, Merikhi (Martian) Mountains or Miniature Mountains, and Beris Beach and Wharf.

Some of the other historical attractions of Chabahar are:
Bahu Kalat or Gandu Village, Konarak City near Chabahar City and Konarak Wharf, Local Bazaar (Lateh Bazaar) and Gelafshan spring of Bandar-e Tang, and Tis ancient village.

Chabahar is a free trade zone and one of the southeastern cities of Sistan and Baluchestan Province in Iran. It is also the only oceanic port of Iran located on the shores of the Makran Sea (Oman Sea) and the Indian Ocean. Its anchorage is capable of berthing ocean liners.

Chabahar Port is the closest way to access the international waters for the landlocked countries of Central Asia (Afghanistan, Turkmenistan, Uzbekistan, Tajikistan, Kyrgyzstan, and Kazakhstan). Chabahr County reaches Iranshahr and Nikshahr counties in the Sistan and Baluchistan Province on the north, Oman Sea on the south, Pakistan on the East, and Kerman and Hormozgan provinces and the West.

The height of Chabahar is 7 meters from the sea level. The average annual temperature is 24°C and the average annual precipitation is 10 mm. It has a temperate, tropical climate with relative humidity.

There are different options for traveling to Chabahar:

The flight distance between Chabahar and Tehran is 1,456 kilometers and it takes about 2 hours. From Chabahar International Airport, there are flights to Dubai, Muscat, Mashhad, Tehran, Shiraz, Bandar Abbas, and Zahedan.

As there are plenty of Chabahar tourist attractions in various realms, many would like to visit this city, but it has remained somewhat unknown to many.

Population and Economy of Chabahar City

According to the 2016 Iranian Population and Housing Census, the population of Chabahar was 106,739 people. The main occupation of local people is sea-related jobs because Chabahr is a free economic zone and it has an active harbor. According to the United Nations, Chabahar is one of the major corridor ways between east and west and it is in the southernmost part of the corridor.

Another part of the Chabahar economy is the industrial free zone including industrial sheds, warehouses, and workshops. Petrochemical and steel industrial towns and major national projects such as Clean Energy Town, automotive, food, fisheries, and other industries are active in this city.

The tourism sector is beginning to flourish in this part of Iran. As Chabahar has got plenty of potentials, it can offer a lot of tourist attractions to its visitors.

The history of Chabahar dates back to 1854, during the Qajar period. Until 1872, the Arabs of Muscat dominated the city and they were trying to seize this critical port. The British army was the border arbiter between Iran and the Kalat Region, which were under its domination, and supported the claims of the Arabs of Muscat to capture Chabahar. To prevent such threats, the Iranian government seized the port of Chabahar in 1251 to expand its power.

In 1925, the Qajar government established its sovereignty over Chabahar. In January 1929, the government consolidated the power of the central government in Chabahar completely. In 1973, the comprehensive plan for launching Chabahar Port began. Since then, the Iranians have completed the projects of this port until today. The first phase of the project was launched in 1989.

Since February 2019, despite US sanctions against Iran, the Iranian government launched the Afghan-Indian trade route from Chabahar.

There are a series of interesting places to visit inside Chabahar such as:

Qadamgah-e Khidr
Muslims respect the prophet Khidr and believe that he is still alive. The local people of Chabahar also believe that Khidr the Prophet cares for their lenj ships, their boats, and the sea. Therefore, local people revere the place that is believed to be his footprint. Therefore, they pray there to vow to distribute votive food to the needy. 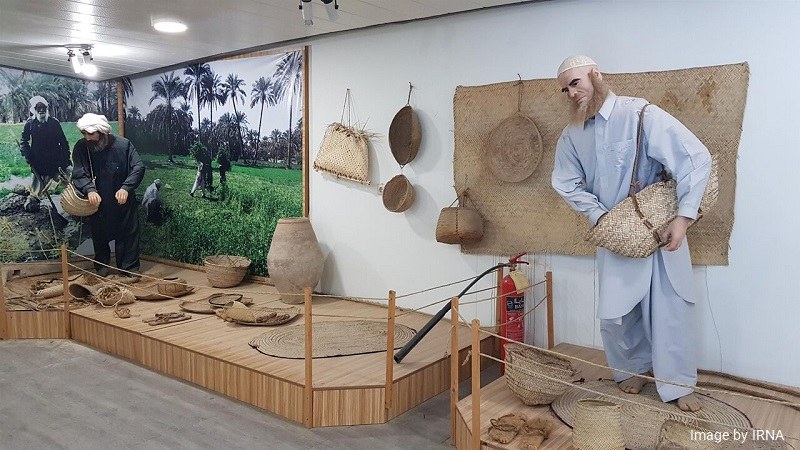 There are also amazing places to visit outside Chabahr such as:

It is located 5 kilometers northwest of Chabahar, dating back to 1064 AD. The main feature of this tomb is the white walls with the Indian architectural style.

Ancient Damb Kooh Site
This ancient site is located 90 kilometers northeast of Chabahar in Bahu Kalat Region, dating back to 4,500 to 5,000 years ago. On this site, the archeologists have found graves in the form of chambers of 1×1, 2×1.5, and 2×2 m dimensions.

Tis Village
This is a historical village of southern Iran and is located 11 km from Chabahar. The village dates back to 2,500 years ago.

Botanical Garden of Chabahar
The garden, located near Tis Village, has an area of about 6 hectares. This is home to various native, non-native, and endangered plant species.

Dashtyari Ancient Cemetery
It dates back to the pre-history era and the Iron Age. The archeologists have unearthed remarkable objects from this cemetery.

Here’s a list of beautiful places in the nature close to this port city: 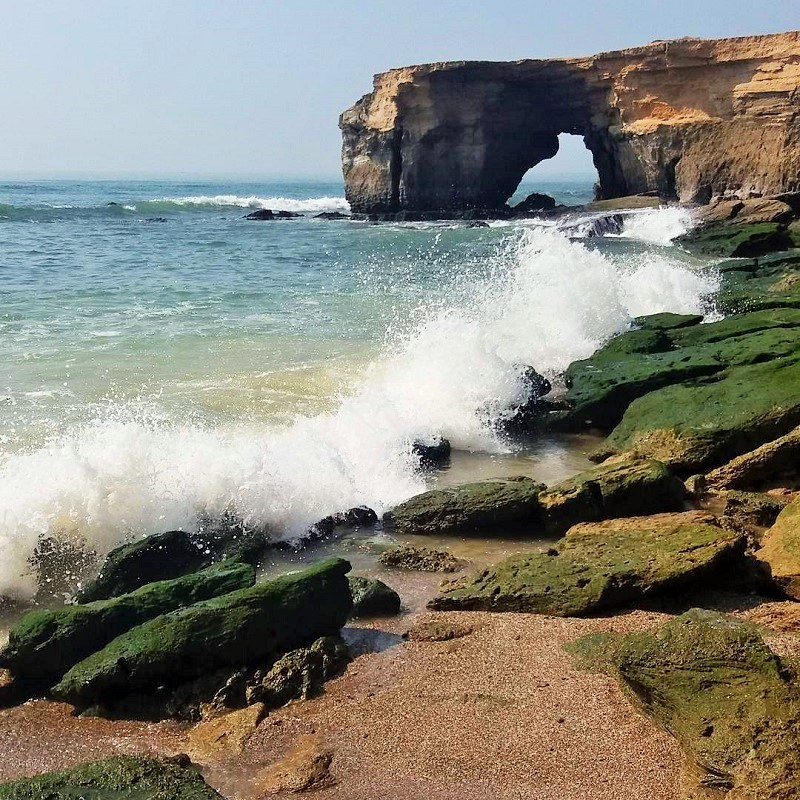 This bay is one of the most beautiful natural bays in Iran. Throughout the bay, there are plenty of fishing launches and boats. Its beach is very suitable for sightseeing. Chabahar Free Zone is located in the east of this bay. 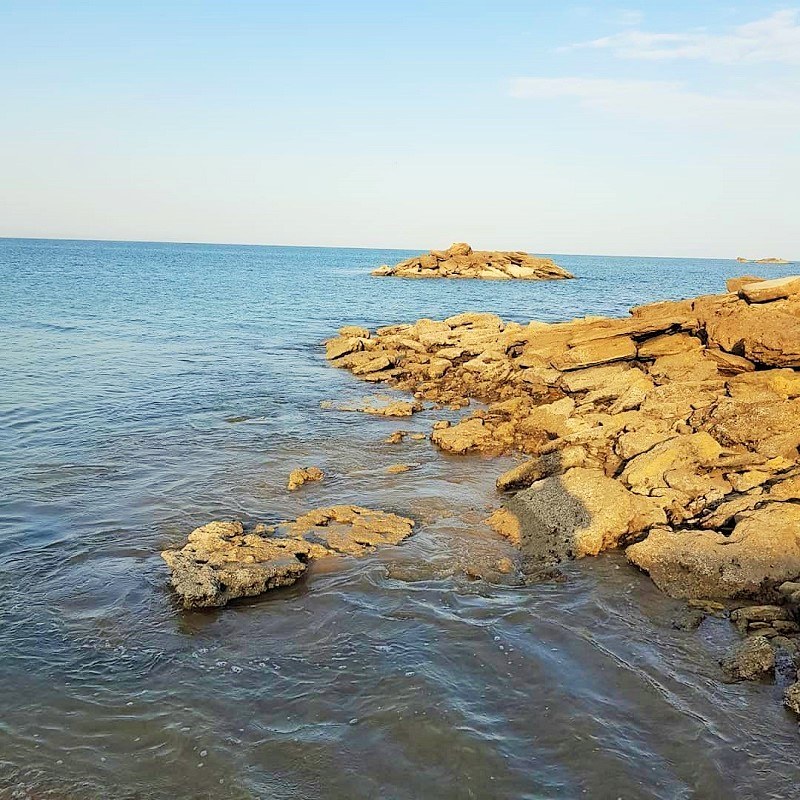 Gwadar Bay is located in the southeastern part of Iran and has unique nature and landscape inducing the atmosphere and the landscape of Mars. This bay is also one of the major centers of shrimp fishing in Chabahar.

Sandy Beaches of Gulf of Oman
The sandy and rocky beaches of the Gulf of Oman are one of the most beautiful natural attractions of Chabahar. The beaches extend on the southern coast of the city and is a suitable place for recreation and sightseeing. 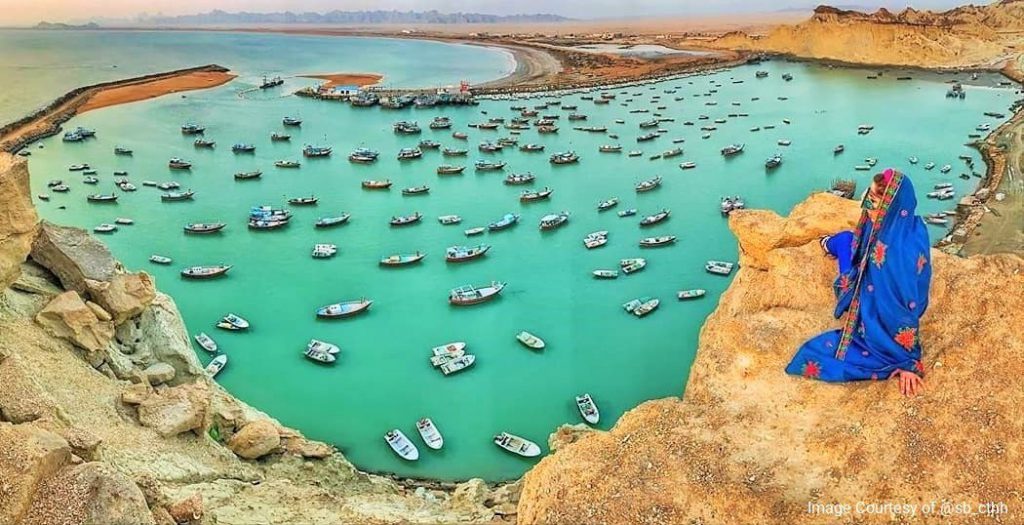 There are several fishing wharves in Chabahar. However, Beris, Tis, and Ramin fishing wharves are more beautiful and spectacular than others, and many tourists go there for photographing and watching fishermen and the colorful boats on the water. 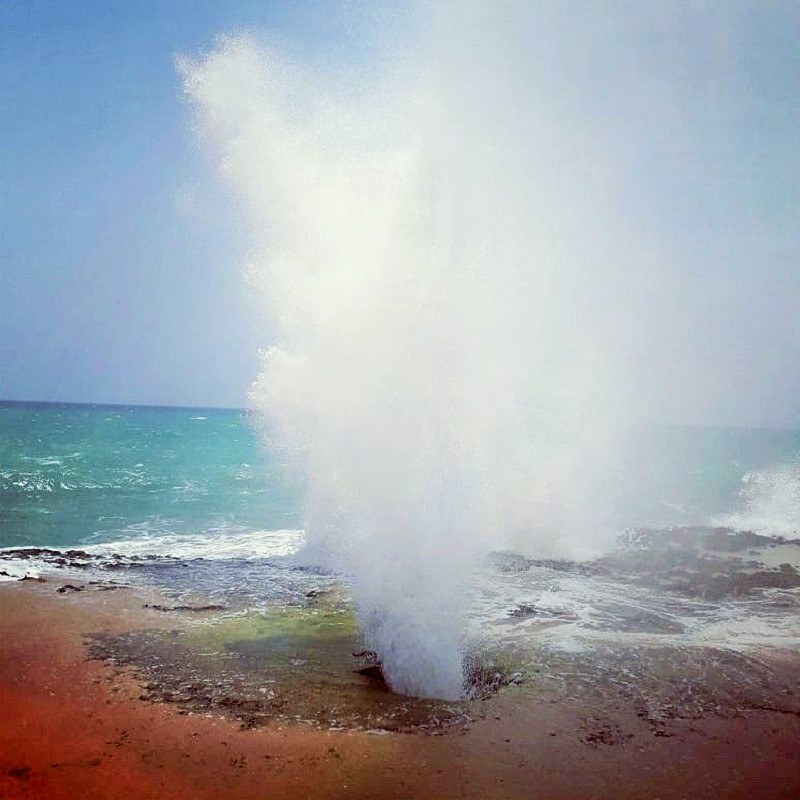 In some parts of the coast of Chabahar, there is a natural phenomenon called “Moj Feshan” which literally means Water Plunjing Wave in Persian. In this phenomenon, the sea waves, sometimes having more than 20 meters high, hit the beach and jet out forcefully out of the holes. This phenomenon occurs during monsoon rains in Chabahar (often in summer) and more on Darya Bozorg Beach (Big Sea Beach) and Chabahar coastal road to Beris. 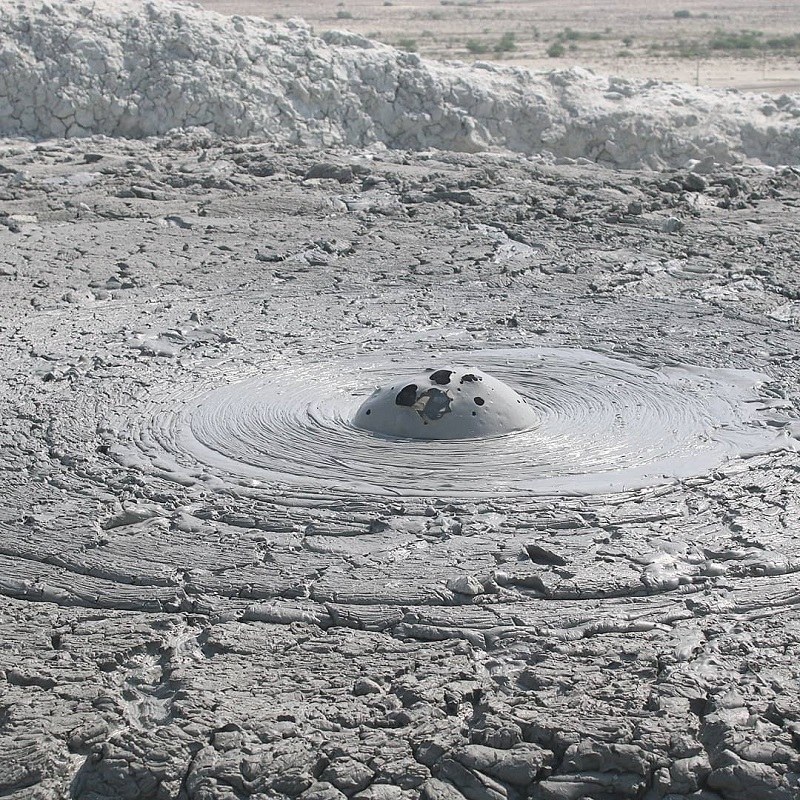 In this phenomenon, the mud flows out of the underground and takes the form of a hill. The volcanic mud of Tang-e Konarak, located 110 km from Chabahar, is the most famous and active volcanic mud plunging spot in Iran. 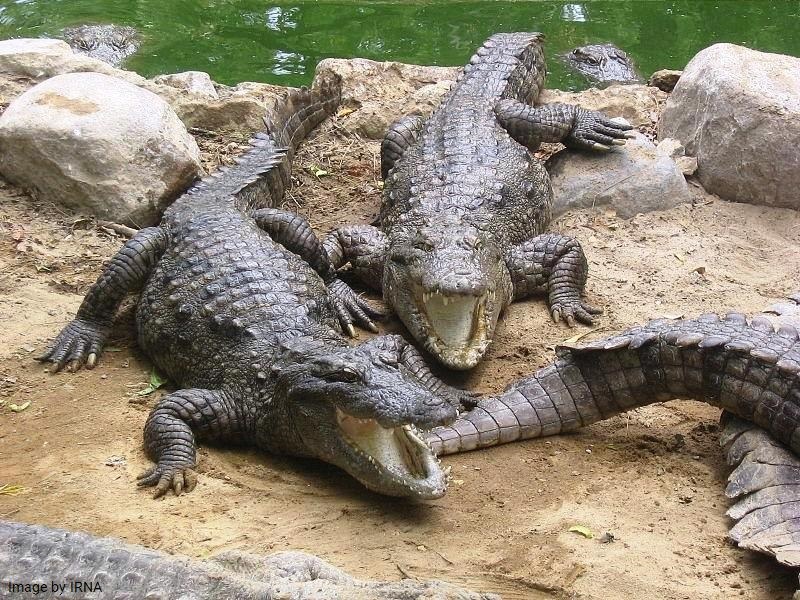 Gandu Area includes Sarbaz and Bahu Kalat, the living area of the mugger crocodile and the coastal lands of the Gulf of Oman.

Wildlife of Chabahar
Due to the attractive plant and animal species such as Baluchi camels, white-tailed eagles, mugger crocodiles, rough-toothed dolphins, sea turtles, tamarisk, and genus trees, karira trees, etc, this part of nature has attracted many visitors. 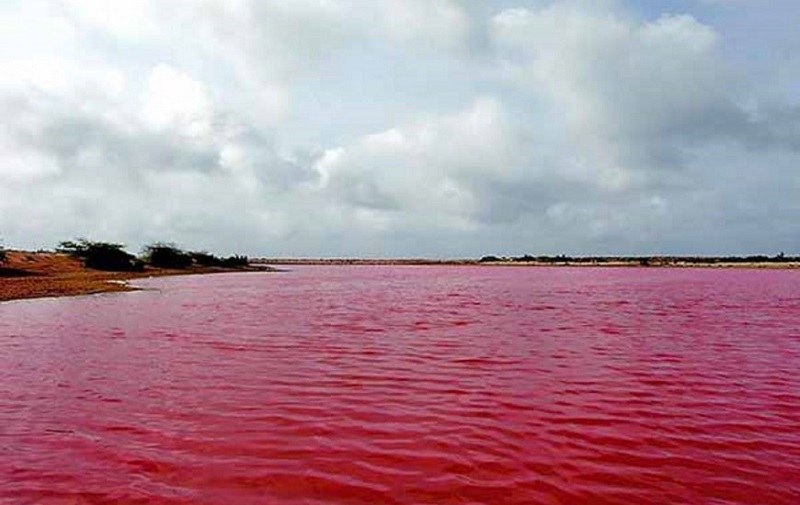 This area is located along the Chabahar coastal road to Gwadar. The color of water in this lake is pink most of the time and occasionally changes into orange or red. One of the main attractions you should not miss during your visit to the lake is to watch different birds such as coots, flamingo, grebes, herons, and western swamp hens, 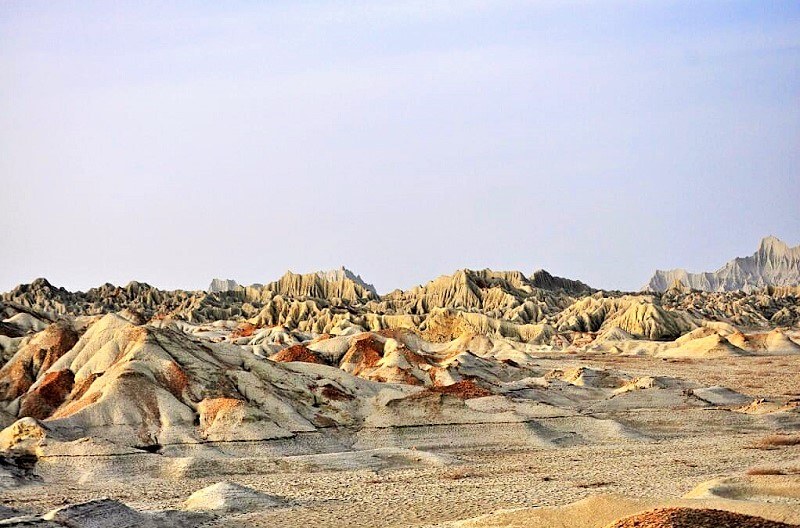 These mountains are the result of a natural phenomenon creating a spectacular and unique landscape. These mountains spread across an area from Kachu Village to Gwadar alongside the sea. 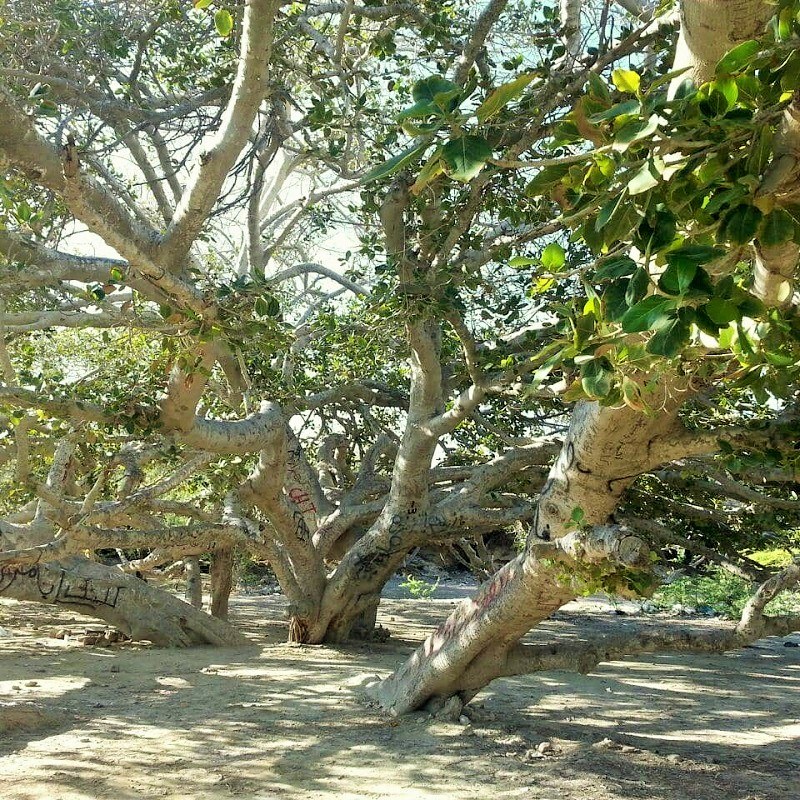 The tree has a strange appearance and it grows on the coastline of Chabahar. It has become the symbol of this region. The sacred fig is famous for its large crown and often lives more than a hundred years.

Satan’s Island
This is the easternmost island of Iran and is made of rocks. The island goes underwater during the daily tides. The local people believe that because of the mysterious sinking of the boats at night, this island is called Satan’s Island (Jazireh-ye Sheitan in Persian).

Hara Forests
Hara Forests or Mangrove Forests include the trees that are rooted in saline water and immersed in it.

Shirkooh (or Sphynx)
This mountain is a unique landscape of the coastline road of Beris and at the beginning of the Merikhi Mountains region. Rain, wind, and soil erosion have caused this mountain to be very similar to the sphynx in Egypt, and it is known as sphynx.

When to Resume Iran Tourism after COVID 19 Pandemic