The city of Natanz is a garden city located at the edge of the desert offering a series of amazing historic and natural attractions. Karkas mountain range has offered to the city a beautiful landscape and a pleasant climate. The famous village of Abyaneh is also nearby.

All the travelers to Natanz enjoy its enjoyable weather, visiting its handmade tiles and glazed pottery workshops among other things. Natanz has got a tremendous number of historic, cultural and natural tourist attractions. Iran National Heritage Organization has inscribed more than 120 sites and heritage sites of them.

Natanz is located 120 km northeast of Isfahan and on the main north-south highway of Iran. It is1666 meters above sea level.

The average temperature of the city is 27°C, and the average rainfall is 19 mm in different seasons.

Natanz does not have an airport, but you can reach the city by car or by bus. Access to Natanz is possible through Kashan-Natanz-Isfahan Route as well as Tehran-South Transit Road.

The distance from Tehran to Natanz is 326 kilometers and about 4 hours by car.

You can travel to Badrud from Tehran by direct Tehran-Badrud train and then reach Natanz by road. It will take about half an hour to get to Natanz from Badrud.

According to the 2016 census in Iran, the population of the city is 43,977 people. Cucurbits and tree fruits are the main agricultural products of Natanz. From ancient times, the city inhabitants have been famous as gardeners.

There are several industrial towns around Natanz operating in the field of industrial production. The people of Natanz have been famous since long time ago for cultivating flowers and fruit trees.

Nowadays, the economy of Natanz relies on two industrial towns, agriculture and tourism industry. In the agricultural domain, people earn their livelihood by producing garden products, including pears, quinces, walnuts, pomegranates, as well as saffron.

Due to its many historic and natural tourist attractions, the historic garden city of Natanz host many tourists. This has led to the development of various businesses.

The history of this city of Esfahan province dates back to 2500 years ago. Some of the city’s buildings, like the mosque of Natanz, are about 1000 years old, indicating the importance of the city in the distant past.

At the time of Safavid, Natanz became an independent province. As it has good weather, the kings of Safavid considered the city a promenade and a hunting ground for the summer. The kings of Safavid made the city as their summer capital by constructing two palaces on the two sides of Natanz.

After the fall of Safavid, Afshariyah and Zandieh dynasties and by the establishment of the Qajar dynasty, Natanz was still popular among prominent government officials and princes, but they invested few for handling the city.

Over time, by numerous administrative divisions and by connecting and detaching the city from Kashan, the attention to Natanz reduced.

Heres’ a list of interesting places to visit inside the city:

This is one of the oldest mosques of Iran with a round dome next to Abdussamad Esfahani’s Shrine with a conical dome. There is also a very old and tall plane tree in front of them both. The Friday Mosque of Natanz represents the valuable history and architecture of the Islamic period during the Ilkhanid era. It has also got part of its reputation because of the shrine of Abdussamad Esfahani.

This shrine, the adjacent Khaneqah, the octagonal Shabestan with a dome and the tall single minaret next to them have formed Natanz Friday Mosque complex.

Shrines of Natanz
Because of the great number of shrines Imamzadehs, the burial places of the offsprings of Imams, in Natanz, it is known as the land of “Olya-O-llah” which means the friends of God. Several of such burial places are located in the city.

The fire temple of Natanz is a building with four arches (Chahartaqi) belonging to the Sassanid era, located on the back of the mosque of Natanz in a garden called “Imam Jomeh Garden”. To reach this monument, you can walk behind the Friday Mosque Complex and find a short path behind the Khaneqah to get there.

In the southeastern suburb of Natanz and somewhat attached to it, there is an amazing village called Afooshteh, located among the lush green trees. Nine historical and valuable monuments are located in this village.

Mir Mosque and Mehrab
Mir Mosque has two of the most exclusive mihrabs in two stories of this building. These unique mihrabs have beautiful stuccoworks dating back to the Seljuk era. They have floral and angular ornaments and exquisite embossed inscriptions containing the verses of the Quran in Thuluth script.

Here’s a list of these interesting monuments outside Natanz:

The construction of Koohab caravansary or Robat-e Koohab dates back to the era of Shah Abbas I. It has got beautiful architecture with interesting brick decorations.

Gonbad Baz (Abbasi Hunting Ground)
On top of the Karakas Mountains along the old Kashan-Natanz road, there is a dome-shaped and octagonal monument called “Gonbad Baz”. It is made of sun-dried bricks in Abbas Abad hunting area. This historical monument used to be a site for recreation and hunting of the Safavid kings which dates back to the era of Shah Abbas.

Arisman Ancient Area
The historical and ancient site of Arisman is 6000 years old, located 20 km north of Natanz. It is the first metal melting area in the world. The presence of very large furnaces for copper melting, copper ores, castings, and molds has made the region even more attractive. Other monuments discovered in this area include a brick building (most likely part of an industrial workshop) and a cemetery.

Here’s a list of fascinating spots in the nature around Natanz: 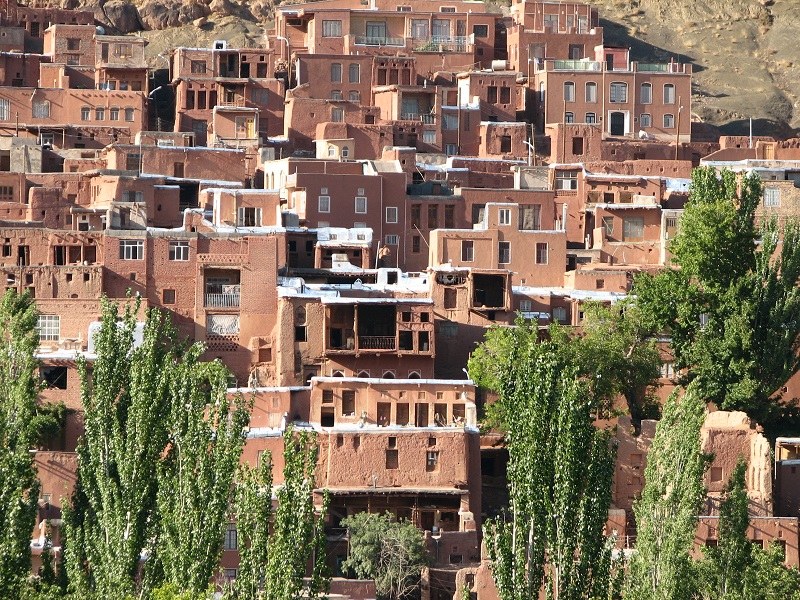 Abyaneh Village is located 40 km northwest of Natanz, on the foothill of Karkas Mountains in a lush green valley. It provides both historical attractions and natural attractions to its visitors.

Due to its unique architecture of adobe houses built with sun-dried bricks, muds, bricks, and wooden beams, this traditional village is very popular among domestic and foreign tourists.

Another attraction of Abyaneh village is the traditional and attractive clothes of local men and women. Women’s clothes belong to the Safavid period and men’s clothes look like those of Bakhtiari People.

This Village is located in Barzrud rural district near Natanz, and mountains and rivers surround it. The proximity to the mountains and rivers has brought a pleasant climate to the countryside. In the village, the local people have preserved the old architecture and kept most of the houses as they had been, made of mud, stone, and wood.

Ghar-e Pariyan
It is a cave, which literally means fairies’ cave. This natural attraction is one of the beautiful caves of Isfahan Province, situated 8 km from Abyaneh in a valley called “Pari Hol”. Archeologists have discovered the cave in 2000. Since then, they have discovered many new findings in the cave.

Nosran Village
The beautiful Nosran Village is located 15km southeast of the historical city of Natanz. The pleasant climate of the village and its location near a roaring river, which has many springs called “Aston”, have made it an attractive place to visit.

Khafr Village (White Hell)
This village is located on the foot of a hill, next to a dry river, 7km northeast of Natanz. This village has a very cold and snowy winter. That is why the villagers call it “white hell”. Khafr Fall, Dena Asa Gorge, Ice Cave, Keikhosrow Cave, Seyyed Mohammad Spring, and the rivers that run across each side of the village and flow into the Marbor River are among the spectacular attractions of Khafr village.

Feriz-Hand is a red water spring located 45km northwest of Natanz. The water of this spring is a mixture of bicarbonate water with gas, very effective in treating diseases of the liver, bile ducts, stomach, and intestine, as well as nutrition and digestive diseases.

Deh Abad Village
This village is located at the edge of the desert, 25 km north of Natanz, on the way leading to Badrud and Abouzidabad of Kashan. The village architecture is very interesting and it has retained its old architecture, to the extent that most village houses have a corridor-shaped entrance. Deh Abad castle is one of the most fascinating places in this village.