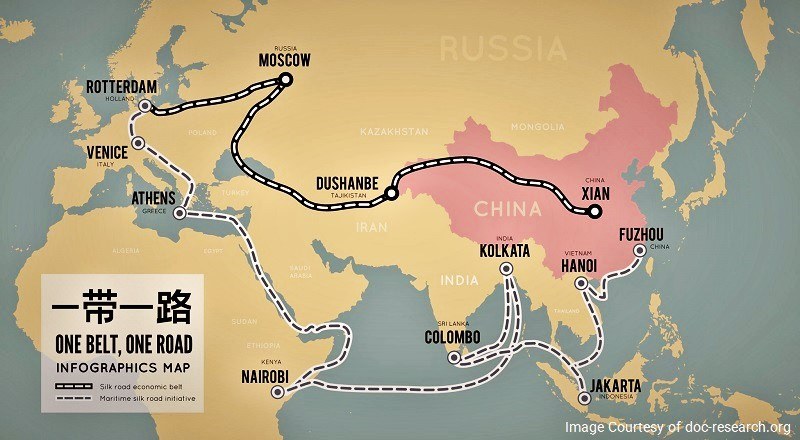 In the ancient time, roads have had a special place in civilization and the establishment of cultural and commercial exchanges in large nations. In addition, the trade corridor of the Silk Road dating back to 1500 BC and 1800 AD, was one of the most effective ways of communication. It not only was the origin of many cultural, commercial, and political developments in ancient times, but also a link between political, economic, and cultural affairs in the present era. Iran had a pivotal role being on this ancient road.

Global Value of the Trade Corridor of the Silk Road

The Silk Road was extended from Dunhuang County to Gansu Province in China, and from there, it reached the current Eastern Turkestan, passing through Central Asia and reached Samarkand and Bukhara from Bish-Baliq, Almaliq, and Otrar.

In Bukhara, the main part of this trade corridor started from Kouyan (Joveyn) and continued to Marv, Sarakhs, Neyshabur, Gorgan, Bam, and Safiabad before it reached Rey. Then, it went from Rey to Qazvin, Zanjan, and got to northern Hamedan. Then, it led travelers from the northern side of Kabudarahang to near Quli Yaba Mountain, Ardebil, Tabriz, and Yerevan. It finally reached Trabzon or Beiki, one of the ports of the Levant, from Yerevan.

The by-route of the trade corridor of the Silk Road was from Samarkand to Khwarazm and from there to Sarai and Hashtarkhan cities and thence to Don River and the ports of the Azov Sea. The most important merchandise passing through Iran was silk. However, since Iranians had imported most of the raw silk produced in China, they could sell the products to the western countries at any price that they wished.

Ferdinand von Richthofen, a German geographer, was the first who called the road the Silk Road in 1877. As the merchants transferred the silk through this road from China to the Mediterranean Sea and various other regions, he chose this name for the road.

The Exchanges between Iran and China

Iran’s particular geographic location and its cultural, political, and economic interactions with most of the countries on the Silk Road had given it a particular position. Given the volume of the economic exchanges between Iran and these countries, it is clear how much the Silk Road has been effective and strategic in creating and consolidating the economic and political ties between the countries near this region.

Countries alongside the Trade Corridor of the Silk Road

In addition to China, the economic relations of Iran with other countries alongside the Silk Road was quite good. Iran had a high volume of economic trades with Azerbaijan, Armenia, and Russia. On the path of the Silk Road, the trade exchanges between Iran and Turkey had a lot of strategic importance.

Maybe, the Silk Road had been the most important road in the world until the 15th century. This road permitted not only the transport of goods but also the spread of intellectual beliefs such as Islam, Hinduism, Buddhism, and Christianity.

In addition, diseases such as the plague distributed also through this road. In the second and third centuries, these diseases reduced the population in China and the Mediterranean countries, resulting in the weakening of the empires in the area.

Archaeological research on the Silk Road began seriously in the 19th century with the help of Europeans. Hermitage Museum of Saint Petersburg keeps a treasure of the ancient objects found in this area. In 2014, the museum exhibited some of these objects to visitors.

In fact, the Silk Road refers to all the water and land ways that connect the civilizational region in the West Pacific to the Atlantic Ocean. These ways went through a wide variety of political, cultural, social, and religious realms. Collectively, they had made a valuable set of precious human heritage.

Archeologically, the historical importance of this decisive trade corridor is recognized when the remnants of architecture, urbanism, ancient bridges, and so forth are compared. The result will certainly bear positive connotations in view of other sciences and techniques, such as historical geography and military science.

Because of the high traffic of this road, there are inscriptions and important reliefs carved on the mountains and rocks located on the edge of this road, which played the role of modern advertisement and online advertising for the merchants of that time.

Some of the most important advertisement examples of the ancient time of this trade corridor of the Silk Road are:

Historically, the purpose of Iranians was not merely purchasing silk at that time. Rather, it was mainly for weakening the Roman Empire.

The Route of Spreading Cultures

In terms of communication between people, the artistic and intellectual trends, traditions and rituals, and the transfer of culture through merchandise, the Silk Road had a significant role. For example, all the eras such as Parthians, Sogdians, Khotanians, and Khwarazmians in Central Asia contributed to culture transfer.

It was through Central Asia that immigrants, merchants, and missionaries traveled from the west to the east of Asia, who were the agents for the transportation of material, cultural and religious products. Occasionally, they encountered the influx of ethnic groups such as Huns and Hephthalites on this route. In any case, Iran, China, and India were the most important and influential countries on this strategic road.

In other words, the trade corridor of the Silk Road was an important factor in economic exchanges and the transfer of advanced science and technology between the East and the West. Before the Renaissance in Europe, this transfer of science was from the East to the West and after the Industrial Revolution, it was from the West to the East.

The World Assembly of Silk Road Cities was opened in Iran in September 2016 as an International Center for Cultural, Economic, and Tourism. This organization is based in Sa’d-o-Saltaneh Caravansary of Qazvin. It works under the supervision of the UN-Habitat in Iran to gain constructive interaction and cooperation with 300 cities from 73 countries alongside the trade corridor of the Silk Road.

The purpose of this cooperation is to reach the goals of sustainable development by establishing a cultural, economic, and tourism committee in Qazvin, as the global center of the citizens of the Silk Road.

China introduced the “New Silk Road” plan in 2013 as a way to expand the relationship between Beijing and Asian, African and European countries through infrastructure investments.

With a huge investment in railroads, routs, and ports, the civil companies of China have received lucrative deals for linking ports and cities – with loans from Chinese banks.

On May 16, 2017, during a ceremony attended by leaders from nearly 30 countries, China opened the New Silk Road to pave the way for the greater economic ambitions of this Asian powerful country. The New trade corridor of the Silk Road offers a new opportunity to countries on its way to expand their business in Asia, Europe, and Africa.

In addition, on April 27, 2019, at the end of a conference called “New Silk Road” or “One Belt One Road”, the President of the People’s Republic of China, requested that more countries take part in this great project. The countries have signed an agreement with a value of $ 64 billion for constructing and launching the New Silk Road.

While most of the new Silk Road projects are continuing based on the previous plans, some of the projects have been postponed due to changes in the governments of some countries, including Malaysia and the Maldives.

In addition to the land Silk Road passing through some parts of Iran, the Silk Road of the sea is one of the most important commercial trade corridors in the world. The target of constructing this road was to change the political and economic structure of Europe and Asia. In fact, with the development of maritime technology, the countries paid attention to the role of maritime transport in business and built this sea road.

The road passing through the Persian Gulf has affected the political, economic, and cultural affairs of the countries on the route from China to Iran. Although the Silk Road of the sea was longer than the land Silk Road and had unknown risks and dangers, in some cases, it was better.

In the antiquities, the increase of the maritime power of Iran empires used to lead to the further development of the trade corridor of the Silk Road on the sea. Moreover, this development did not stop even in the post-Islam era. Iranians had plenty of shares in the silk trade and other goods along the road, and their naval fleets were moving between Iran and China ports as a consequence.