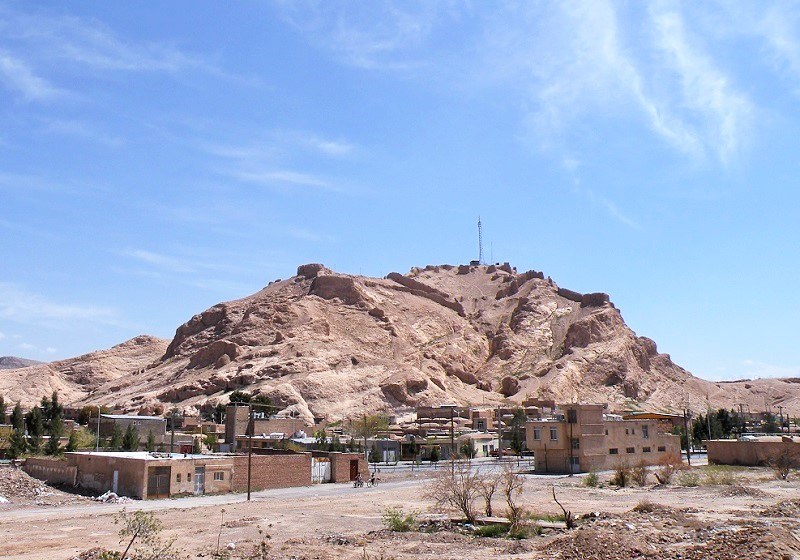 To understand the historical and cultural perspective of Kerman and the importance of its geographical location, we should refer to its past. One of the main reasons for the creation of Kerman City is its location. During the Elamites, Kerman was a stronghold city providing security for travelers and caravans traveling from the east (India) to the west (the Mesopotamia). Therefore, it connected the Indian civilization to the Sumerian civilization.

In addition, Kerman served as a joint to connect the East to the West several hundred years ago. Consequently, the bazaar of the city has a particular importance. That is why the design of Kerman city is based on business lines.

In addition, the south-to-north line extends from Ancient Bazaar (Bazaar-e Kohan) to the free market. The line begins from the Rig Abad Gate and leads to around Gabri Gate. On the other hand, the east-west line of the Kerman Bazaar begins from Masjed Gate and reaches Arg Square.

This plan shows the importance of commercial and economic exchanges in Kerman. The business axis of the city is geometrically in the form of a cross-shaped intersection (four-way intersection). This is one of the most beautiful types of Iranian bazaars. In addition, it provides further access to the bazaar and historical-cultural perspective of Kerman.

Description of Global Value of the Monument

Kerman Bazaar has been formed over the past 600 years following the formation and expansion of the urban structure. It is a unique and comprehensive bazaar in Iran.

Also known as the Ganj Ali Khan Bazaar, Kerman Bazaar starts from Arg Square and ends in Moshtaqieh Square. Architects have created all the monuments around Kerman Bazaar since the Safavid period in connection with the bazaar. This shows the importance of the bazaar in the historical and cultural perspective of Kerman.

Kerman Grand Bazaar has different Rastehs (main passageways) and bazaars to the extent that the complex of buildings connected to this bazaar forms 60% of Kerman historical monuments.

As the first foundation of Kerman Grand Bazaar, Ekhtiari Bazaar belongs to the late Mozaffarid and Timurid periods.

Kerman Grand Bazaar has seen several historical periods’ developments. Its architectural style is very rich and valuable. By the specific shape of each bath or mosque in different bazaars, we can study the type of architecture of their periods and achieve amazing results.

According to many tourism researchers, this bazaar is one of the largest and longest bazaars in the country. In addition, since a long time ago, it has been a place for buying, selling, exporting and importing various goods in the province.

Considering that Kerman Bazaar was located on the Spice Road and then the Silk Road, it has played an important role in the economic prosperity of the region. Merchants exported textiles, copper dishes and various types of handicrafts from Kerman to China and India, and imported spices and fabrics from there.

On the other hand, there are also mosques and baths in each of the bazaars. Religious monuments like Saf-e (Tekiyeh-ye) Azakhaneh, Vakil Mosque, Ganj Ali Khan Mosque, and Chehel Sotun Mosque constitute the bazaars and take their names from the same bazaar. Hence, the historical and cultural perspective of Kerman consists of the culture and beliefs of the local people in various historical periods.

In addition, Kerman Grand Bazaar has also other buildings around, each one created in connection with different bazaars and in different periods of time. This shows the social and cultural role of the bazaar among local people.

Another feature of the historical and cultural perspective of Kerman, and especially Kerman Bazaar, is the fact that the location of Qal’eh and Qal’eh Mahmoud bazaars are parallel and perpendicular to Kerman Bazaar.

In the first step of visiting Kerman Bazaar, we enter Arg Square starting with the large entrance of Naqarkhaneh Bazaar. This bazaar has a large, high and tiled ceiling and portal and some rooms upstairs. It seems that the architecture of this section dates back to the late Qajar period. 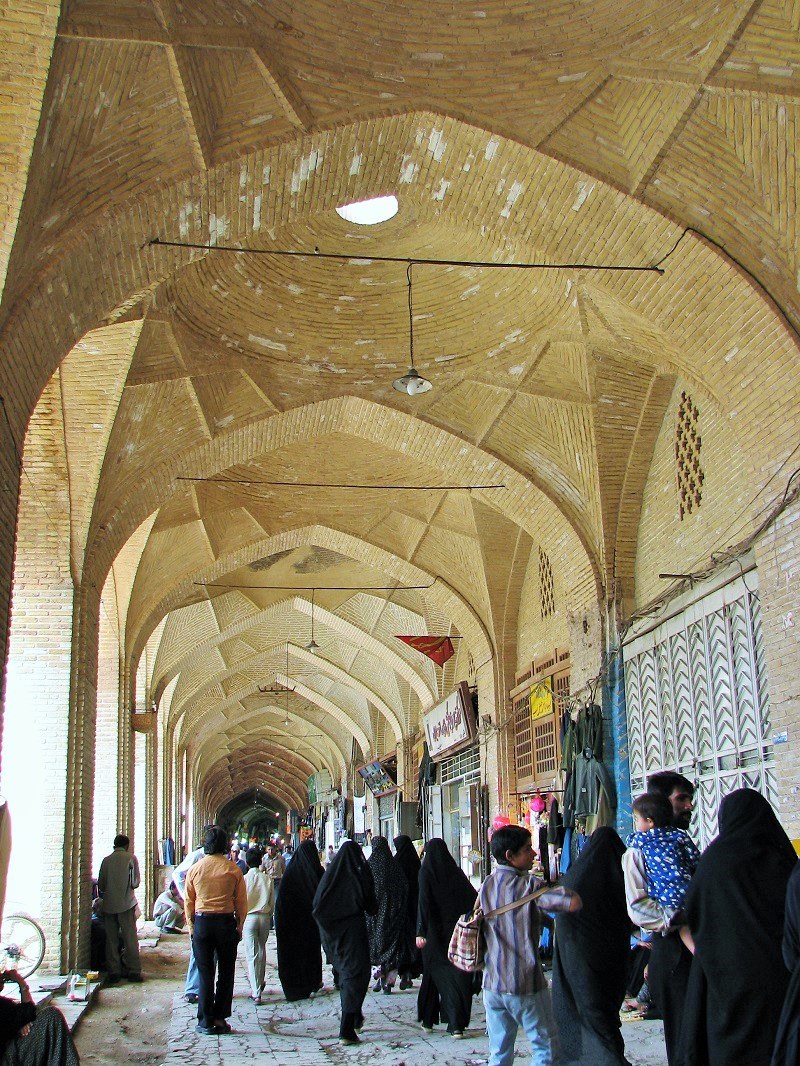 Ganj Ali Khan Complex is a turning point in the history of Kerman Bazaar. According to authentic documents, architects have built the complex in the ancient bazaar of Kerman.

It is also one of the most prominent examples of Safavid era architecture. This building dates back to the rule of Ganj Ali Khan in Kerman. Shah Abbas I, the famous Safavid king, ordered its construction.

Ganj Ali Khan Bazaar is located between Chahar Suq (the intersection) and Ekhtiari Bazaar, in the southern part of Ganj Ali Khan Square. About a few hundred meters after entering Kerman Bazaar from Arg Square, there is Ganj Ali Khan Historical Bath on the right side of the bazaar.

The bazaar extends around Ganj Ali Khan Square and links the various parts of the complex to each other, such as school, caravansary, minting house, mosque, and water reservoir.

It is worth noting that architects have built a caravansary (a school) with four eyvans and two floors in this site in 1599. Its portal has magnificent and valuable Muqarnas decorations.

Ganj Ali Khan Mosque or praying house is located near the school. With an area of 27m2, the mosque is used as a small museum displaying the post-Islam architectural decoration of Iran during the Safavid period, such as stucco, tile, calligraphy, Muqarnas, Karbandi, carvings and some beautiful paintings.

In addition to this mosque, there are other mosques in the complex, including one in Chahar Suq-e Mesgari. Furthermore, Ganj Ali Khan Bath is one of the masterpieces of Oriental architecture. In this bathhouse, all the spaces look like cut crystals.

For the decoration, the interior facade of Chahar Suq has stuccos and oil paintings dating back to 400 years ago.

The British Army rented this caravansary for Indians in the second half of the 19th century. Since the Indian merchants sold things such as spice, pepper, and cardamom, it became well-known as Hindus Caravansary. The Hindus Temple with the special architecture of Indians has remained in this caravansary.

This tight and narrow bazaar is the oldest part of Kerman Bazaar. The importance of this market is due to its location between Ganj Ali Khan and Vakil bazaars.

Chehel Sotoun Mosque, Golshan Caravansary, three Sardari Bazaarchehs and, at the end of the bazarchehs, Vakil Bath ( now a traditional teahouse) are among some parts of the bazaar.

Among the architectural elements of the Mozaffari Bazaar, we can mention Tekiyeh (Safe) Azakhaneh, Qadamgah Bazaar, and Kerman Friday Mosque. The construction of Mozaffari Bazaar dates back to 1349 and includes a water reservoir, mosque, school, Tekyieh, and bazaar.

After arriving in the city from the northern gate of Kerman Old City (Khorasan Gate) and taking a short distance, you will arrive at the Aziz Bazaar. It means that Aziz Bazaar is a part of the northern-southern rasteh of Kerman Bazaar.

On the other hand, the complex is located near Ibrahim Khan Complex. The construction of this bazaar dates back to the late 19th century (during the Qajar era). Aziz Bazaar includes Chehelsotoun Mosque, water reservoir, bazaar, and caravansary.

This part is the westernmost part of Kerman Bazaar, which begins from Arg Square and ends in Ganj Ali Khan Intersection. This bazaar surrounds Tohid Square like a rectangle. It is composed of two sub-sections called “Neqarkhaneh Bazaar” and “Seraji Bazaar”.

On the northern side of Ganj Ali Khan Square, there are the Northern rasteh of coppersmiths. Ibrahim Khan beautiful complex and bazaar are located after Hatters Bazaar. Ibrahim Khan Complex consists of a school, bath, Qeisarieh and the water reservoir.

Sardar Bazaar
This Bazaar is composed of several crossover bazaarchehs connected to Ekhtiari Bazaar with three main rastehs on the margin of the bazaar. The vast majority of its shops are fabric stores.

Rasteh-ye Jonoubi (Southern Rasteh) is the oldest rasteh (main passageway) of Kerman Bazaar. The Southern Rasteh of Kerman Bazaar started from the southern gate of the city and reached the Chahar Suq at the center of the bazaar. In the past, the caravans entering the city from the south, as well as the caravans traveling from the north (Khorasan) to the south of Iran, passed through this bazaar and its gates.

This Bazaar is the first section of the North-South Bazaar and is located in the southernmost part of it. There are still old-style blacksmith shops in this part of the bazaar.

It is among the oldest and longest bazaars in Kerman after Kerman Grand Bazar. It is located in Qal’eh Square. Due to its proximity to eastern and western bazaars, it is more important than Qal’eh Mahmoud Bazaar and it economically more prosperous.

The Historical and Cultural Perspective of Kerman & Similar Monuments

Eventually, to help you with understanding the historical and cultural perspective of Kerman, we will introduce other Iranian monuments so that you compare them with one another:

Historians estimate that Narin Qal’eh dates back to the Medes’ era, Parthians and pre-Islam periods. The architects and designers have built this castle of Meybod in seven floors with towers and different narrow passes in an area of three hectares.

Like other Iranian walled towns, there is also a moat for the defense against invasions and attacks of foreigners around Narin Qal’eh.

Only the central part of the castle, among its four high towers, has survived the damages. National Heritage Organization of Iran inscribed Narin Qal’eh in its heritage list.

This monument is located at Firuzabad-Shiraz road on a hillside overlooking the road. Walking a distance of about 300 meters uphill, you will reach the castle. The construction of this castle dates back to the late Parthian era.

The castle had three floors. The entry was through the lowest floor and a spiral staircase reaching the main courtyard of the middle terrace. There were rectangular-shaped rooms with curved ceilings on three sides of the courtyard.

Ardeshir Castle of Kerman
This is one of the ancient castles in Kerman City. Ardeshir and Ferdowsy have written many things about these castles respectively in their books of Karnamag of Ardeshir and Shahnameh.

Ardeshir Castle of Kerman is located on the top of a mountain in the historical district of Kerman. The construction of this military-defensive castle on the mountain top inside Kerman has made it known as “Mountain Castle”. The castle belongs to the Sassanid period.

The above examples indicate the impact of the location of a city on the development of its architecture and monuments. Hence, by studying the historical and cultural perspective of Kerman, one can understand the specific situation of this city in Iran and its effect on the formation of the main bazaar and the related monuments.