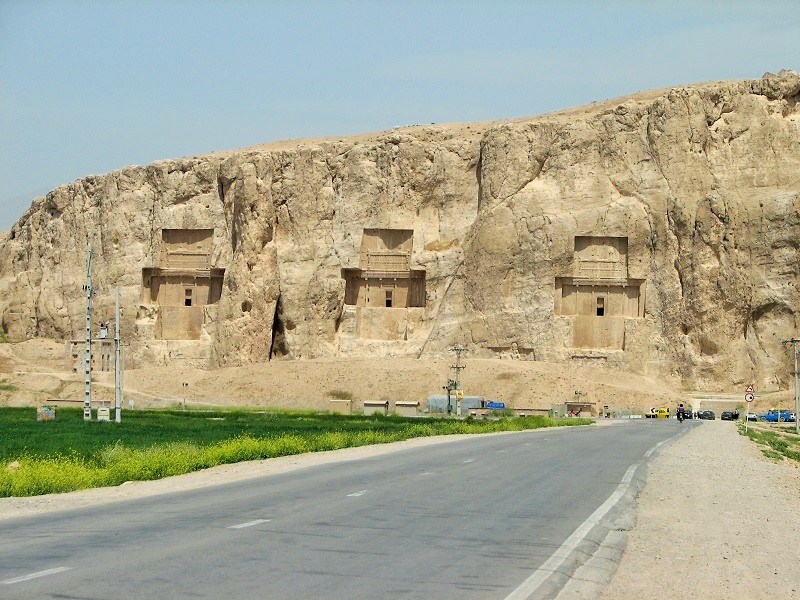 You can visit Naqsh-e Rostam a few kilometers away from Persepolis in Fars Province. Local people, who had seen the rock reliefs at this archaeological site for centuries, have attributed the rock images to the national heroic character of Shahnameh (Iranians’ epic poetry book composed by Ferdosy) and called it the image of Rostam or Naqsh-i-Rustam.

This site had first been used approximately at late second millennium BC. The evidence proving this is a relief left at the side of one of a Sassanian one in a completely different style, which is believed to belong to Elamites. Then, during the 3rd and 4th centuries BC, after Darius I chose this site as his burial place, Achaemenian kings decided to build their rock tombs at this place. Also, there is a cubic building that remained in good shape from this period in front of the cliffs. During Sassanians, around the 3rd and 4th centuries AD, again the kings ordered the historical events of their time to be carved on the face of the same Mount.

Location and Position of Naqsh-e Rostam

At the end of a mountain ridge called Hossein, where the cliffs look tilted to come down to the ground, the rocks are in a  perpendicular shape ideal to depict some monuments for the travelers to see. I’m not talking about today’s travelers. There used to be an ancient royal road leaving Persepolis passing by Naqsh-e Rostam and continuing to Ecbatana. The travelers who went by this area could easily see these monumental rock tombs as well as rock reliefs.

This site is located between Persepolis and the ancient city of Estakhr, where the world-class artists and artisans were living during the construction of Persepolis. The city was the most prosperous and well-known settlement at the time of Achaemenians and kept this state until Arabs destroyed it largely in their 7th-century attack.

Today, the main Shiraz-Esfehan highway and railway are crossing the plain and valley opposite this site. There are several farming fields adjacent to Naqsh-e-Rostam where local farmers are cultivating corn, tomatoes, wheat, etc. The soil is very fertile as it has always been and even more in the ancient times when a large river was snaking through the valley.

The Historic Monuments at Naqsh-e-Rostam

A totally different style, which isn’t as complicated as the other ones and obviously predates others, is the image of a man standing by himself. It must have been part of a larger image, but at the time of Bahram II, it has been cut off and replaced by some new carvings. The artistic style and dress code indicate that the relief belongs to Elamites. 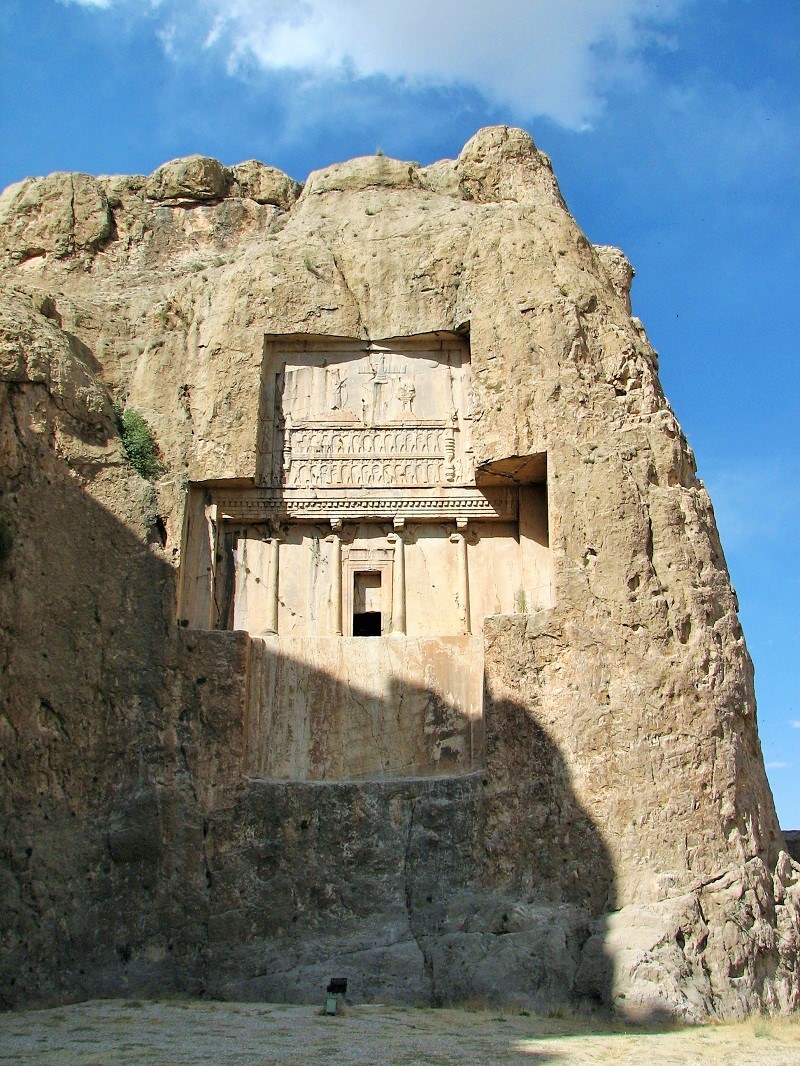 There are four rock tombs carved into the face of Hossein Mount that are tombs of Xerxes, Darius I (The Great), Artaxerxes I, and Darius II. They are almost identical except for a large number of inscriptions in cuneiform at the tomb of Darius I. Persians had learned the tradition of burial at rock tombs from Medes whose tombs at Western Iran predates these ones.

What can be seen in all of them is a recessed Mithraist cross like the entrance of a palace with a group of different nations carrying the royal throne on top of it. Above that, there’s a middle-aged man standing in front of a fire altar with one hand holding a bow in the other one is raised. The emblem of Fravahar (symbol of Zoroastrians) is at the top middle and the Sun at the top right to symbolize Mithraism.

Inside each of these rock tombs at Naqsh-e Rostam, right after the entrance, there’s a vestibule leading to a larger hall in which a series of sarcophagus-style graves had been dug to accommodate the corpses of the kings and his royal family. The Achaemenian kings were mummified before being laid inside the sarcophagus. The other family members were not buried simultaneously with the king. The tomb was built for them to be buried there after they died at any time.

The inscriptions at the tomb of Darius the Great are playing an important role in explaining how the political, religious, social, etc situations were under this dynasty. Darius, I was such a character that ordered several inscriptions to be carved on the parchment, clay, and rocks explaining how things were at his time. It’s because of him that we know a lot about Persepolis, Achaemenians, and life under these emperors. The building called Zarathustra’s Cube or Kaaba-ye-Zartosht at Naqsh-e-Rostam has got its name from the time when Iranians wanted to avoid the destruction of these sites by Arab Invaders. As Muslims’ prophet, Mohammad, had presented them with a Kaaba, local people wanted to show to the Arabs that they believed in the same concept offered to them By Zarathustra who was against idol worshiping and believed in one God, just like Muslims. So, they managed to keep it away from destruction. The reason for building Kaaba-ye-Zartosht is a topic of controversy. There are different ideas introducing it as an Achaemenian tomb, a fire temple, a building to keep Avesta’s holy scriptures, or a calendar building.

The original elevation, where this building was constructed, used to be approximately 6 meters below the elevation today. As a matter of fact, there was a wall surrounding all we see at this site today, which is destructed and nothing is left from it. Therefore, the raised heap of earth plays the role of that wall today.

Sassanian kings chose Naqsh-e-Rostam as an ideal site to showcase their military victories, war scenes, and coronation ceremonies. The historical era under which Persian and Roman empires were entangled in several wars brought a lot of destruction, poverty, and other social issues for the Iranian society. This was after the birth of Christ and the new era of Christian states like Rome and Armenia being part of the Sassanian Empire.

As Zoroastrian priests were playing major roles in the ruling system of the time and there was a lot of religious discrimination against non-Zoroastrians, the image of the most famous Sassanian priest, Kartir, is also carved with some inscriptions explaining how the believers of other religions were persecuted.

The victory of Shapur I against Valerian, the Roman Emperor, was the outstanding event of Sassanian time. That’s why its pictorial scene has been hugely carved on the rocks Naqsh-e-Rostam cliffs and its historical explanation has been carved on the lower part of Kaaba-ye-Zartosht.

The style of the Sassanian rock reliefs is clearly different from those of Elamites and Achaemenians. The front side of human figures is completely seen and the proportions are exaggerated. Extra strong arms and legs, as well as extra broad shoulders, are the characteristics of Sassanian human depictions on the rock reliefs and other forms of arts. The religious figures accompanying kings and their families are either deities like Anahita, the Goddess of water and fertility, or an agent from Ahura Mazda (The great God in Zoroastrianism).

If you take tours to Iran and stay in Shiraz, make sure you visit Naqsh-e-Rostam and explore its artistic features.

Explore Historical Houses of Kashan during Your Visit to Iran