Taq-e Bostan, means “Arch of the Garden”, is one of the world’s historical masterpieces and one of the Top Iranian monuments. Taq-e Bostan is a collection of the Sassanid era’s rock carvings. This valuable collection showcases the zenith of such art under the Sassanids.

It includes several reliefs symbolic of the history of the Sassanid period. The images of such kings as Ardeshir III, Khosrow II, and Shahpour III, among the rock reliefs are gateways to the history of this region of Iran.

This valuable historic monument is located on the northern side of the city of Kermanshah, next to a beautiful fountain. Taq-e Bostan is a name derived from the name of “Taq-e Vastam”. The historical books mentioned other names for this monument; Taq-e Bisotun, Takht-e Bostan, and Shabdiz are among the other names of Taq-e Bostan.

The creation time of Taq-e Bostan is not clear. Historians and archaeologists don’t unanimously agree on the exact date of these carvings. According to the documents and the recent studies on the archaeological excavation in Taq-e Bostan, Hertzfeld, a German archeologist, believes that the creation of this monument belongs to the Sassanid era and the reign of Khosrow II (590-628). During the Sassanid era, Taq-e Bostan was a gathering center for the kings and a special point for holding their aristocratic ceremonies.

This monument, which is an art of rock carvings of the Sassanid era, is composed of different parts. Here are the main parts of Taq-e Bostan:

Relief of Coronation Ceremonies of Ardeshir II: The first relief carved in Taq-e Bostan belongs to the time of the reign of Ardeshir II, the 9th king of Sassanid dynasty. This relief represents an agent of Ahura Mazda (the creator and sole God of Zoroastrianism), Ardeshir II and Zoroaster, from right to left respectively.

Small Arch: this is another section of the Sassanid rock reliefs. The size of the Small Arch is obviously less than the size of the Great Arch. It’s around 5 meters high and 3.5 meters wide.

The facade of the Small Arch is also relatively oval-shaped. The reliefs on the Small Arch of Taq-e Bostan are the motifs of Darius III and Shahpour II. In addition to these two unique reliefs, there are rock inscriptions and manuscripts remained from the Sassanid era on the arch that all represent the history of the Sassanid Empire.

The relief of Mohammad Ali Mirza is the newest part of these reliefs, as it dates back to 1859 when Mohammad Ali Mirza ordered to carve the relief on top of Taq-e Bostan. It has been common throughout various historical eras that the recent rulers and kings ordered imaged and letters to be carved next to the ancient predecessors or similar to them in other places. The idea was to reconnect themselves to the glory of the past in the eyes of the people and those who saw the recent carvings.

Motifs of the Sassanid Monument

There are many motifs on these reliefs, the images of Sassanid kings like Ardeshir II, Shahpour and Darius III. There are embossed motifs of plants on both sides of the Small Arch. We can see the motifs of horsemen riders of the Sassanid army on the Great Arch of Taq-e Bostan.

Another great motif of Taq-e Bostan is “Naqsh-e Savar Kar”. This petroglyph shows a rider wearing armor and helmet. The rider is on a hulking horse. He is the symbol of the Sassanid army. The plants with twisting foliage ornate the borders of the rock reliefs.

Why Should You Visit this Ancient and Artistic Monument?

The eternal and historic monument of Taq-e Bostan is one of Iran’s most spectacular masterpieces. The artists working on this monument have carved the inscriptions and rock carvings wonderfully and created a very stunning view. For visiting Taq-e Bostan, you need to travel to Kermanshah City.

Rahman Mehraby is the founder and owner of Destination Iran. He plans quality tours and provides advice for tour customization. You can rely on his itineraries to get an exclusive tour to Iran. 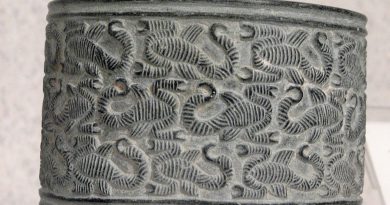 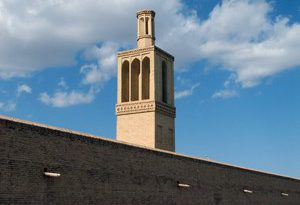 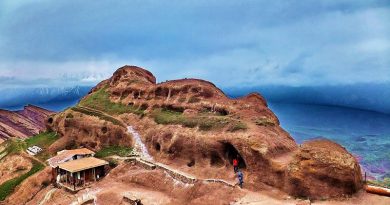 The Natural & Cultural Landscape of Alamout