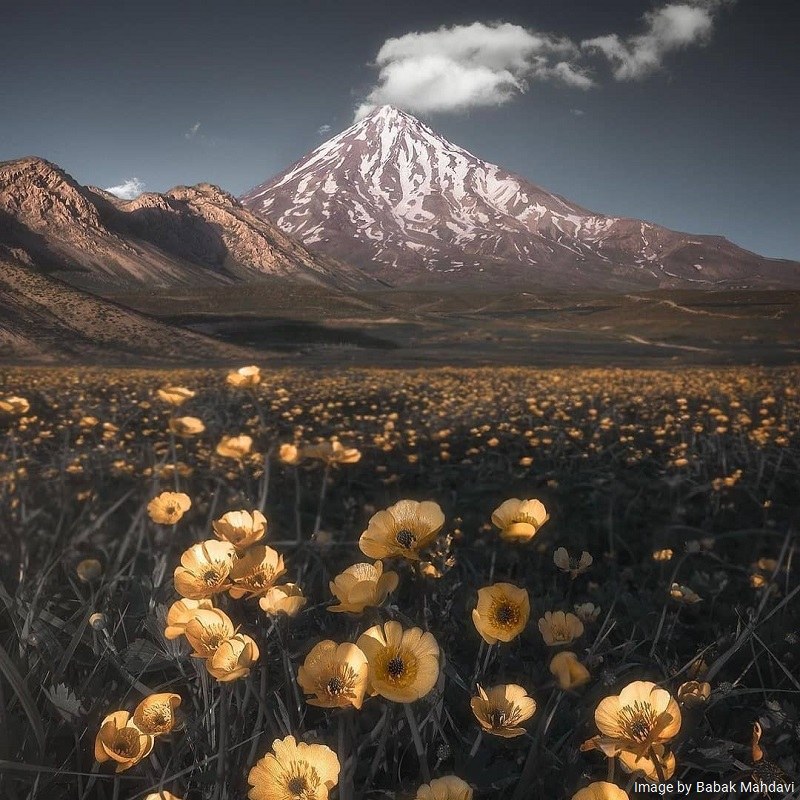 Mount Damavand is located in northern Iran. The summit height is 5,610 meters above sea level. It is also the highest peak in Iran and the highest volcanic summit in Asia and the Middle East. Mount Damavand is the first natural monument of Iran inscribed in the National Heritage List of Iran. 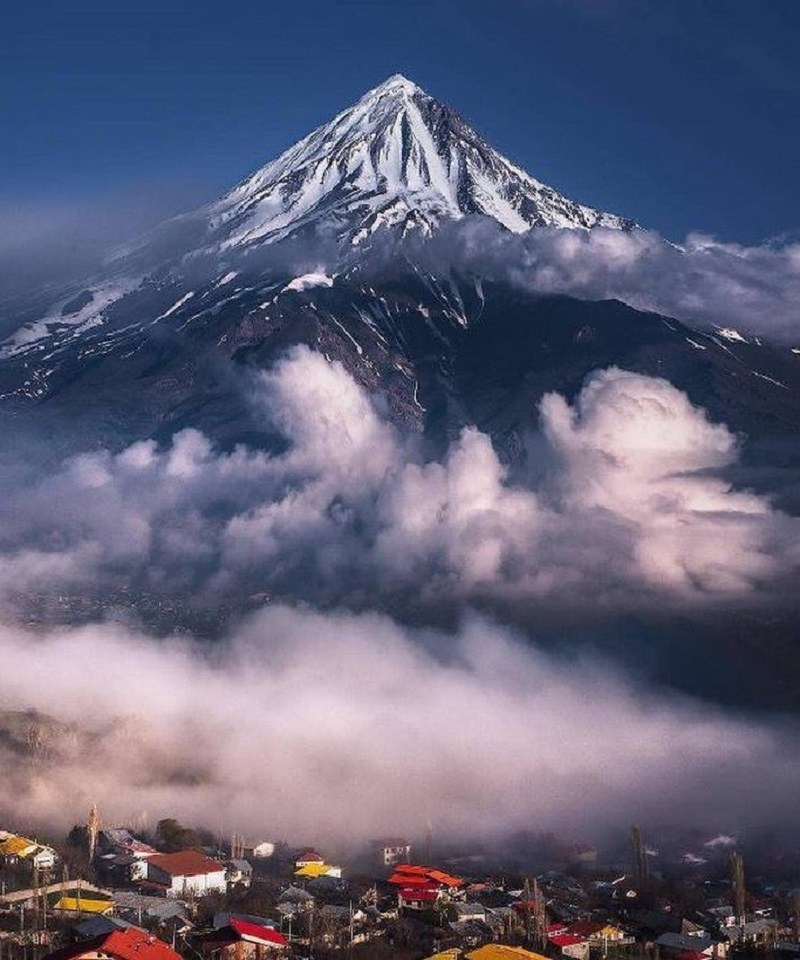 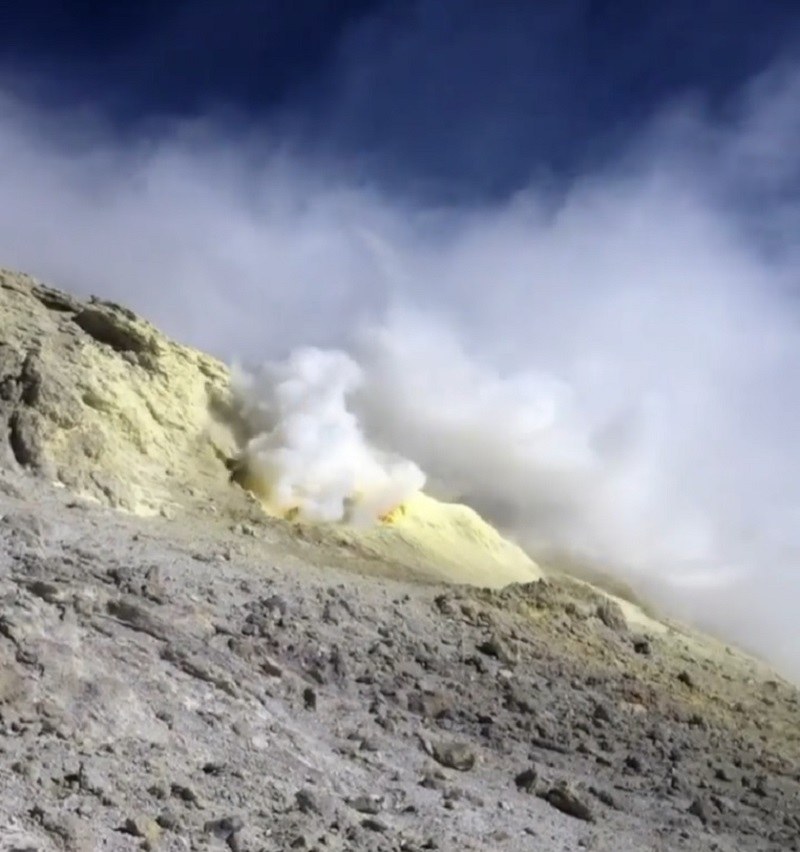 Here are the famous glaciers of Damavand: 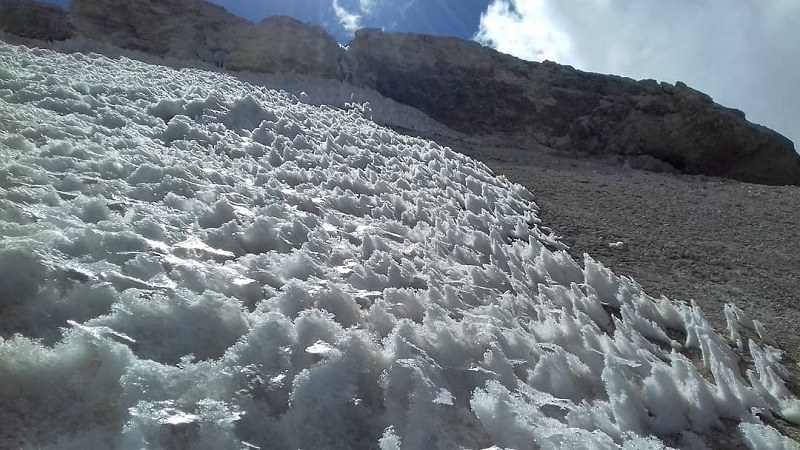 At various altitudes of Mount Damavand, numerous and varied plants grow. At an altitude of 2,000 to 3,500 meters high, poppy flowers cover the hillsides of Mount Damavand. Because of its special location, the area overlooks a forest on the north, and the mountains with the same border with a desert, on the south.

The Main Routes to the Summit 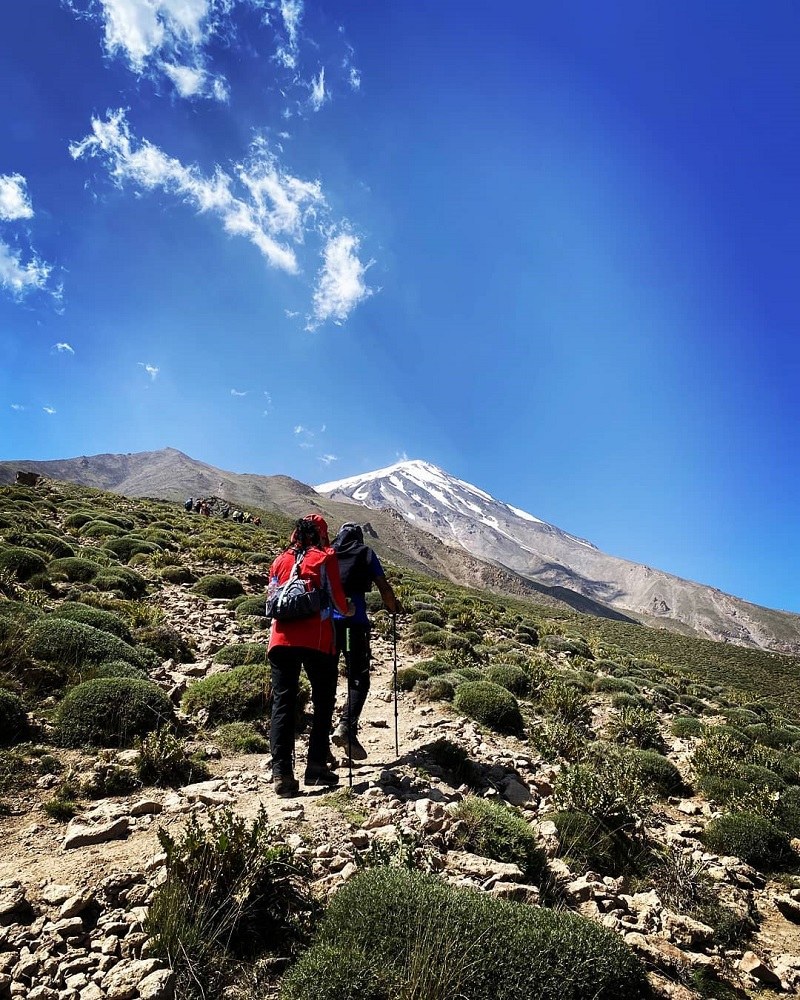 There are several routes to take to get to the top of Mount Damavand. Here are the main ones:

The climbing route to this front takes place between Sioleh Glacier and Dobi Sel Glacier. This route has steep slopes at the ends, making the climbing difficult.

This route is longer than other routes. However, the slope is milder.

On this route, the slope of the end of the path is relatively steep.

The most common and most crowded route to reach the summit of Damavand is the southern route. The mountaineering through this route begins from a place called Dorahi (which means crossroads in Persian). The paths of this route are very clear due to the high usage. There is not also the risk of kicking the stone along this route.

The easiest of the route is the southern face and the toughest is the northern face. The three northern, southern, and northeastern faces are located near the villages and all have parapets halfway to the top. There are 7 parapets and shelters built so far on the main climbing paths of Damavand.

The Assyrians considered Mount Damavand the Azure rock mine. This mountain was an important part of the Medes rule. There are many pre-history graves in Damavand.

In the eighth century, there was a fortress at the foot of Mount Damavand where Zoroastrian priests lived. During the reign of the Pahlavi dynasty in Iran, the figure of Mount Damavand was designed in the middle of the official emblem of Iran. Damavand Summit is a symbol of stability in Iranian culture. This mount is a national symbol.

Iranians celebrate Damavand National Day every year on July 13th. The celebration has also reached the national record. In addition, Barf Chal (snow pit) celebration takes place in May in the rural areas of Amol City. Every year, people collect the remains of snow on the slopes of Mount Damavand in the spring dump it in a pit. This is a forecast to save enough water for the summer.
Damavand National Music

Over the past hundred years, Iranian governments have printed the figure of Damavand on or back of official Iranian banknotes.

We can see the trace of Damavand in Iranian mythology. For example, in the epic book of Shahnameh of Ferdowsi, Zahak, an evil figure in Persian mythology, was imprisoned in this mountain. Naser khosrow Qobadiani-e Balkhi has written about Damavand early in his travel book. Damavandieh, the poetry of Malek ol-Shoara-ye Bahar about Damavand is also famous.

Bal’ami mentioned in his book, entitled Tarikh-e Bal’ami, that the residence of the legendary king Keyumars, the first king of the Pishdadian dynasty of Iran, was Mount Damavand. In addition, Bal’ami noted in his book that Kay Khosrow, a legendary king of Iran of the Kianian dynasty, went to Mount Damavand after renouncing the throne and ascension to heaven. In the poems of other poets such as the “Vis and Ramin”, written by Fakhroddin As’ad Gorgani, and a poem of Khaqani, we can see the name of Damavand. The Iranian literary men have also exampled the grandeur of Damavand in their notes.

Comparison with Other Similar Attractions 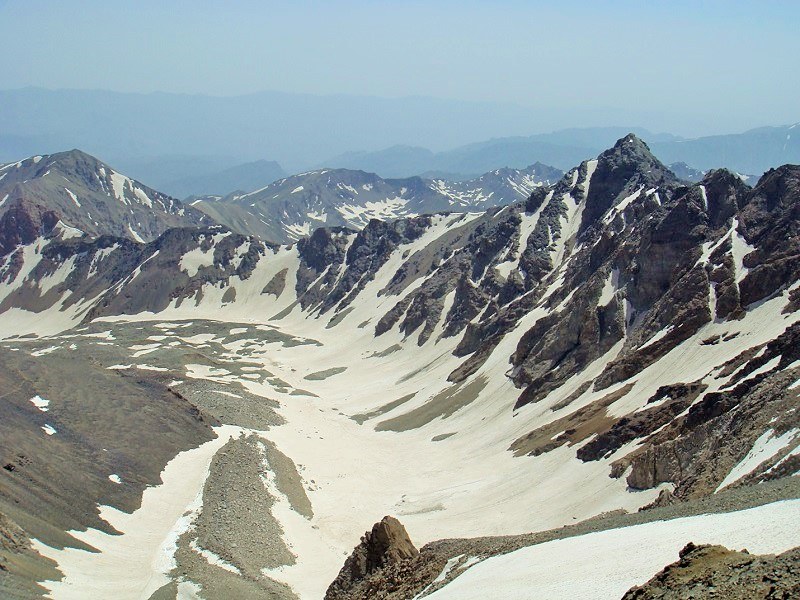 It is the second-highest mount in Iran. The altitude of its summit is 4850 meters. Mount Alam is located in Mazandaran Province in Takht-e-Soleiman region. The most important part of this mountain is a wall on its northern slope. This section is one of the most technical and difficult routes of rock climbing and wall climbing in Iran. For Iranian rock climbers, this is as difficult as Mount K2 is for the world climbers. On the north side, this mountain overlooks Kelardasht City and on the south side, it has a beautiful view of Taleqan City. 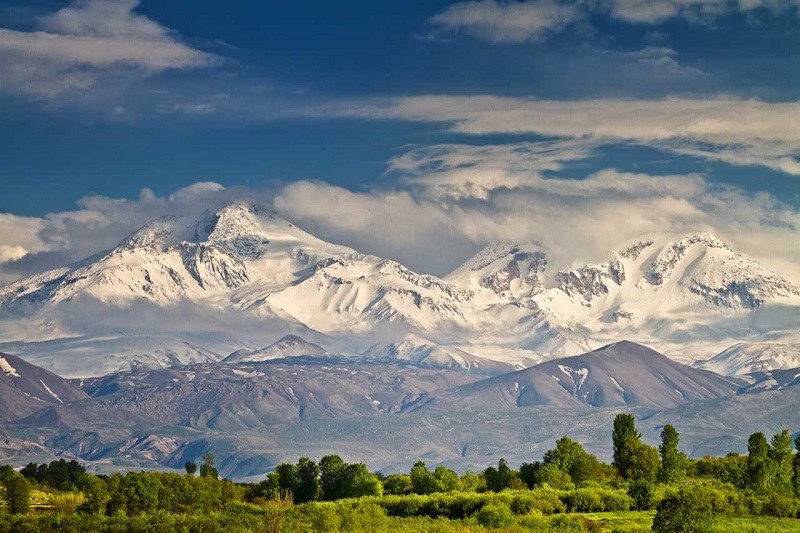 This mount is located in Ardebil Province. It ranks third among the highest mounts of Iran. Sabalan is an inactive stratovolcano in Iran. The altitude of its summit is 4,811 meters. There is a small lake at the top of this mountain. Furthermore, there are natural spas on the hillsides and foothills. According to some beliefs, Mount Sabalan was the place where God chose Zoroaster as a prophet. Hence, it is a sacred place for Iranians. 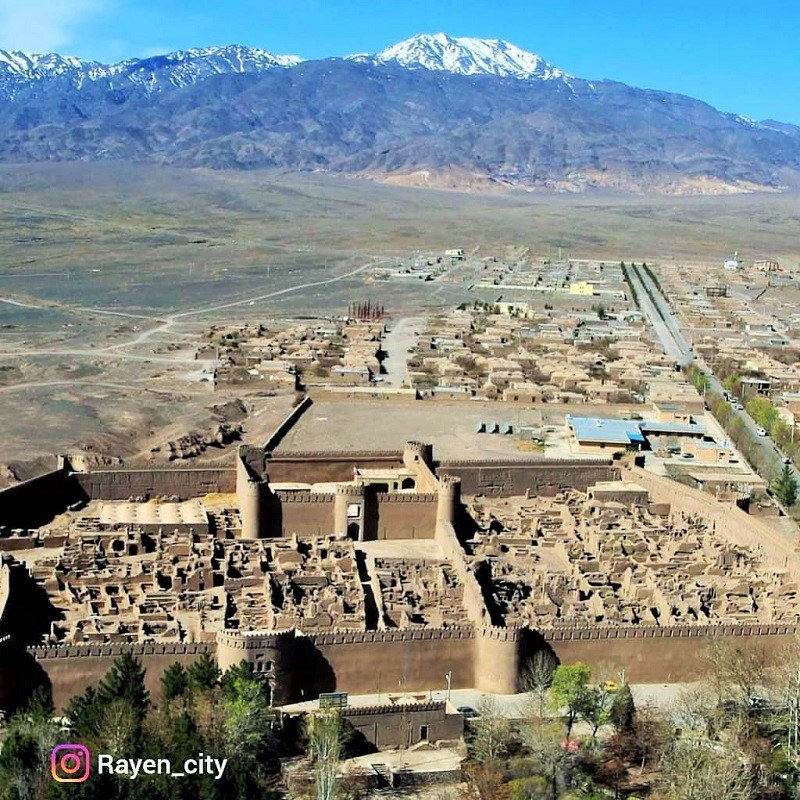 This mount is located in the Rayen District of Kerman Province. This is the highest summit of Kerman Province. As there are thousands of plant species in this mount, Iranians called it Mount Hezar (Hezar means thousand in Persian). There is also an interesting village at the altitude of 3,309 meters of this mountain. 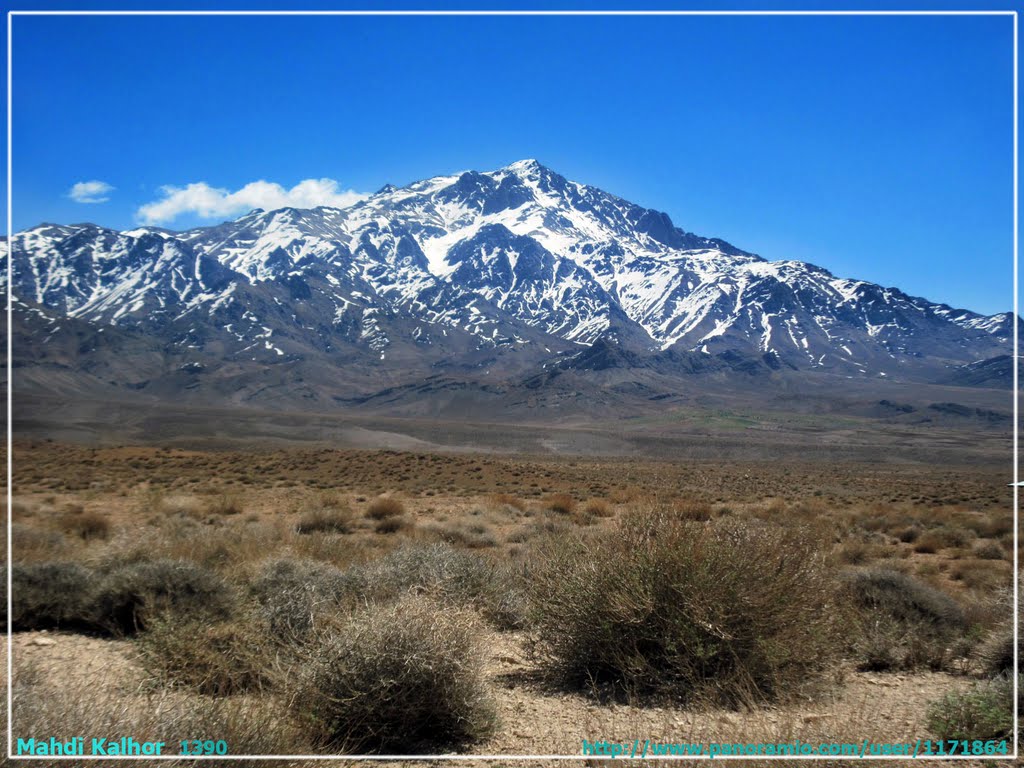 This mountain is located in Kerman Province. The height of the summit of Mount Shah is 4,351 meters. It is also one of the highest mounts in Iran. This area was a protected area during the Qajar and Safavid periods. 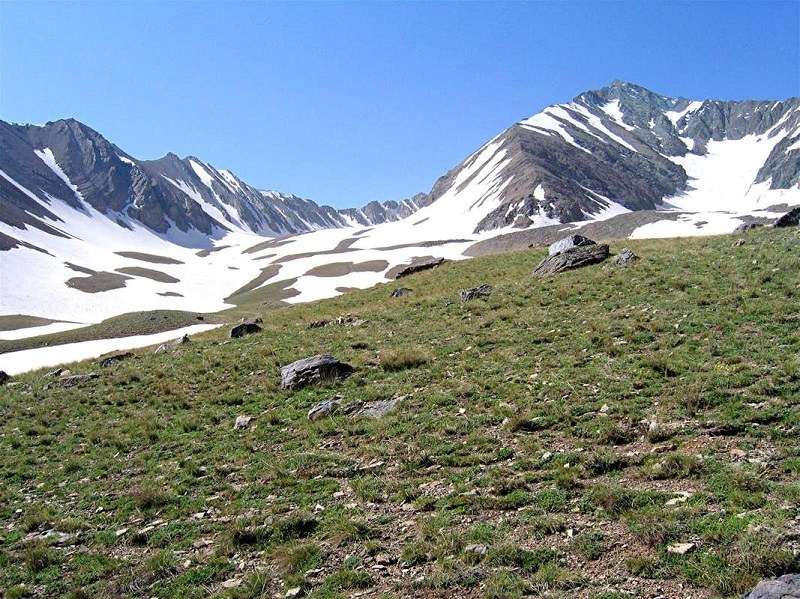 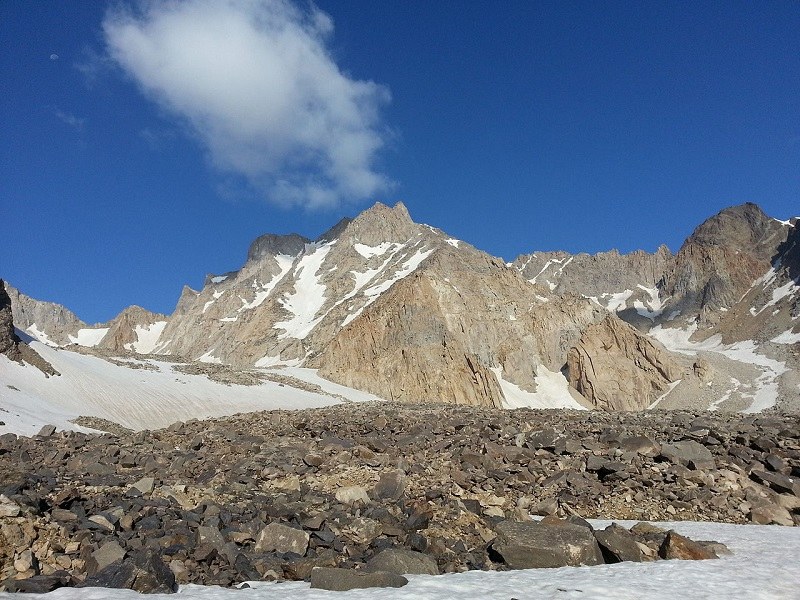 This mount is located in Takht-e Soleiman mountainous region of Mazandaran Province and Alborz Mountain Range. Its height is 4,348 meters.