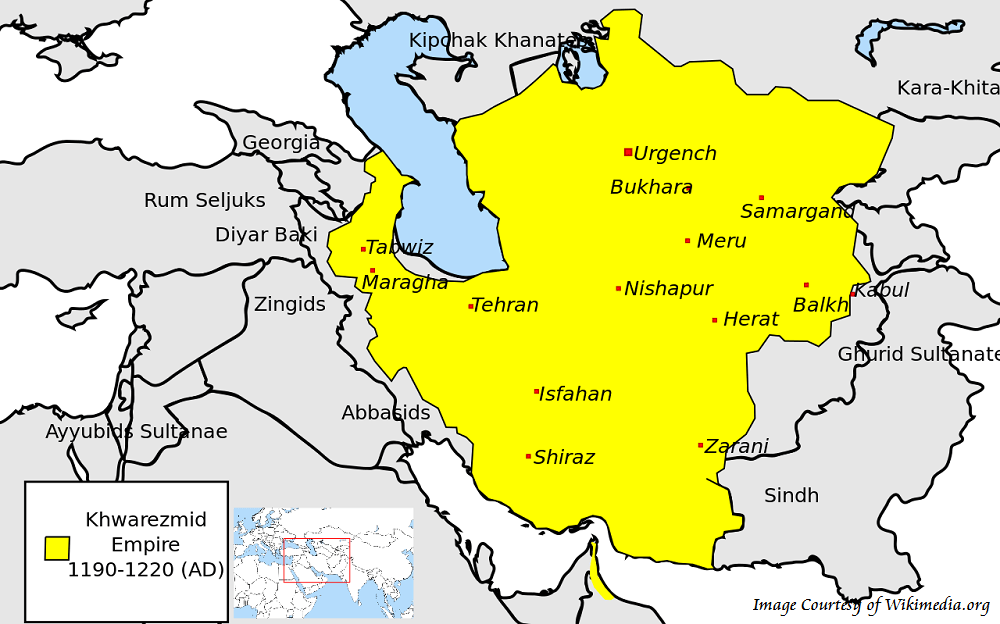 In the beginning, Seljuk kings appointed Khwarazmian to rule as vassals in Kharazm area. For a period of 30 years, such relations continued until the successors of Sultan Sanjar indicated their weak authority. Then, the history of Khwarazmian gradually started by gaining control over other territories of Seljuks and built up their ruling dynasty on the ruins of Seljuks’. After a while, they even managed to seize the territories of Iraq’s Seljuks as well. They gained lots of power so quickly that turned into real threats to the Abbasid Caliphs in Baghdad.

The Start of the History of Khwarazmian

Anush Tigin Gharchai founded Khwarazmian dynasty and his son, Qutb ad-Din Muhammad I, was his successor.

Tekish was the first king of Kharazm who started this extensive military campaign of gaining power and territories. Tekish managed to establish close relationships with the Oghuz and Qepchaq tribes. Such a link resulted in recruiting them into his army. He used this military-empowered relationship for his expansionist purposes later aimed at Persia.

His successors continued his policies. Such horrendous policies of Kharazm shahs had cast such fear in people’s hearts that Khwarazmians’ army lost its popularity and became a subject of hatred everywhere.

Khwarazmians extended their borders in the Transoxiana region so much that they became neighbors to Tatar tribes (Mongols). This brought them dreadful consequences for which Iranians had to pay a very high price. Having had lots of military victories, Khwarazmians’ army set off for Baghdad. The Abbasid caliph did not surrender to them. The army of Khwarazmians underwent major losses and pulled back to Khorasan.

Almost simultaneously with this defeat, Chengiz Khan sent some Muslim Mongol merchants with friendly messages to Khwarazmians. There were rumors spreading everywhere in Iran that they had been spies. Authorities ordered the killing of all 400 of them and confiscated their presents! This was the beginning of the decline in the history of Khwarezmians.

Later, Chengiz sent his emissary to Iran with an objection message. They killed him too. These events drove Chengiz extremely outrageous and caused him to wage a deadly dreadful invasion on Khwarazmians’ territories. The army of Mongols wiped out all cities in its way. It was only then that Khwarazmians understood that they had had wrong information about Mongols’ qualitative and quantitative capabilities.

The Outcome of Khwarazmians’ Rule for Iranians

The outcome of Khwarazmians for the people in Iran was the constant fear of the presence of the army of Kharzm shahs. Finally, as a result of these kings’ policies, Chengiz exerted such a devastating attack on the innocent people that the entire country had to tolerate huge losses of lives and properties for 40 years.

This was just the first attack that took 4 years. After 40 years, a second war broke out by Mongols attacking Iran. Chengiz Khans’ disproportionate revenge was carried out under the pretext of Kharazm shah’s maltreating his envoys.

Khwarazmians continued their lives as mercenaries who were hired in Northern Iraq. Later, they invaded toward the south toward Egypt and seized Egypt. Since this occupation, the city fell under Muslims’ control until 1917, when Ottomans took control of the city with the help of the British forces.

The rule of Khwarazmians came to an end and Iranian people had to pay a historic price for it, which took centuries to heal. Many city dwellers had to take their belongings and resort to the mountains. They took their valuable objects and animals to survive. So, a new wave of nomadic life started after settlement. This is a rare phenomenon in the history of civilizations.