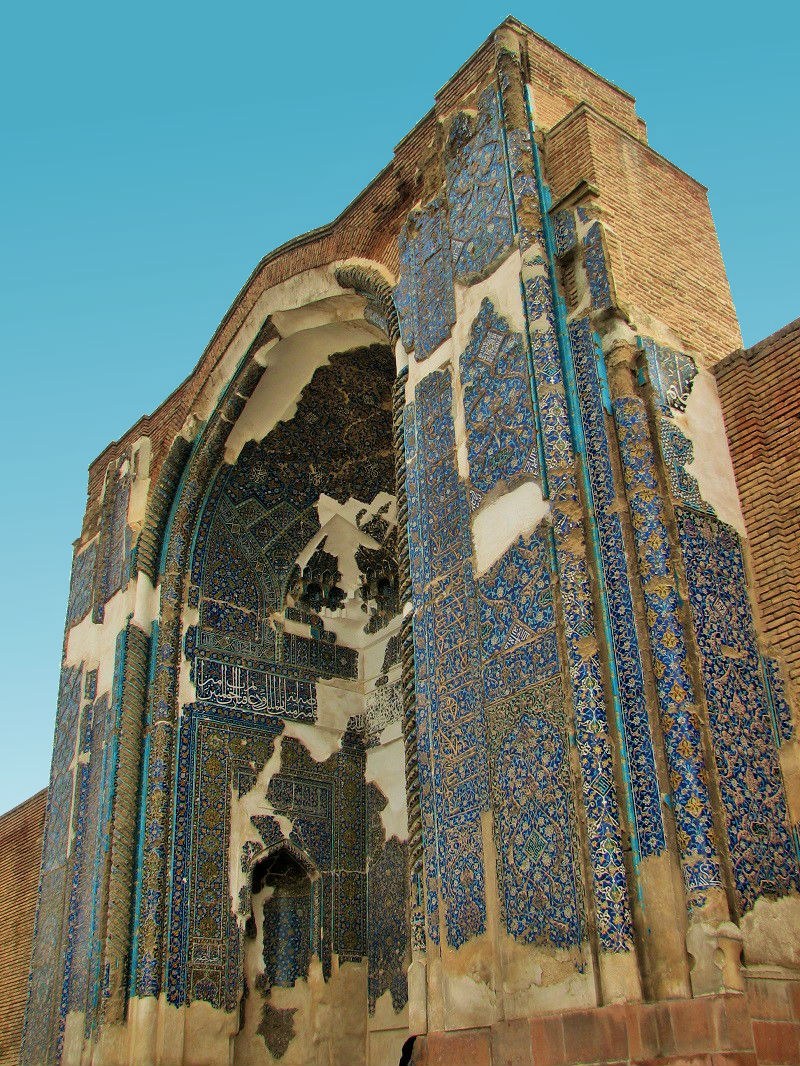 In Iran, there are many masterpieces that remained from the Kara Koyunlu era architecture, scattered throughout different parts of the country. As one of the major origins of Ilkhanid and Timurid architecture, Tabriz represents this style (known as Azeri style) in Iran. The Blue Mosque of Tabriz is the most prominent manifestation of this style in the city.

The Blue Mosque (Göy Məscid in Turkish, Goy Machid) or Jahan Shah Mosque is a historical mosque of Tabriz. “Göy” in the Azeri-Turkish language means blue and “Məscid” means mosque.

The mosaics on the very high transom of the mosque and the architectural features of the building have attracted the attention of visitors and archaeologists throughout history.

History of Construction and Restoration of Blue Mosque of Tabriz 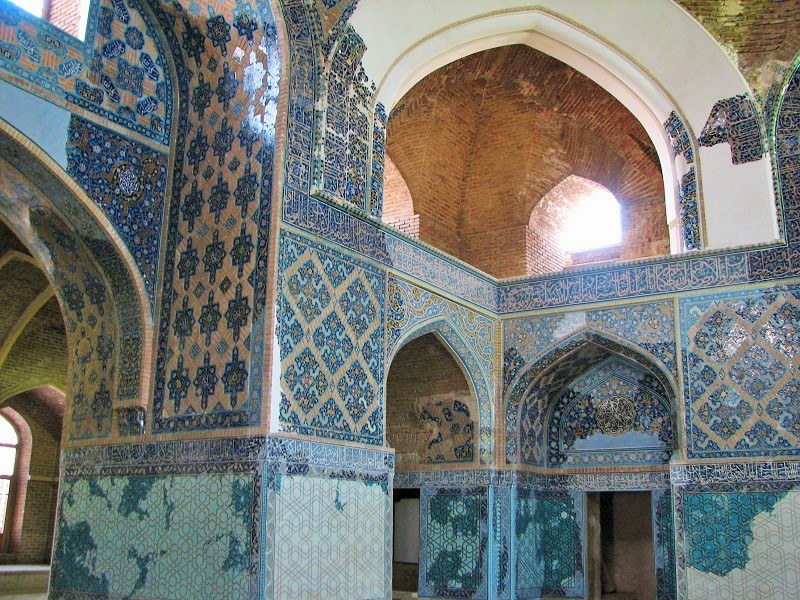 Abol Mozaffar Jahan Shah ibn Qara Yusuf, a leader of Qara Qoyunlu, was the founder of the Blue Mosque. However, the construction of the mosque was under the supervision of his wife, Jan Beigum Khatun, or, according to some historians, his daughter, Saleheh.

The architects built the monument completely during the reign of the Kara Koyunlu in 1400 AD (about 600 years ago). On the other hand, the variety, elegance, and ultramarine color (Persian blue) of its mosaics have made it famous as “Turquoise of Islam”. The architectural style of the Blue Mosque is that of Azeri.

The earthquake of 1779 destroyed the Blue Mosque of Tabriz. The architects rebuilt it. Furthermore, in 1966, Mr.Reza Memaran, a skilled Iranian architect, reconstructed the mosque.

Most sources and travel writings estimate that the construction of the mosque last about 30 years. The dome of the Blue Mosque is one of the greatest brickworks of Islamic architects of the 15th century.

Azeri style is the third traditional architecture school in Iran after the advent of Islam. The style began with the conquest of Maragheh city by Hulagu Khan and ends with the beginning of the Safavid dynasty.

Historically and architecturally, the Azeri style is divided into two distinct parts:

The construction of a bottleneck between the dome itself and the domed chamber, the creation of rough surfaces in the building, and the use of mosaic decoration are among the features of Kara Koyunlu architecture. 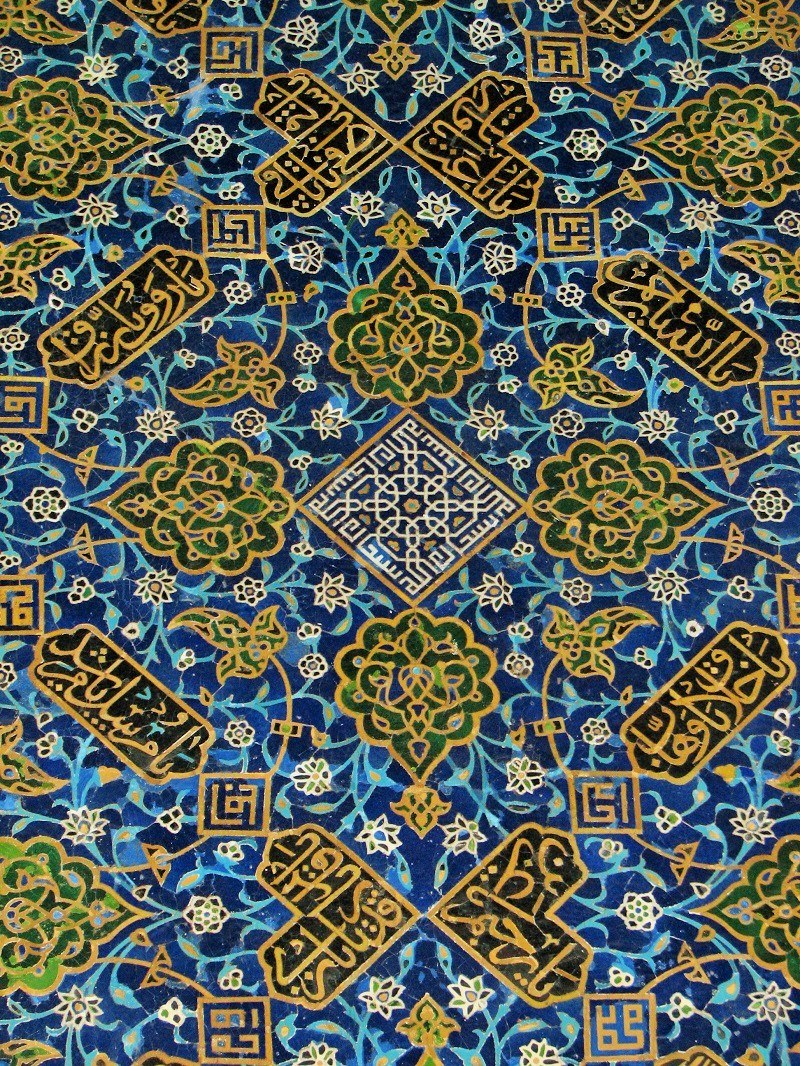 In general, we can summarize the features of the Azeri style of architecture as follows:

Other Features of the Blue Mosque

The magnificence of the Blue Mosque is admirable due to its many annexes, such as Mozaffriyeh mansion, Khanqah, courtyard, and inner sanctuaries, library, reading room, and spring house. Furthermore, the location of this building in the city center of Tabriz and along the Silk Road has added to its importance.

In a part of the ceiling of the Blue Mosque, there is a combination of gold and Azure. This art is unique in its kind. Inside the mosque and in its small Shabestan, there is a basement where there are two tombstones. It is most likely that the two tombs relate to Jahan Shah and his wife.

The stones used in this mansion are rare and unique. It is clear from the remnants of the mosque that the architects bonded the bricks with gypsum. The courtyard is square and has a howz (symmetrical axis pool) for Muslims’ ablution. The nearby Shabestans are used as a school for Islamic sciences students and sometimes as a shelter for poor people.

At the front of the courtyard and facing the Qibla, there is the main building of the mosque that is an enclosed, covered, and square-shaped space. The distance between each of the foundations of the barrel-vault is 12 meters. The barrel-vault is located on the four foundations of a square-shaped area. On top of this building, there was a dome made of bricks, but it has collapsed.

The division of the dome’s weight on its numerous foundations has made it one of the finest examples of architecture in its time.

In the Blue Mosque complex, the architects used color images instead of long texts. That was an innovation in facilitating the perception of the audience at that time.

Many engineers worked to build this mosque. The architecture of this magnificent building with its dome-shaped Shabestan and lateral chambers shows that the architects were expert in geometry, art, and mathematics.

Professor Hossein Nakhjavani, a scholar of the ancient history of Azerbaijan, believes that in the two parts of the entrance, there are the most delicate and most expensive mosaics in the world. The width of the white lines of the flowers varies from 2 to 3 millimeters, and in the middle of the word, the Arabic sentence “God has said” is written with blue color in Kufic mosaic inscriptions.

Why You Should Visit Blue Mosque?

We recommend you to watch closely the altar mosaics of the mosque with the beautiful mosaics Muqarnas, Islamic designs, and tile work with Turquoise, Persian blue, White, and Golden colors. 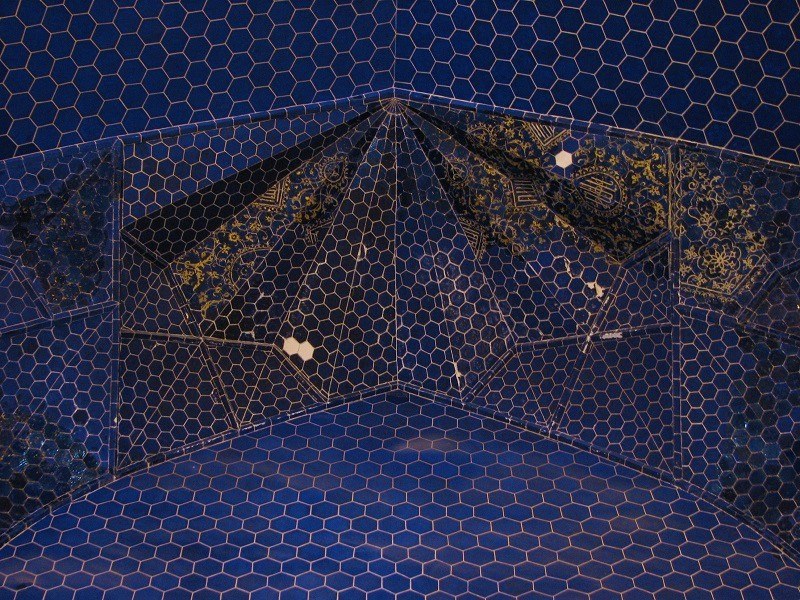 The Blue Mosque has unique features that call you to visit closely. The best time to visit the Blue Mosque is in the daylight when the sunlight glitters inside the mosque. The colors are pleasant and unique.

Make sure you don’t miss the visit of the tombs of Jahan Shah and his wife, Jan Beigum Khatun. Sometimes, visitors do not notice the tombs.

The Natural & Cultural Landscape of Alamout