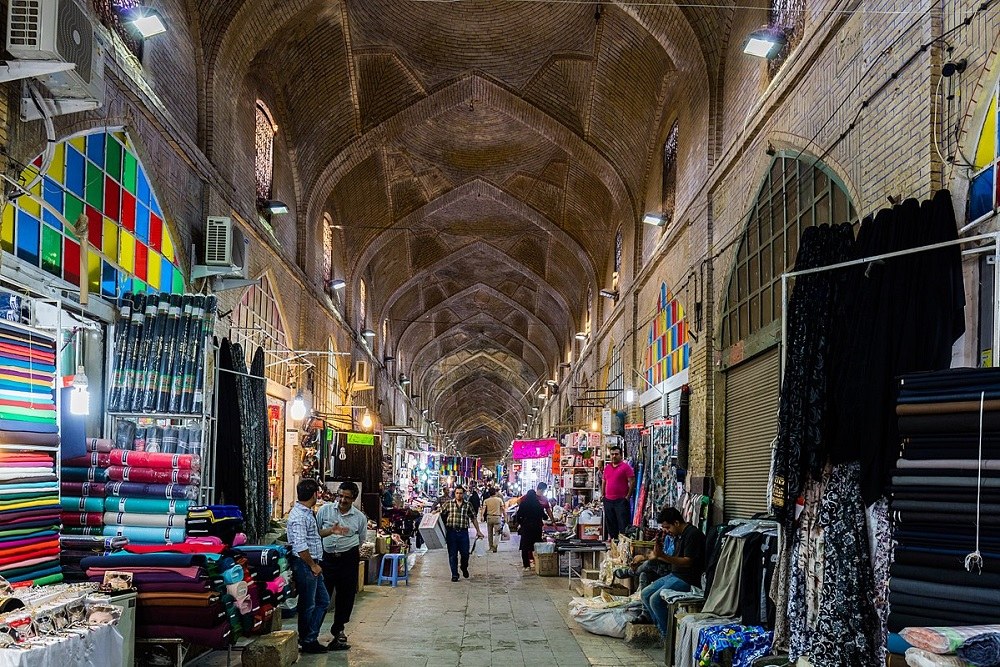 In most cities in Iran, the life and prosperity of business are completely dependent on the bazaar and its activities. Larestan County, including Lar city and its suburbs, relies also on its bazaar.

Larestan County is located in the southern part of Iran. Its weather is warm and dry. The agriculture has no chance to be successful there. However, due to its location between the two major cities of Shiraz and Bandar Abbas, the county has become a strong economic center at this part of Iran.

Lar city is located on an important road that connects central Iran to the Strait of Hormoz, Persian Gulf. Larestan is also one of the richest cities in Iran, as there have been many trade exchanges between Lar and Arab states of the Persian Gulf for centuries.

The function of the bazaar in this city is definitely determinant and vital. That is why about 900 years ago, architects decided to build a bazaar, called Qaisariye bazaar in Lar.

Introduction of the Bazaar of Qaisariye in Lar

Based on historical findings, Qaiserie Bazaar of Lar is the oldest bazaar in Iran. This bazaar has a complete set of functions. There are artistic manifestations of traditional Iranian architecture from pre-Safavid to Qajar dynasty. Several caravanserais are located around the bazaar, which was once accommodating business travelers.

The earthquake of 1960 in Lar and its suburbs did not harm Qaisariye bazaar and the surrounding caravanserais. Thus, we can say that the traditional bazaar of Lar has got a very solid structure. As there are many stones and rocks in Lar and the nearby mountains, the stone is the main construction material for building the bazaar.

“… This bazaar is undoubtedly one of the most beautiful and most sumptuous monuments of Asia and can be compared to the most luxurious European shopping centers…” describes Don Garcia Silva Figueroa, who traveled to Iran in 1827.

Over the years, the different architects have rebuilt and repaired the bazaar of Lar, but it has retained its shape and design unchanged for the last 400 years. Under Shah Abbas, this bazaar experienced a fundamental repair.

Today, Bazaar of Qaisariye in Lar is a living active bazaar in the city of Lar and is an important economic center of the city, while the surrounding caravanserais do not have the former function and local people use them as a stockroom.

Architectural and Structural Features of Qaisariye Bazaar of Lar

The design of the Qaisariye Bazaar is cross-shaped. Architects of this structure put an octagonal dome, on a high altitude, in the center of the cross. The height of the ceiling is about 18 meters from the bazaar floor. The ceilings have openings to get light in at the highest point of each arc.

In the traditional architecture of Iran, people call such openings in the bazaar ceilings “Hoorno”. The Hoornos function both to get sunlight in and the air ventilated. Due to the high ceiling of this bazaar, such air conditioning system functions well in summer. In hot summer, the inside climate of the bazaar is ten degrees cooler than outside.

In a few parts of Iran, one can see the barrel-arches as high as the arches of the Lar Bazaar. According to the architects, the most interesting part of Qaisariye bazaar is the Chahar-Suq, a central domed quadrangle design, which is unique in its kind. The Chahar-Suq has its own supporting structure at its corners, called Khashkhashy, supporter. We can see this architectural element in some mosques in Iran, including Imam Mosque of Isfahan.

The main passages of the bazaar connecting to the central area are the “Rasteh”. The name of the area allowing to go around the central area is “Gholam Gardesh”, Gallery. In Qaisariye bazaar of Lar, Iranians’ pre-Islamic worldview, perception as well as cultural and scientific insight have influenced the composition of the central area and galleries. Therefore, the plan of this bazaar has a simple and clear function.

Each passageway in the Bazaar of Qaisariye in Lar has a special name:

By visiting the bazaar of Lar, we will find our five senses activated. Seeing the light and color, hearing the voices of children, vendors and people trading, feeling the smell of different spices, tasting Masghati, the famous sweet of Lar, and touching the stone texture of the walls are all enjoyable experiences for visitors.

The architects have designed the traffic on the traditional bazaar in a way that we can see all the cell-shaped stores, “Hojreh”. In addition, due to the simplicity of the plan, the newcomer strangers would not be lost in it.

Why should you visit the Bazaar of Qaisariye in Lar?

If you are interested in discovering the historical bazaars of Iran, we suggest you visit Qaisariye Bazaar of Lar. Visiting this bazaar, you will get a new insightful opinion of the architecture of the southern part of Iran. You will also be acquainted with the structural and climatic solutions of traditional architects in the creation of large buildings.

Qaisariye Bazaar of Lar shows you the archetype of the historical bazaar formation in Iran. In addition, you will discover the sense of business and commerce in ancient Iran. The Lar Bazaar’s ambiance is still traditional. The vendors of the same guild work in the same place and next to each other. Prices are fair and competitive. In a word, the calm spirit prevails in the bazaar! This pleasant setting is completely different from the contemporary shopping centers.

Choose Where to Stay in Iran before Your Tour Begins