Going through the menu in an Iranian restaurant, you can find Kashk-e Bademjun among appetizers. It’s a kind of traditional food cooked and served throughout Iran. Outside Iran, some people call it eggplant dish. Two main ingredients in this Iranian appetizer have made the name:

Kashk, whey, is a whitish dairy product made from yogurt or sour milk, and has been used traditionally in Iranian cuisine. It’s produced through a long process and the final product comes out as dried solid pieces or a thick liquid. It can be both eaten plain and used in cooking. This sour dairy product is available in most Middle Eastern markets. And Bademjun is the Persian equivalent for eggplant.

Although Kashk-e Bademjun is mostly regarded as an appetizer, it can be also served as a light meal for dinner.

1. Full a big bowl to half with cold water. Dissolve about 1 tablespoon salt in it. Slice the eggplants lengthwise into 3 or 4 pieces and soak them in the bowl for about 1 hour.

2. In a colander, Rinse the eggplants with cold water and let them drain. Then, immediately, fry them in a pan over medium heat until golden brown at both sides.

3. Mash the prepared eggplants using a potato masher or a fork until it gets chunky, not a complete paste. Set it aside.

4. Grate one of the onions and the garlic cloves. Fry them over medium heat until golden. Add about 1 teaspoon turmeric powder. Stir for a few more minutes, and then remove it from heat.

5. In a pot, mix the mashed potato, prepared onion and garlic, and ground walnut. Set the mixture aside.

6. Dilute the kashk with about ½ cup cold water in a boiling pot. Put it over high heat to bring it to a boil. Then reduce heat to low, and let the kashk boils for about 20 minutes. Meanwhile, you can prepare the mint and remaining onion.

7. Slice the other onion into thin slivers. Fry it until golden. Add a little turmeric powder. Stir a few more minutes. Remove it from heat and set it aside.

8. Heat 2 tablespoons oil in a frying pan over low heat until sizzling. Add the mint. Stir it continuously and continue heating for just 1 minute. Then remove it quickly from heat because it can easily burn.

9. Mix the boiled kashk and 2/3 of prepared mint with the eggplant mixture thoroughly. Heat the pot for about 15 minutes with the lid off. When the eggplant is completely tender and you have a thick and paste like mixture, it’s ready to serve.

How to Serve Eggplant Dish:

Transfer this Iranian appetizer into a serving bowl. Use some more kashk and walnut, fried onion slivers, and the remaining sautéed mint to garnish. This food can be served with table vegetables, pickles, and sliced raw onion. And like most of Iranian traditional foods, Doogh accompanies the meal as a favorite drink.

Spoon a small amount of Kashk-e Bademjun onto a piece of bread and put it in your mouth. The taste and smell is so tempting that you’ll be hooked. 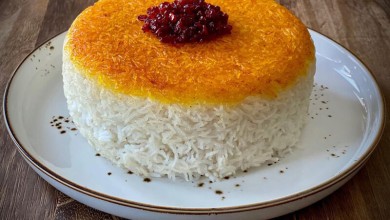 How to Cook Tahdig; Delicious Specialty in Iranian Cuisine 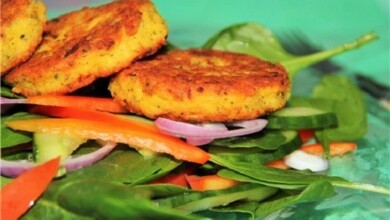 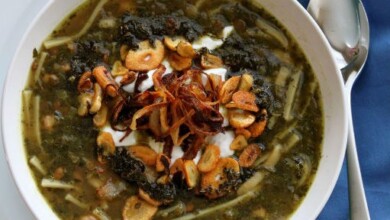 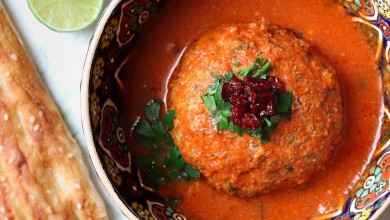