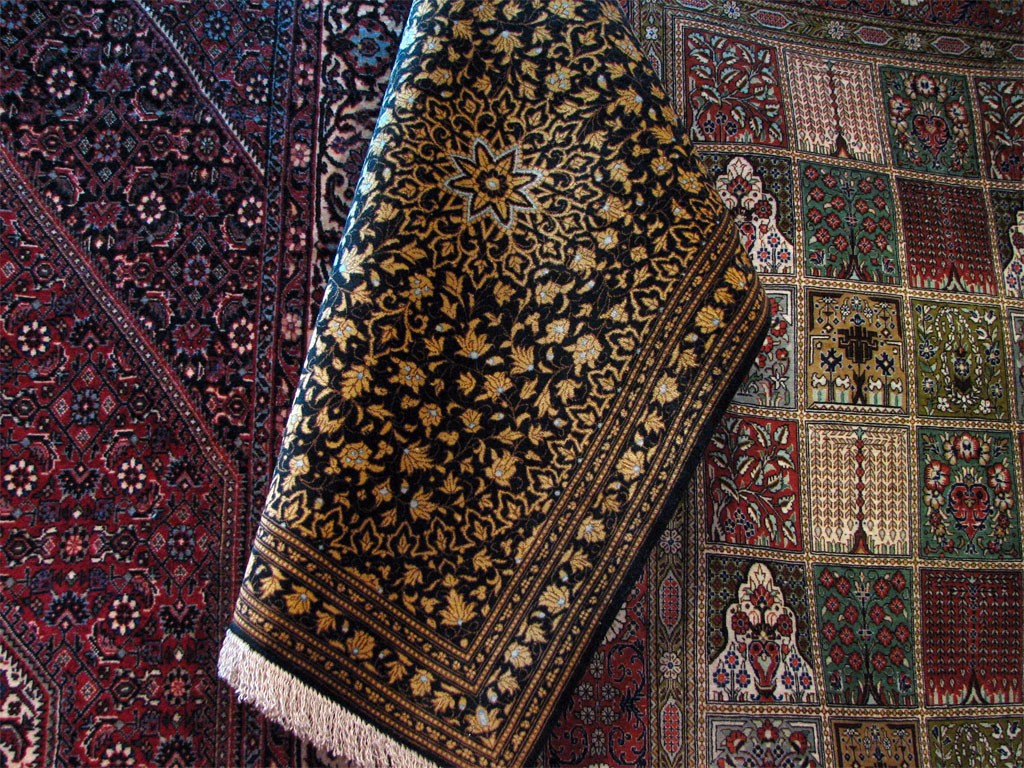 Iranian carpets (it is more known as Persian carpets) are very much famous among the oriental carpets all around the world. The finest Iranian carpets are usually Iranian carpets made by Iranians. These carpets reveal the Iranians’ mastery of their traditional art in selecting materials, knotting and dying techniques and creating patterns and designs. I invite you to study carpet designs in Iran so that you learn more about Iranian culture.

Iranian Carpets/rugs reveal a link between the producers and their wishes, beliefs, and needs. They also reflect the living conditions and cultural status of the artist, as well as the region’s climatic conditions, botanical resources and geographical conditions.

Iranian carpet designs, patterns, and motifs have been derived and inspired by nature, history, and myths. In fact, the roots of carpet making must be sought in nomadic life from which it found its way to the villages and cities. Nomads use the wool of livestock and the dyes made from a variety of plants or mineral resources.

Carpets not only have everyday usage but are also regarded as objects of art indicating Iranian culture. The Iranians nomads make beautiful carpets/rugs to cover and decorate floors and other parts of their tents. They also weave kilims, blankets, saddles, tent ribbons, etc.

Carpet designs in Iran have an interesting story: through making thousands or millions of knots by dyed threads with or without an already drawn design on a sheet of paper, a beautifully designed carpet is completed. Nomads create motifs and patterns without any such drawings and by simply referring to their imaginations and all they have learned from their ancestors. Only city carpet makers use drawings to create designs.

The overall design of an Iranian carpet/rug consists of background design and that of the margins. The margins make a frame around the main body of the carpet and usually have three sections: inner, outer and main sections. The size and pattern of the carpet determine the main margin’s design.

Carpet designs may be broadly categorized into two types:

Of course, many of them have other variations. Please go over the most famous Iranian carpet designs here:

Triangular Citron (Lachak Toranj): First used for the decoration of leather book-covers, it is one of the most beautiful and popular Iranian designs. It has been used in carpets since the 16th century. The citron design is usually round and sometimes elliptical. One-fourth of a citron design appears at every angle of the carpet’s main body.

Prayer Niche (Mehraby): This design has been inspired by arches as well as prayer niches of mosques, but some other decorative elements like columns, flowers, and leaves have been later added to it. The variations of these designs are named after the name of the added elements.

Vase (Goldany): This design consists of various types and sizes of flower vases, which are sometimes full of flowers, and fill the main part of the carpets. Sometimes a number of symmetrical or otherwise arranged vases are made to decorate the entire carpet. It started to be made since the Safavid period. The variations of this design are the two side vases, the Mehrab Vase, and the Zell-o-Soltan Vase.

Framed (Qabqaby): This is one of the famous carpet designs in the art of carpet making. Sometimes the designs of its four-sided frames are the same, but in other cases, these designs differ from each other. The inspiring source of this design is the inlaid wooden handicrafts motifs.

Tree (Derakhty): This design includes magnificent trees, especially cedars and weeping willows, seen on the carpets of royal courts, while simpler trees are seen in those made by villagers and nomadic tribes.

Aigrette (Botteh): This design has been used for thousands of years among Zoroastrians as their sacred cedar. Later they were used on precious carpets and other works of art.

The aigrette design has several variations in small, medium and large aigrettes:

The aigrette design and its variations are very popular in Khorasan, Kerman, Kurdistan, and Markazy Provinces and among Qashqai and Bakhtiari tribes where it is known as Qobad Khany and Garden design respectively.

Shah Abbas: This design is based on a floral pattern, which has been popular since the Safavid period although the sacred pomegranate blossoms of Zoroastrians are its source of inspiration. Its abstract floral designs combined with Arabesque designs comprise the main pattern and the margin of these carpets. There are several variations of the Shah Abbas design like the Sheikh Safi, the Floral and the Animal designs.

Arabesque (Eslimy): This design consists of plant-like curved patterns and has got a long history in ancient Iran’s decorative arts. The Persian word for Arabesque (Eslimy) has probably been derived from the word Eslimy meaning bud.

One of the most famous types of this pattern is the Dahan Azhdary found in abundance in the Bijar carpet. In this form, the ending part of each branch is divided into two parts that resemble the jaws of a dragon.

Portrait: This is a design prohibited to be made as Islam entered Iran. It was interpreted as against the principles of Islam at that time. Safavids allowed it again to be implemented to portray kings and world-renowned men like Christopher Columbus.

Abraham Lincoln, George Washington, Alexander, and Napoleon are among the famous men whose portraits have appeared on such carpets. These carpets are mainly made in Kerman and Tabriz.

European Flower (Gol Farang): This design is depicted mainly on Kurdistan carpets, particularly in Bijar. The floral patterns in this design do not resemble those appearing in Shah Abbas or Arabesque design.

Mixed Fish: Made first in Herat, it is also known as the Herat design. Herat was an Iranian city before Afghanistan’s independence. This design has four fish around a carpet. The picture of the fish is, at times, so abstract and stylized that it hardly resembles a fish and looks more like a leaf.

This design is popular in Kurdistan, Azerbaijan and Markazy Provinces. It is also known as Farahan design because the carpet producers of Farahan are experts in creating such designs.

Striped (Moharamat): In this design, the carpet is decorated with broad and narrow strips of different harmonious colors. In some areas of Iran, this design is also called Qalamdany design.

Four Seasons: This is one of the most interesting carpet designs used since the last few centuries. It consists of four pictures, each depicting one season of the year. These beautiful carpets used to be made only in Tabriz and Heris. Today they are made in other parts of Iran as well.

Scattering (Afshan): This is a design mostly worked out with lots of flowers, leaves, branches, and plants, which are scattered in different directions. There are many variations in this design, but Minakhany is the most famous one.

Turkmen: This is a design peculiar to Turcoman people, in which the broken lines compose the patterns. There are different variations of this design as well.

Hunting Field: In this design, various kinds of wild animals and birds together with trees are seen. The animals are usually lions, gazelles, wolves, leopards, and deer. Real and legendary animals are usually depicted on different corners of the carpets. In pre-Islam Iran, this design was used in potteries and textiles. During Safavids, it became popular to create them on the Iranian carpets.