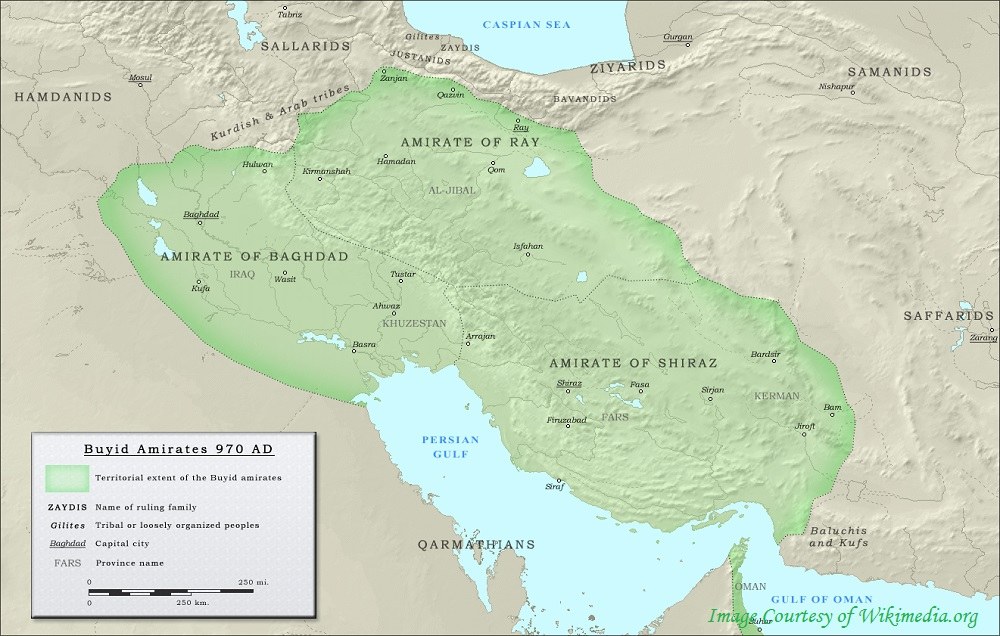 The history of Ziarids and Buyids, who were two Iranian families, started from the south of The Caspian Sea area. The area where they came from and rose to power is today called Gilan and Mazandaran provinces. These areas were ruled by autonomous local dynasties since the pre-Islam era. For example, under Anushiravan, Khosrow I, Sassanian period, there were local governments there.

After Arabs’ invasion in various parts of Iran, Tabarestan and Daylaman in those areas remained untouched. They had their ancient traditions and even beliefs. This continued until some Shiites and followers of Zeidyeh took refuge there. The local people accepted them in their areas.

Little by little some movements were formed in opposition to Baghdad’s caliphate system. Local people also supported them. These developments were simultaneous with Samanids ruling from Bukhara. Despite Ziarids, Buyids, and Alavids, the major part of mountainous areas of Tabarestan remained under the reign of the families who were the descendants of Sassanians.

Mardavij, son of Ziyar, from Daylam at the south of the Caspian Sea, gained control of the entire area in 928. Also, he conquered other cities further south like Rey, Hamedan, etc and even Isfahan, but he was killed in Isfahan before he could accomplish what he had in his mind. He had mentioned once that he had planned to bring the Sassanian monarchy back to power in Iran. He also planned to move the capital of the country to Mada’en, near Baghdad.

After his death, his brother, Voshmgir, stepped to the throne in Rey. He was not able to preserve all the previously conquered areas and rule in them. So, he went to Mazandaran to remain and rule there. He had to suffice to the power over Gorgan and part of Mazandaran. His battles against Buyids ended up in defeat. Therefore, He asked Samanids for help, but his requests remained unanswered.

During Voshmgir and his successors, Ziyarids’ authority could not go beyond Gorgan, Mazandaran, Gilan, and Semnan. The descendants of Mardavij did not follow his great dreams of reviving ancient Iran. They had lost lots of their energy and resources as a result of fighting against Buyids.

In 1042, Ziyarids were overthrown by the Ghaznavids.

Buyids’ movement was against the caliphate system. It was motivated by Shiite orientations and some Iranian sentiments. Unlike some Ziarids like Mardavij, they refrained from some extremist activities. Abu Shoja’ Buye has three sons called Ali (later Emadoddolleh), Hasan (later Roknoddoleh) and Ahmad (later Moezoddoleh).

They formed local governments in different parts of Iran. The government of Baghdad had become very weak during that period. Baghdad’s caliphs were drowned in pleasure-seeking and extravagance. They had also turned to be extremely brutal to save their lives and power.

Having realized how the conditions were in Baghdad, Ahmad set off to seize Baghdad. He succeeded in dethroning the caliph and assigning another caliph there. As he achieved to establish stability and justice in Baghdad, He gained plenty of popularity among people. After his death, his son and grandson did not have his wisdom and efficiency to stay in power.

Azedoddoleh, son of Hasan, the wise governor of Fars ruling in central Iran, gained authority over Baghdad and north of the Mesopotamia. All the cities under his rule thrived. He built palaces, gardens, mosques, hospitals and promoted education. He was very much interested in Persian literature and culture.

Azedoddoleh had established an overwhelming network of systematic intelligence and inspection. His successors fought over power so much that they finally lost their power totally there until Togrul Beg entered Baghdad and put an end to Buyids’ rule and established Seljuk dynasty.

Certainly, the history of Ziarids and Buyids are full of ups and downs but indicate how Iranians strived for independence.

Daylamites were the local people living in Daylam, Gilan province of Iran today. They had been warriors since Sassanids’ era. They were resisting against Arabs’ invasion to the Southern part of the Caspian Sea. During the Buyids, they emerged and helped the ruling government gain control over much of Iran until Seljuks’ Invasion.

Although Daylamites believed in the Shiite branch of Islam, they showed religious tolerance toward the followers of other religions. They didn’t object to Ismailis and Sufis’ practices and never attacked them who were under their rule. There could even be found the followers of other religions in their administration. Unlike Ghaznavids’ domain of ruling, during Buyids, great Islamic philosophers were given a chance to appear and express their views.

The most important achievement of these Iranian governments was a gradual thought renaissance proceeding to bring Iranian culture into appearance. Such culture was beyond the Arabic-like court formalities.

A large library was opened in Shiraz. The number of books in Rey library had exceeded 200,000 volumes at the time of the attack by Sultan Mahmood. New copies were made from valuable books. Some of the Emirs and kings were men of letters themselves like Qabus, son of Voshmgir and Azedoddoleh. Like Shiraz, Esfahan also turned into a rival to Baghdad during this period.

Buyids took plenty of tax from people under various excuses. The properties of the rich were easily confiscated. The budget deficit was compensated this way. Emirs and Ministers had a share of the rest of it. Iranian community had witnessed a sever class difference under Buyids . The wealth of the rich was remarkably high, while the poor had to live in sever living conditions.

Obviously, because of the above-mentioned oppression and pressure on people, these rulers couldn’t stay in power for a long time. They lost their popularity soon and had to yield to new rulers as they didn’t have the people’s support.

E-Visa to Iran, A Convenient Solution for Tourists